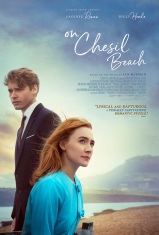 There are few things sadder than the road not taken. And few novels capture the tragedy of a single moment in time shaping a whole life’s course better than Ian McEwan’s On Chesil Beach. This slim novella starts as a romance but quickly collapses into a tragedy – and this film adaptation, adapted beautifully by McEwan, hums with a constant sense of sadness and gloom.

Edward Mayhew (Billy Howle) is a middle-class boy and would-be historian who falls in love with promising violin player Florence Ponting (Saoirse Ronan) in 1962, after they both graduate from their respective universities with first class degrees. But their wedding night is a disaster – Edward is in tune with the swinging sixties and flushed with sexual desire, Florence is still living with the values of the 1950s and extremely uncomfortable with sex (possibly connected to a past relationship with her domineering father, expertly played by Samuel West). A conversation on Chesil beach leads to a ruinous split – and for Edward a life of regret.

On Chesil Beach is a film that expertly demonstrates contrasts – between the oppressive 1950s and the more bohemian 1960s (sexual freedom, socialism, nuclear disarmament), and the skilful use of the rock ‘n’ roll favoured by Edward and the classical music that is central to Florence’s life. Dominic Cooke’s low-key, carefully structured film wonderfully balances these themes, showing throughout how cultural, social and relationship clashes can cause pain and strife.

Sex is of course the problem. At first nervous romance seems to be the theme – but it’s actually physical misunderstanding and incompatibility. Cooke’s film cuts back and forth from the wedding evening to fill in the gaps of their timeline that have brought Edward and Florence to this point, and explain their psychology going into this wedding night that will shape their lives. Edward has no understanding of Florence’s nerves and fear about sex, while Florence fails to effectively articulate these feelings in a way that Edward can understand or sympathise with.

Essentially, it’s a tragedy about a failure of communication and how hasty, ill thought out words and decisions can shatter an otherwise extremely happy relationship. Because there is no doubt – and McEwan makes it even clearer here than in the novella – of how this couple are perfectly suited together. Cooke’s film captures the halcyon dreaminess of their courtship in the giddy summer of 1962, in the beautiful Oxfordshire countryside. The film hums with their immediate attraction and strong feelings for each other – while also laying the groundwork of their failure to really and fully communicate with each other. The sexual encounter between them is agonising in its clumsiness, nerves, awkwardness, functionality and eventual total failure.

It works so well in these segments as both leads bring expressive, empathy filled performances to the screen. Howle is very good as a man struggling with his place in the world, who juggles bohemian ideals and longings with a keen desire to be seen as “a man”, to be well regarded by others. Ronan is also excellent as a young woman who in many ways is both ahead of her time and left behind it, ambitious and forward thinking but oppressed and terrified by physical contact. The tragedy is that she relaxes so much with Edward, but can’t bring herself to voice her concerns, fears and tortured history to him.

It’s that tortured history where the film leans a little too hard. The book holds dark suggestions that Florence may have been abused by her father, but in the film McEwan moves them from subtext into full-on text. Samuel West is very good as this intimidating figure, but the explanation that much of Florence’s sexual discomfort is directly related to ill-defined sexual misdemeanours from her father feels slightly pat. Far more interesting is the idea that she is simply scared of contact, and struggling to adapt the prim 1950s ideas she has been brought up with to the modern era.

But the film wants to give a deeper meaning to a drama that is more interesting when it looks at troubled psychologies at a time when the world was shifting from one generation to another. It remains a very slight story – and even at 100 minutes it feels like it is stretching the content of the novel – but also one that does carry a lot of emotional weight. The film’s coda, set in 2007, leans a little too heavily on the actors now layered under old-age pancake make-up (it’s noticeably not included in the novella, which gives no information about Florence’s future life at all) but it carries a real sense of sadness and loss for both characters, one of whom has seen their life drift into nothingness, another who has achieved but still carries a sense of sadness for a lost love. McEwan’s careful, elegant script captures a lot of this small-scale tragedy and if the film is slight and at times a little too obvious, it’s also able to induce a tear or two.