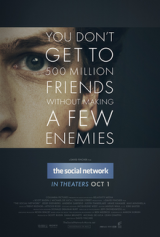 Nothing has changed our interaction with the world faster than the internet. And nothing on the internet has changed how we interact as much as social media. As it drives changes in the way we relate to other people, it’s a brave film that tries to capture this zeitgeist and turn it into an effective movie. The Social Network is a brave movie – and also a brilliant one, a defiantly modern and far-sighted movie that avoids being the sanctimonious message movie it could have become, by concentrating on personal relationships, drama and, above all, a strong and compelling story.

Its October 2003 and a 19-year old Harvard student Mark Zuckerberg (Jesse Eisenberg) gets dumped by his girlfriend Erica (Rooney Mara). So, he responds like many people today would – but not in 2003 – by writing a series of rude and angry blogs about her. And at the same time, he does something you and I wouldn’t be able to do – he builds overnight a campus website called Facemash that allows users to rate the attractiveness of female students. It’s a sensation – and a scandal.

Off the back of it, Zuckerberg is approached by the Winklevoss brothers (in a skilled double performance by Armie Hammer) to see if he’d be interested in building an elite social network, Harvard Connection, for them. Zuckerberg agrees – but did he independently already have the idea for Thefacebook, an elite social network for Ivy League students? Either way, with funds from friend Eduardo Saverin (Andrew Garfield) he builds the platform which is to become Facebook. Does it all end well? Since the story is framed around Zuckerberg in 2009, sitting in depositions while being sued by both the Winkelvoss brothers (“the Winklevi”) and Saverin, you can guess not.

Fincher’s film reflects its central character in many ways – cool, efficient, tightly wound, juggling intellectualism with simmering tension. It’s vibrant, fresh, razor-sharp, perfectly paced and superbly dramatic. It turns what could have been a terrifically dull story of very clever people typing lines of code into a whipper-sharp story of jealousies, rivalries and suspicions. It also brilliantly veers away from being a polemic. It could easily have made points – as many films have – about the “evils and dangers of that creepy thing the internet” or constantly reminded us how morally superior film-makers are to social media kingpins. It does nothing of the sort. Instead it’s a brilliantly insightful look at the birth of a phenomenon that also makes subtle, intelligent points about some of the behaviours that phenomenon led to. All while keeping us gloriously entertained.

A big part of the film’s success is in Sorkin’s superb script. The material is perfect for him. The character’s intellectualism fits with his pithy turn of phrase, while their perceptions of themselves as victims or on a moral crusade fits with his ability to write morality with empathy. It also helps that he is the master of crackling dialogue. The idea to structure the film around the depositions is also a master-stroke. Not just a reminder of what’s to come, it adds an air of artificiality to everything we see (perfect as well for Sorkin’s smarter-than-life dialogue) – after all, each scene is based on the filtered remembrances of people in the depositions. And all of them remember a subtly different story.

Sorkin and Fincher also manage to avoid having villains in play. It would be easy to make Zuckerberg a villain: many films would have done. But Zuckerberg here isn’t bad – it’s more that he’s tunnel-visioned, selfish and socially inept. Erica (a marvellous turn by Rooney Mara as the first victim of social media bullying) has a point when she says she dumping him not because he’s a geek but because he’s not really a nice person. But Zuckerberg’s actions – his betrayals as some read them – come not from vindictiveness but a shark-like moving forward that leaves people behind him. And he’s also, as the film is keen to show repeatedly, lonely. He has one friend – whom he sacrifices on the altar of his creation – and is ruthless at cutting people out of his life when they fail to meet the standards he has set them.

The film channels the skills of Eisenberg – whose range is not huge – perfectly here, in a role he was surely born to play. Eisenberg crafts his physicality in something hunched, oppressed and sullen while his flat voice is perfect for a man who expresses himself through his creation not his personality. He gives Zuckerberg both a ruthlessness, but also a strange lack of knowledge – constantly surprised that his actions have consequences that leave him alone. He makes him a true lonely god of the internet – the man who invented the biggest social networking centre in the world, but who doesn’t have a friend himself.

But it also makes clear that Zuckerberg lacks the usual flaws of his kind: he’s not interested, it seems, in money, riches, fame or drugs. To him, the prize is to do not to be seen to do. He makes a rich contrast with Sean Parker (a brilliantly charismatic Justin Timberlake), the creator of Napster, who briefly influences him but is primarily interested in the flash and bang that the retiring Zuckerberg isn’t. What he does have is the drive and ruthlessness that his friend Eduardo Saverin (a wonderful performance from Andrew Garfield as a marvellously sweet, but clearly naïve and out-of-his-depth man completely lacking the vision a project like Facebook needs) doesn’t have – and which makes Saverin unsuitable for thinking in the global terms Zuckerberg is.

And the film has little time for the Winklevoss twins. Played with chutzpah in a double role by Armie Hammer (who skilfully distinguishes both of them), Zuckerberg is right when he describes them as rich kids who had everything they ever wanted in life – and seem outraged that they can’t be given the rights to Facebook as well. As he points out they intended to do nothing other than come up with a concept. These rowers – in a witty touch their boat is sponsored by that dinosaur Polaroid – also represent the old elite under siege from new media. The entitled rich, who can’t comprehend that the world is being handed to them on a plate.

The film also makes for an intriguing meta-commentary on the growth of social media. From the trolling of Erica, through the bitter feuds and arguments, the he-said-she-said fighting of the depositions, and the quick shifts between friendship and rivalry, it also manages to capture the world of social media in a nutshell. The atmosphere where actions can explode in people’s perception, where statements you made years ago come back to bite you, where judgement and criticism are constant and the ability to communicate more easily also makes fights easier to start, seem more and more prescient.

Fincher’s film does this marvellously, with a wit and sense of dramatic flair that reminds me of a more grounded Network. Sure the scene at Henley-on-Thames is hand-in-the-mouth agonising for any British person to watch (it is littered with major errors from turn-of-phrase to its understanding of life in Britain), but when every other scene in it is perfectly done it doesn’t matter. Like any victory, Facebook has many people claiming to be its father. You could say the film about this film: superbly directed, a brilliant script and perfectly cast, it’s a triumph.