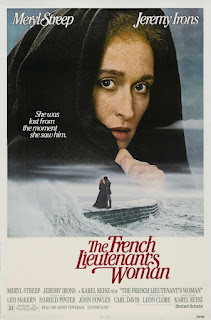 Many books have been considered unfilmable. John Fowles’ The French Lieutenant’s Woman is a key member of that list. Part pastiche, part commentary on Victorian novels, Fowles not only has a narrator who acts as an ironic commentator on events, but also offers up three possible endings to its central romance, each radically different from the one before. Not easy to bring that to film! Adapting it, Reisz and Harold Pinter came up with the concept of mirroring the novel’s central relationship with a relationship between two actors playing those characters in a film being made of the novel. Got that?

So, Meryl Streep and Jeremy Irons play both the novel’s romantically entwined couple Sarah and Charles AND also Anna and Mike, two actors playing those very roles in a film of The French Lieutenant’s Woman, also engaged in a love affair. Both affairs end in radically different ways, mirroring two of the alternative endings in Fowles’ novel. Most of the films runtime sticks with the novels’ plot, where Charles – an ambitious young scientist – is drawn away from his promising engagement to a potential business partners daughter (Lynsey Baxter), by his romantic fascination with Sarah, a woman of ill-repute in Lyme Regis, the former mistress of a French Lieutenant.

Pinter and Reisz’s adaptation is a smart idea. But I feel it misses a trick. If they really wanted to adapt the book – with its intrusive narrator and alternative endings – then the real character to focus on from a film set is not the actors but the director and producers. If our framing device had been watching the rushes in the screening room, seeing differently edited scenes play out in contrasting ways, with producers and director commenting on the action and making decisions about which ending (Happy? Sad? Open-ended?) they stick on the end of the film. Sure, that would have opened itself up to potentially on-the-nose dialogue, but it would be a better representation of the novel and its ideas, and truly translate some of the books real strength (its unique narrative style) to film.

But that’s talking about something the film doesn’t do. What it does do is offer something that is basically a 80% adaptation of the novel’s plot, mixed with 20% short interjections of the modern-day storyline. Deliberately, the film contrasts the intense romance and deeply-felt passions of the Victorian storyline – where acting on desire carries with it a huge, life-shattering cost in disgrace and social expulsion – with the shallow, off-hand flirtations of the modern era, where the stigma of a sexual affair has ceased to exist.

While this is effective in making the Victorian sections carry even more weight, it does mean the modern sections (by design) are slighter and less engaging. Their semi-regular appearance – it isn’t until the final half hour that we get anything approaching a proper sequence set in the present day, with a beautifully played garden party hosted by Mike and his wife (a magnificent putting-on-a-brave-face performance from Penelope Wilton), which is a feast of stolen glances, averted eyes and strained conversation.

But in some places the split narrative works a treat, particularly in allowing flashes of the real life, more unrestrained passion of the ‘real’ people drop into the Victorian characters. In particular, a meeting between Charles and Sarah in the woods (highly reserved), cuts to Anna and Mike rehearsing the same scene (playful and flirtatious). When the rehearsal reaches a key point – Anna/Sarah falling and being caught by Charles/Mike, the film cuts so that Anna falls but then Charles catches Sarah falling. And the scene continues. Suddenly, the Victorian couple has a burst of the same sexual freedom the modern couple has. It’s a beautiful cut. Later, Sarah falls to the ground (pushed by Charles), and suddenly bursts out laughing – and it feels like she falls as Sarah, reacts as Anna, then rises again as Sarah – either way it gives a wonderful, modern energy to the moment.

The film is wonderfully shot by Freddie Francis, with luscious forest vegetation and whipping winds and seas on the Cobb at Lyme Regis. Simmering sexual tensions are caught in lingering gazes, gestures that carry things words cannot, careful reaction shots captured by Reisz, the trapping of several characters within the ephemera of over-decorated rooms (at one point Ernestina literally can’t escape a room because of the all the knick-knacks within it).

A lot of the mood comes from the two lead actors, who give masterful performances. It’s very easy to see Streep’s performance here as overly mannered: her accent is oddly toned and highly studied, and much of her performance as Sarah is wilfully artificial and arch. But that’s deliberate: the genius here is that Streep is playing Anna playing Sarah who is in turn constructing her own fictional Sarah. With her pre-Raphaelite looks and artistic leanings, Sarah is a woman out-of-time, yearning for the sort of choices and freedom Anna takes for granted, constantly pushed into roles society can accept her in (Governess, eccentric, ‘whore’ etc.). Does she use Charles or not? Streep brilliantly captures her enigmatic, unreadable spirit, the sort of person who interjects a retelling of a possibly invented backstory, with a playful twirl around a tree. Who sometimes despises herself, at others everyone else. In contrast, Streep makes Anna assured, quiet and confident, with the power to choose risks.

Just as good is Jeremy Irons, in only his second film role and here cementing the start of a career that would see him play a parade of restrained and very British men struggling with passions they can hardly understand. Charles’ fascination with Sarah is rooted in feelings both sexual and romantic that both fascinate and terrify him. His final surrendering to being true to himself, rather than what is expected of him, carries with it both a power and strange desperate bitterness. By contrast, Mike is a far more flighty, shallow-figure – an actor who perhaps is more in love with the feelings he is playing (and the character that inspires them in his character) than he is with Anna.

Reisz pulls all this together highly effectively, and the film is at its strongest when exploring feminism and the opportunities for women in Victorian England. Those are few and far between. Women have defined roles and expectations and someone who deviates from these – like Sarah – have no place. In addition, women are held responsible for provoking dangerous erotic feelings in men (from women of poor reputation like Sarah, to the prostitutes in a London street). The ability of Sarah to make her own choices and lead the life she wants to lead is the underlying theme of her story – and her motivations. Does she want, however she might feel, a relationship that would define her again as “wife” rather than being truly herself?

These are fascinating ideas in a film full of beautiful images – their first meeting on the Cobb in particular is beautiful – scored expertly by Colin Davis (with just a tinge of suspense in the music). The framing device gives little moments of insight and reflection – even if it is only an approximation of the novel’s effect – but the Victorian set story, and it’s buried passions and social commentary is what really compels, in a way that the slighter modern story (almost deliberately) doesn’t. Either way, it has two brilliant performances, an intelligent script and handsome direction by Reisz.