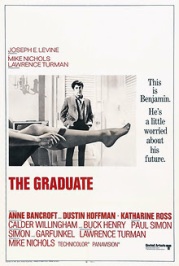 In 1967, the world went crazy for The Graduate. This comedy of manners and sex tapped into a whole generation’s growing sense of rebellion. Who wants to be told their life has already been mapped out for them? The Graduate seemed to capture that mood and was celebrated as the ultimate example of how someone could break out of the mould. It’s a young person’s film, and perhaps you need to be young to watch it. The older you get – and the further away from those dreamlike days of the late sixties where everything seemed possible – the more the film feels like an amusing but soulless story, with a privileged bore at its heart.

Benjamin Braddock (Dustin Hoffman – actually nearly 30) is a fresh-faced young graduate, top of his class and a sports star. Arriving back home in California, he’s depressed, lost, uncertain about what he wants from life, but pretty sure it isn’t the litany of office, marriage and a career in “plastics” that his parents expect. His isolation brings him to the attention of Mrs Robinson (Anne Bancroft – only 6 years older than Hoffman), the wife of his father’s business partner. She sets about to seduce him, partly out of boredom, partly perhaps because she feels the same ennui and depression as he does (not that Benjamin ever notices – more on that later). They start a long summer affair, conducted with supreme awkwardness on Benjamin’s part, which suddenly becomes complex when he falls for her daughter Elaine (Katharine Ross). Can true love triumph?

The good first. The film’s popularity was grounded in its wit – and it has a very funny script by Buck Henry, who also appears in one of the film’s funniest sequences, as an overly helpful desk clerk at the hotel where Benjamin is awkwardly trying to book a room for his assignation. The film is pacey and energetic and full of imaginative cuts (a brilliant one sees Benjamin flopping out of a pool, jump cutting to him descending onto Mrs Robinson in bed) and directorial flourishes. It’s a dynamic and sexy young film, full of bounce and appeal, with some great jokes.

Mike Nichols – who won the film’s only Oscar for Best Director – shoots the film with real vibrancy. He does a fantastic job getting us to invest in Benjamin. A huge percentage of the film sees the camera focus in on Benjamin, usually in medium-shot or close-up – and it’s a rare moment when he isn’t in frame. The camera rarely leaves him for the first ten minutes, first zooming out from a close-up of him sitting on a plane, following him along a conveyor belt to the terminal (where his blankness slowly changes to fearful anticipation of what waits at home) to tracking along beside him at his welcome home party. This party is stuffed with his parents’ friends, and Ben’s isolation, claustrophobia and insecurity seem all the more striking as the camera gets closer and closer to him. It’s a superb example of using the camera to build empathy for the character.

Nichols’ excellent work continues throughout the film, which makes excellent use of shots, editing and zooms to make us experience Benjamin’s emotions, helping us root for him. It also helps that the film is scored to some of the finest music Simon and Garfunkel ever performed. The slightly sad, wistful feel to their songs – from Sound of Silence to Scarborough Fair – seems to perfectly frame Benjamin’s doubts, just as the slightly more hopeful beats of Mrs Robinson seem to capture him embracing freedom at the film’s end.

The decision to cast Hoffman pays off in spades. Hoffman is no one’s idea of a WASPy sports-star alpha male, but he’s everyone’s idea of an outsider. His performance is pitched perfectly – awkward, shy, uncertain, unaffected and natural. In fact, the film is pretty much perfectly cast. Anne Bancroft’s performance defined her whole career, the predatory Mrs Robinson whom she invests with touches of emotional vulnerability and more than a trace of the very same depression and fear that Benjamin is feeling. An entire generation effectively fell in love with the charming Katharine Ross.

Freedom is what the film is all about. But today, you feel the film skims only lightly on depths it could explore in detail. Benjamin can feel all the ennui he likes: he’s got it so made, I wish I had his problems. With his wealth, his fast car, the vast array of businessmen falling over themselves to offer him low-work-high-reward jobs, not to mention the gallery of attractive women throwing themselves at him, it’s the sort of misery only the rich enjoy. Almost constantly dressed in suit and tie, with his combed down hair, he looks a million miles from the generation that would party at Woodstock and protest Vietnam. Benjamin probably went on to vote for Reagan (twice). There is nothing counter-culture about him whatsoever. He ticks off noisy teenagers at a drive in and seems to find the young as hard to understand as the old. He’s less a generation adrift, more of an individual misfit.

The film though loves him to pieces, in the same way it largely treats Mrs Robinson as somewhere between a joke and a monster. She’s written as either a horny exploiter of youth, or a vengeful harpy. Rather than a ruthless cougar, today she seems to be more of a vulnerable, damaged figure. Every scene with Bancroft carries moments of pain, sadness and world-weary depression. Why else is she so able to spot these traits in Benjamin? Watch her desperation and hurt when Benjamin starts to date her daughter. That’s real humanity there, miles from the empty selfishness of Benjamin, who genuinely doesn’t get why she could take it so amiss that he intends to replace her with her own daughter.

The most striking moment in the film that captures this is the scene where Benjamin attempts small talk during one of their nights together. The film wants us to think Ben is looking for something real, and that Mrs Robinson just wants the sex. But the conversation is a masterclass from Anne Bancroft of suppressed pain and regret, as she talks of having to drop her art degree because she was seduced by her husband, of years of living an empty life. Benjamin of course doesn’t get it – he guesses she dropped the art because she wasn’t interested – and then gets cross when he feels he’s being belittled. Mrs Robinson’s sad eagerness to persuade him to stay is rather affecting – more than the film really allows. I credit Anne Bancroft with much of this.

And then we have Elaine. The second half of the film shifts gear dramatically from the first. While the first half is a sex comedy and study of suburban discontent, the second seems to change into the sort of celebration of youthful energy that the first half could be said to be partially satirising. Elaine is an independent young woman, embracing her education and the opportunities it offers. Suddenly, an energised Benjamin is tearing across country to win Elaine back (let’s put aside that Benjamin behaves in this section like something between a stalker and a creep).

However, as the film nears its conclusion, that celebration of the promise of youth is undercut somewhat, as Elaine chooses to make  all the same mistakes her mother made. The film even hints at this with its famous ending shot. After eloping from her wedding, Elaine and Ben sit on the back seat of the bus. The camera holds the shot as they laugh, until they stop laughing and then sit next to each other, and then awkwardly look this way and that as if waiting for someone to tell them what to do. What do they really have in common? Having made a spontaneous decision like this, what happens next? It’s another little genius flourish by Nichols – although it’s also the film having its cake and eating it, selling the sequence before this as a triumph of true-love, then asking us to question if the world is that simple.

Some of these ideas felt lost in the excitement of the film’s first release, when it captured a wave of public feeling. But the older the film gets, the more awkward it looks. As if the kids who watched it in the sixties and turned into the Reaganite Baby Boomers of the 1980s, slowly realised that the message it was selling was not quite true and perhaps their parents weren’t that different after all.

Watching The Graduate today, I found it hard to shake the feeling that if I flashed forward to the characters’ lives in 1997 I would find a very different, but still very similar story. Benjamin Braddock would be a wealthy businessman, still dressed in suit and tie, who went into plastics or computers or some such and swallowed the “greed is good” mantra from his corner-office. Elaine a depressed housewife, mother to a couple of kids, who left her dreams of forging her own life behind to marry the subject of a youthful fling. Who, with her own regrets, finally understands the sadness and misery at the core of her mother’s life. And is making eyes at that attractive young man next door…