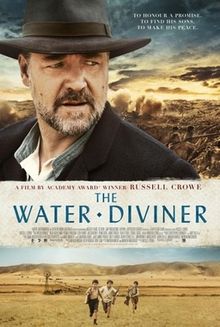 Russell Crowe’s directorial debut is a heartfelt, well-meaning, if rather traditional movie that explores the lasting impact of one of Australia’s deepest national scars, the Gallipoli campaign. Joshua Connor (Russell Crowe) is a water diviner who, in 1919, after the death of his wife, travels to Turkey wanting to bring home the remains of their three sons who all died on the campaign. He finds the country to be far more complex than the enemy nation he had expected, with the Turks themselves struggling with occupation. With the help of Lt Colonel Hodges (Jai Courtenay) and the Turkish Major Hasan (Yılmaz Erdoğan), Connor discovers two of his sons’ bodies – and hears rumours that his third son may in fact still be alive somewhere in Turkey. Meanwhile, a bond is forming between Connor and hotel owner Ayshe (Olga Kurylenko) and her son Orhan (Dylan Georgiades).

Crowe’s film in many ways tells a very traditional morality story: deep down, despite all the ways we’re different, we are all the same, and the biggest part of coming to terms with anything is taking the decision to move forward and put it behind you. The film bravely attempts to engage with this national trauma, that saw tens of thousands of ANZAC troops ruthlessly (and arguably pointlessly) sacrificed in an ill-planned Turkish campaign. Rather than just presenting the ANZACs as victims, it builds sympathy and empathy with the Turkish side and points out violence and crimes on both sides, from executing prisoners to equivalent casualty lists (including pointing out that the Turks were defending their home from invasion).

It brings this home by filtering this experience through one personal story. Connor is a man who has lost everything to this campaign, who has sacrificed his sons and has every reason to blame the Turks for his loss. But, bar one moment of provoked rage, his natural decency and quiet humility cause him to quickly see these former enemies as people as scarred by war as him. It’s a note the film repeats constantly. The characters we are intended to relate to – such as Connor and Lt Colonel Hodges – frequently treat the Turks with respect (which is returned), while more bitter figures are shown as blinkered and misguided.

Of course, the film can’t resist capturing this détente in a personal relationship, showing the growing intimacy between Connor and Turkish war widow Ayshe. It’s a gentle, but not at all surprising romance – a shame that there is such an age gap between Crowe and Kurylenko – but it does at times feel like a slightly on-the-nose personal reflection of growing understanding between Turks and Aussies.

It’s arguably unnecessary anyway, since a more engaging relationship develops between Connor and Yılmaz Erdoğan’s honourable and slightly world-weary Major Hasan. The very image of the worthy opponent, Hasan is practically human decency made flesh, a man who goes out of his way to help Connor’s quest and becomes the human face of a Turkish army that suffered as many losses as the ANZAC forces. The warmth between these two characters is really the emotional heart of the film, for all it tries to interest us in a will-they-won’t-they romantic relationship elsewhere.

The film is not without flaws. It’s been pointed out that it makes no reference to the Turks’ atrocious actions during the war towards Armenians and Greeks (indeed some dirty Greek vagabonds make an entry late on as final-act baddies). While this isn’t a film trying to tell that story, a single line of acknowledgement – even if it was dismissed by a Turkish character – would have gone a long way.  To speed up the search for his sons’ bodies, Connor is given some sort of loosely defined Shamanic power connected to his ability to find water (later he has vision in his dreams) – it’s a bit of magic that the film could do without. The film introduces several clumsy obstructive Brit officer characters (because nothing brings Aussie and Turk together like a loathing for arrogant Brits!), that serve as script-required roadblocks, either uninterested or fanatically intent on stopping Connor as the scene requires.

But fundamentally this is a very earnest and straightforward plea for understanding and forgiveness that doesn’t reinvent the wheel, but is a decent piece of storytelling. Crowe directs the thing with assurance (helped by some beautiful if slightly chocolate-box photography from Andrew Lesnie), contributing a low-key, reserved performance of quiet emotion. There are decent performances throughout: it’s great to see Jai Courtenay get a proper acting role, while Erdoğan is the stand out as Major Hasan. As a gentle Sunday afternoon would-be-epic it more or less fits the bill exactly.