Tension, drama and thrills… all go missing in these increasingly ponderous self-important sequels 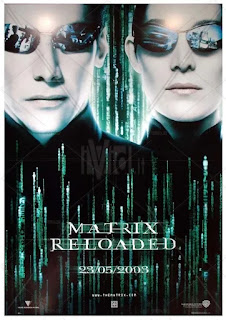 If you ever want to study a crash-course in how not to make sequels to a genre redefining film, these might be the perfect examples. I’m going to break a golden rule here and review them both together, which I’ve not done for anything else so far in this blog. The flaws in these films are so interlinked, I think you have to almost treat the whole misfire as one single, dreadfully disappointing film. And I just couldn’t bear the idea about writing two articles about each of them.

It’s six months after the events of The Matrix. Neo (Keanu Reeves) is an invulnerable phenomenon in the Matrix. He and Trinity (Carrie-Anne Moss) are in love. Morpheus (Laurence Fishburne) is being dragged over the coals by Starfleet Command (I know it isn’t called that, but it might as well be) for disobeying orders. And even worse news than that: the Machines have found the location of Zion, the secret last human city in the world. And they plan to destroy it – in 72 hours. Neo must undertake one final mission in the Matrix to find the secrets that will prevent this destruction of the human race – and he’ll have to do it with only the support of his friends, as the rest of mankind decides to batten down the hatches and wait for the uncoming storm. But is there more going on here than we think? Is there more to Neo’s existence than meets the eye? Why is he being plagued with dreams of Trinity’s death? And what is going on with Smith (Hugo Weaving) who know seems to be acting as rogue agent, working against man and machine? 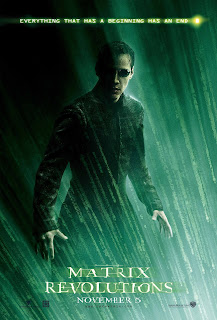 The answers are all eventually revealed, with maximum pomposity and self-importance, over the nearly five hours these sequels drone on, seemingly determined to drain out everything that anyone found cool about the original movie and leave it with a stuffy, pretentious, dull shell that won’t win any new converts over. Before these films, The Matrix was a franchise that would have a life in films, video games, anime and fan fiction for decades to come. After them, it was dead in the water.

Why? What did people like about the first film? They liked the action sure, and they liked the cool action and visuals and the anti-authoritarian nose thumbing. But those all really worked because we related to the characters, we saw that they were vulnerable, outmatched and in peril. In the real world they were plucky, brave resistance fighters. In the Matrix they were desperate rebels who could do really cool things. This all gets blown away here. In the Matrix, Neo is now so invulnerable, that fights are pointless: they are little more than dull displays of choreography with inevitable outcomes. Reloaded hammers home time and again Neo can do anything he likes in the Matrix. Fighting hundreds of clones of Smith at once? No problem. Flying faster than the speed of sound? Sure thing. Reworking the reality to suit him? It’s just a shrug of the shoulders.

This is a disaster to drama in two ways. Firstly, it drains all the peril out of any moment in the Matrix world because we know that there is no way Neo can get hurt – or that he will allow any of his friends to get hurt. Secondly, it means to get any tension Neo has to be somehow depowered or separated from everyone else. This happens three times over the films: Neo gets dispatched to China, flung into an underground station purgatory and blinded in the real world. When the film becomes reliant on continuously finding a way to put its hero out of the way (a blight that also often hits Superman on film), you know you are in trouble.

Where Neo is still vulnerable, is the real world where the films spend more and more time. Sadly, the real world is a tedious, uninvolving place. Remember in the first film where Morpheus seemed like a super cool, sage-like leader of a rebellion? Well in fact he’s just a cog in a large, stuffy command structure that takes all the worst, most uncool elements of Star Trek’s Starfleet and doubles down on it. Zion is a stereotypical sci-fi city, with characters dressed in flowing robes, quasi-uniforms or urban rags (that’s when they are dressed at all – Reloaded’s early doors rave/orgy rightly draw oceans of sniggers). The real human world isn’t a gang of plucky, anti-authoritarian types but a typical sci-fi, rules-bound society. The flair of our characters is stripped from them.

All this is wrapped in a package that doubles down on the stuffy, Bluffer’s Guide to Philosophy that popped up in the first film. There it added a bit of self-regarding intellectual heft to a film about people kicking each other and dodging bullets, here it’s the be-all-and-end-all. But the films are nowhere near as clever as they think they are: various characters parrot crudely scripted stances on everything from free will to determinism to the greater good. None of it is new or intriguing, and nearly all of it feels like the directors straining to show off their reading list.

It hits its apotheosis in Reloaded as the Architect (Helmut Bakaitis), the bearded brain behind the Matrix, lays out in a long speech how Neo is in fact a part of the Matrix programme designed to help the system reboot and refresh in cycles, an interesting idea totally crushed under the weight of needlessly long, incomprehensible words, phrases and Latin quotes that don’t sound smart, only like the speech was written out in plain English and then run through a thesaurus.

And it was a neat idea that our Messiah might actually have been created by the machines to help their prison renew itself. But it gets lost in the clumsy, pleased with itself delivery, in conversations about choice and free will (will Neo choose his destiny or saving Trinity’s life? Guess!) and the generally turgid plotting. This gets worse in Revolutions which finally seeps the life out of the franchise, with a video-game shoot-out at Zion (which makes no tactical sense), a trek by Neo and Trinity to commune with the machines and Agent Smith converting every human being in the Matrix into a copy of himself, in a vague philosophical comment on the death of individuality.

The worst thing about these films is that they are self-important, hard to enjoy and often more than a little silly. Fights take place at great length with very little tension. Reloaded does have a fab freeway car chase – but again it depends on Neo being absent for any tension to exist (and as soon as he turns up it’s all solved in seconds). Almost everything in the real world is stuffy, earnest and bogged down in the sort of uncool sci-fi tropes the first film stayed away from. Nearly anything in the Matrix involves watching a God like figure hitting things (including a bizarre ten-pin bowling effect when Neo knocks over a host of Smiths).

The actors struggle to keep up the genre-redefining cool that made the first film so popular. Fishburne looks bored (and rightly so, since his dialogue is awful and he’s given almost nothing to do in Revolutions) and Weaving treats the whole thing as a joke. Reeves is earnest, but frequently restrained by the dullness of his role as an almighty God. Moss has most of the best material as Trinity makes drastic decisions for love and faith. The rest of the cast struggle with either paper-thin characters, painfully over-written dialogue or a mixture of both.

The Matrix sequels managed to drain out everything that was great about the original. Where that was nimble, these were stuffy. Where these were anti-authoritarian, these laid out a dull and stereotypical sci-fi society. Where the first was gripping, desperate and adrenalin fuelled, this sees invulnerable heroes, extended runtimes and a frequent lack of peril. Worst of all Revolutions in particular feels like hundreds of other “sci-fi war films” and about a million miles from the actual revolution of the first film. It doubles down on nearly everything that was less good in the original and strips out the things that most impacted people. How not to make a sequel.