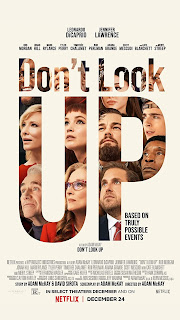 Climate Change. It’s the impending disaster where we stick our head in the sand and pretend it’s not incoming. Governments have been told for decades our carefree use of fossil fuels and slicing down of rainforests will have a cataclysmic impact. But it’s always easiest for governments and people to just say “nah” and not let those thoughts get in the way of our everyday lives. Adam McKay’s satire Don’t Look Now takes these trends of indifference, disbelief and denial climate scientists have faced their whole careers and reapplies them to a comet-hits-the-Earth disaster movie.

So, when Michigan State University astronomers Dr Randall Mindy (Leonardo DiCaprio) and Kate Diabiasky (Jennifer Lawrence) spot a hunk of ruck the size of Everest on a collision course with the Earth they are met with a chorus of… yawns, memes and flat-out denials. The Trumpian President (Meryl Streep) is only interested in her donors, the mid-terms and dodging the fall-out from a host of scandals. The media – represented by Fox News style anchors Brie Evantree (Cate Blanchett) and Jack Bremmer (Tyler Perry) – aren’t interested in a story they can’t process down into a feel-good social media meme. And even when people start to listen, plans to destroy the comet are benched in favour of a wildly risky scheme, dreamed up by Steve Jobs/Elon Musk style tech billionaire Peter Isherwell (Mark Rylance) to mine the rare ores it contains for money. What could go wrong?

I can see what Adam McKay is aiming for here, to create a sort of Dr Strangelove for climate change, where the great and the good we are counting on to get us through a crisis, turn out to be the blinkered morons who end up causing it. There are moments where it sort-of hits on a rich mixture of farce and genuine anger. Moments where first Kate then Mindy – thelatter with lashings of Howard Beale – melt down on National TV, apoplectic at the comet-denying indifference of millions of people stand out as both hilarious and also compelling.

But, like a lot of McKay’s would-be satirical attacks over the last year, on finance and politics, the message sometimes fails to land because of the heavy-handed, self-satisfied, smug tone of the delivery. Don’t Look Up frequently isn’t very funny – and yes I know it ends with the world being destroyed due to everyone’s indifference and incompetence – and it ladles most of the blame on obvious targets. It’s takedown of Trump – here represented by Meryl Streep – is basic, it hits open goals with the agenda-driven bias of American news reporters and takes pot-shots at messianic tech billionaires. A real punch would perhaps have focused in more on how all the mindless, unfocused greed and ambition of these people is fed by the bland, social media focused, sound-bite obsessed shallowness of the masses. But Don’t Look Up remains focused on the big people.

So focused in fact that, even in this satire, only America has the wherewithal to launch a mission against the comet. A joint Russian, Chinese and Indian mission fails to get off the ground and other world leaders are noticeable by their absence. We never really spend time with any normal people. While much of the blame does lie with governments not taking a lead, we do live in a world where normal people are radicalised by reading about nonsensical mush like QAnon through chat rooms. Imagine a satire that looked at how ordinary people can be made to believe wild theories rather than the evidence of their own eyes as a comet heads towards Earth? Instead Don’t Look Up wants to stick with something vaguely comforting – that there are big, selfish, elites running us who act out of greed and stupidity and they carry all the danger (and the blame).

Where the film is strongest is the doubt and nonsense thrown at scientists. Mindy and Diabasky are first ignored by the administration because they aren’t Ivy League. Attempting to leak their findings on the TV, they are overshadowed by an on-air-proposal of a celebrity DJ to his singer girlfriend and when they hit the news, the only takeaway is that Mindy is ‘cute’, while Diabasky is a freaky angry woman, ranting about the world ending (she’s a meme in minutes). At every point the science is questioned or put on the same level as gut feelings and political agendas. Even their campaign to encourage the world to “Just Look Up” to see the impending catastrophe is countered by the President’s “Don’t Look Up” campaign that persuades millions of people the comet isn’t real.

Really rule by social media and the dumbing down of humanity should be the main target here. A comet isn’t even a great metaphor for climate change – which is gradual, can’t be just blown up and needs to be prevented by society making changes to the way we live. In some ways, by replacing climate change with a comet, even the film is acknowledging its not sexy or exciting enough – and that it doesn’t want to turn its critical fire on millions of people who would rather turn the heating up or drive to the corner shop rather than push to make changes in their lives. 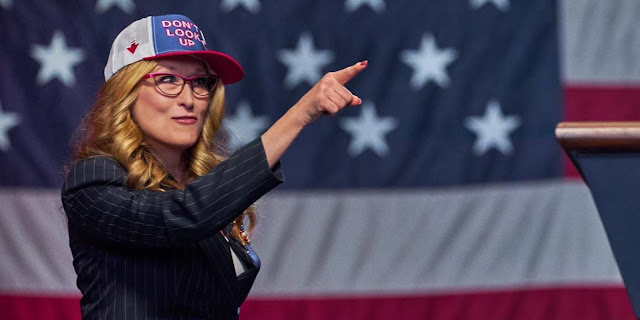 So, it’s easier and simple for McKay to create a cartoon freak show of easy targets and bash them rather than tackle the underlying causes of climate change – that our world and its population wants to have its cake and eat it, and governments for generations have been too focused on the here and now to ever worry about the years to come. So funny as it can be to see Streep Trump it up, or Rylance channel his softness into insanity, or Hill play another of his mindless frat boys turned power brokers, the film doesn’t feel like it really goes for the real causes of climate change: our own culture. It takes hits at our social media simpleness, but not at our short sightedness.

McKay does at least direct without much of the fourth-wall leaning flashiness of his earlier works, and there are committed – if not exactly stretching – performances from Lawrence (whose characters checks out in despair at the shallowness) and DiCaprio (who is seduced by fame, power and Blanchett into becoming an apologetic mouthpiece for the administration). But Don’t Look Up is a little too pleased with itself, a little too focused on easy targets and doesn’t do enough to spread the blame wider. It stills see many of us as victims or mislead – when really we are as to blame a everyone else.