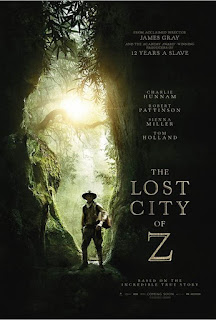 For as long as parts of a map so unknown, that all we write on them is “Here Be Dragons”, there have been explorers yearning to uncover their secrets. Exploring in the nineteenth and early twentieth century was a dangerous, sometimes fatal, call, as explored with a near-mystical thoughtfulness in James Gray’s ambitious film The Lost City of Z. Percy Fawcett (Charlie Hunnam) was the courageous soldier, whose whole life was a campaign to prove he had nothing in common with his disgraced father. Fawcett became obsessed with discovering the secrets of the Amazon, principally the existence of a lost civilisation built by the indigenous people of Brazil, which he called The Lost City of Z. It was to become a quest that would dominate his life.

Based on a true story, Gray’s film taps deeply into a Herzog-by-way-of-Lean view of the Jungles of South America, a place of great awe and danger which creeps inside the soul of Fawcett until, as one tribesperson says, he seems to be of both the West and the Jungle. Shot on location, the Jungle becomes a place of great beauty, but also unknowable mystery and menace. As Fawcett and his companions hack their way through it, on what could be a fool’s errand, their growing respect for it and the indigenous people, is matched only by their increased awareness of its dangers.

The Golden Age of Exploration is a difficult subject to tackle today, with many seeing (in some cases correctly) it as underpinned by a Westernised Imperialism, that earnestly believed the best thing that could happen to these lands (and the ‘savages’ who populated them) was that they should gratefully concede their land and culture to Western ‘civilisation’. Gray’s film is careful to show that Fawcett acknowledged he didn’t always understand the world he was in and learned some hard lessons. But the key difference is that acknowledgment and, as presented here, the humility and respect he recognised the rights and skills of the indigenous people. It marks him out from several of his contemporaries who see them only as contemptable savages and simpletons.

Indeed, Gray’s film positions Fawcett as an admirable egalitarian. His belief that the people of Brazil were not only capable of building in the Jungle, but that they could create an advanced society of pottery and irrigation ahead of those in the West is laughed out of court by many of his fellow members of the Royal Geographical Society (as we see in an involving debate sequence). While staying with a tribe in the Amazon, he marvels at their ability to cultivate and farm the land – something he had been assured was impossible. Encountering a tribe whose custom is to eat parts of their dead (so as to preserve their spirit in themselves), he reacts not with kneejerk disgust but understanding and respect.

The respect he shows for the environment and those he finds there is contrasted with the reaction of famed explorer James Murray, who joins him for his second expedition. Played with a puffed-up self-satisfaction and rigid believe in his own righteousness by Angus MacFadyen, Murray (a noted polar explorer) proves a serious handicap on the expedition. Unfit, unprepared for the tropical environment and treating all he encounters with hauteur, Murray slowly alienates the rest of the party by displaying the imperialist confidence Fawcett and his companions avoid. Stealing supplies, nearly overtipping a raft and ruining some of their stores, Gray uses Murray as the picture of the arrogant classic explorer and a great contrast with Fawcett, who swears thereafter to never again judge a man on his standing and reputation rather than on his character.

Gray’s film has rather a good ear for the pressures and hypocrisies of post-Edwardian Britain. The film opens with Fawcett successfully shooting a leading stag during a state visit by Archduke Franz Ferdinand. It’s a feat that wins him praise – but not any form of meeting with the Archduke since Fawcett is, as a Lord puts it, “unwise in his choice of ancestors”. It’s a stigma Fawcett has to deal with at almost every turn, from being pooh-poohed for his advocation of the Amazonian tribes to dealing with the criticism of the entitled establishment figures.

Gray marshals this all rather effectively, bringing the film into a neat balance of acknowledging modern issues with exploration while still giving an excellent idea of why motivated these men. It all plays out within a dream like aesthetic that leaves a haunting impression. During his first expedition, Fawcett emerges from the bushes into a make-shift opera house built in the jungle (how Fitzcarraldo is that?), on a plantation ruled by a Portuguese landowner dripping with the greed of his class (Franco Nero in a delicious cameo). During his time at home – and at the front during the First World War – elements of the jungle creep into frame, reflecting Fawcett’s longing to return to this mysterious exotic land which makes him feel alive in ways the stifling life at home never does.

Gray’s sense of atmosphere is so well done in the film – its mesmeric shots and sense of unreality will linger – that it’s a shame Charlie Hunnam isn’t quite the right actor to play the role (he took over from Benedict Cumberbatch, who would have been perfect for the obsession, decisiveness and desire to prove himself). Hunnam gives a solid performance, and he really understands the egalitarian humanity of Fawcett, who treats all men and women as equals. But there is a deeper unknowability and mystical longing in Fawcett that is beyond his grasp.

Interestingly, Robert Pattinson – here grimy, eccentric and almost unrecognisable as Fawcett’s best friend Henry Costin – would have been a better call. This is an intensity and soulfulness in Pattison that Hunnam can’t quite bring to Fawcett. Tom Holland gives a heartfelt performance as Fawcett’s hero-worshipping son and Sienna Miller a sensitive and intelligent one as his devoted wife. Clive Francis and Ian McDiarmid play with aplomb sympathetic senior RGS men.

There are many more virtues than faults in The Lost City of Z. The photography by Darius Khondji is wonderful – no one has filmed the jungle better since The Mission. Gray’s intelligent and thoughtful film addresses questions of colonialism and prejudice, while also not shying away from the danger and aggression of some of these tribes. The portrayal of Fawcett’s final expedition is wonderfully done, culminating literally in a dream like sequence where reality, hope and fate merge. It’s a fascinating film.