A nun struggles to balance faith and duty in this handsomely made, beautifully paced drama 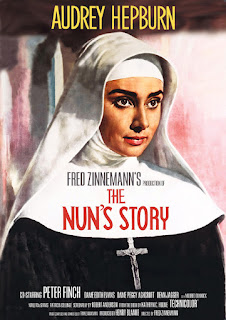 Gabrille van der Mal (Audrey Hepburn) has two passions in her life: her faith and a desire to heal the sick. Dreaming of combining these and working with native patients suffering from tropical diseases in the Belgian Congo, at 19 she joins an order of nuns who specialise in nursing. But the life of nun is far from an easy one, and Sister Luke (as she becomes) constantly struggles to square the circle of her faith, passion for medicine, ambitions and her natural antipathy towards authority. It’s a square she struggles with for almost twenty years, culminating in a crisis of faith during the German occupation of Belgium during World War II.

Zinnemann’s gracefully directed film, not surprisingly won the warm support of the Production Code Office, with its faithful depiction of the life and work of Nuns ticking all the boxes of a devout picture. However, The Nun’s Story is a more complex and intriguing film than this. While it finds much to praise in the self-sacrifice and devotion of the nun’s life, it isn’t afraid to look at how this institution (like many others) values obedience over innovation and praises submission over individualism. It stresses, in a way very few other films have done, how strikingly difficult it must be to lead your life in a religious devotion, and how much such orders (by their nature) demand we must put aside our natural inclinations.

Sister Luke is warned from the start by her doctor father (a genial Dean Jagger) that, with her stubbornness and independence, she is likely to find strictures on obedience hard to follow. He’s right. Superbly played by Audrey Hepburn (in her personal favourite performance), Sister Luke constantly finds it a near impossible struggle to submit herself to the authority of the order. Hepburn makes clear Sister Luke’s sincere faith, and her desire to belong, but also her unwillingness to accept that this might involve any compromise on her work as a nurse.

From the first she demonstrates she is unwilling to stop tending to a patient when the bell rings for her to attend prayer. She constantly reproofs herself for her inability to subjugate her personality to the requirements of her religious order. Training in tropical diseases at her medical college, she refuses a request from Mother Marcella to deliberately flunk an exam to prove her humility. As a ‘reward’, the best qualified nun in tropical diseases is dispatched to a sanatorium in Belgium to further learn obedience. Even when she is eventually allowed to work in the Congo it’s only in the “White’s Only” hospital (as they need the staff) and she is reproved for showing off when she makes much needed improvements to the hospitals working practices.

In many ways the film is a fascinating look at how hard it was for a woman to make a mark in the early 20th century. Clearly Sister Luke should have trained as a doctor – she graduates fourth in her class in tropical medicines – but that door was closed to her, and her only chance of working in Africa was as a member of a religious order. She ends up working in a system where she must constantly make difficult calls between her two passions (faith and medicine) – with her order placing devotion and obedience as the primary goal.

Not that the film is disparaging of religion. The devotion and goodness of the nuns is above question. Their ability to turn the other cheek and forgive is shown as an unparalleled virtue – even a shocking crime in the Congo is patiently forgiven. Many senior nuns are more than capable of balancing Sister Luke’s devotion to medicine with the orders demands. Mother Christophe (wonderfully and warmly played by Beatrice Straight) at the sanatorium, disagrees with the exam choice forced on Sister Luke and supports her to find a balance between her work and her order’s demand for obedience. Mother Mathilde (a matronly Peggy Ashcroft) in the Congo encourages her improvements – with the proviso she is told first. Others – such as Reverend Mother Emmanuel (a gently reserved Edith Evans) – consider it more important that Sister Luke dilutes her individualism in the order.

It makes for a fascinating film, that praises the devotion and self-sacrifice of religious orders, while not shying away from how rigid they often (by their very nature) are. Sister Luke in many ways is an ill-fit for being a nun. She can’t, or won’t, put her own beliefs about what is right second and she has an obstinance and pride (which she admits herself) that should really have ruled her out from the order in the first place. While the film doesn’t quite do enough to give as much space to her faith as it does her passion for medicine, it also makes it clear many characters – most astutely Peter Finch’s coolly professional Congo-based atheist doctor – recognise that she isn’t able to make the ultimate sacrifice that being a nun requires: the full submission of her own will.

Zinnemann directs this with a graceful, careful pace that finds many moments of quiet emotion amongst the imposing world of the order. The film is bookended by beautifully done sequences of departure and arrival, with possessions carefully left-behind and doors opening onto new and radically different worlds (the ending in particular plays out in a powerful silence). The film is beautifully shot by Franz Planer, with a wonderfully restrained score by Franz Waxman. It’s perfect material for this director, who was always strongest when showing the individual struggling within a system that demands they turn against their own nature.

The Nun’s Story is perhaps a little overlong and at times takes it stately pace a little too slowly. But it has a wonderful performance by Audrey Hepburn (who is in nearly every single frame), gorgeous location shooting and is directed with restraint and intelligence by Zinnemann. It also manages the difficult duty of finding things to both praise and criticise in the life of a religious order and both respects and questions the lifestyle and its rules. A middle brow film no doubt, but a fine example of highly skilled and professional Hollywood film-making.