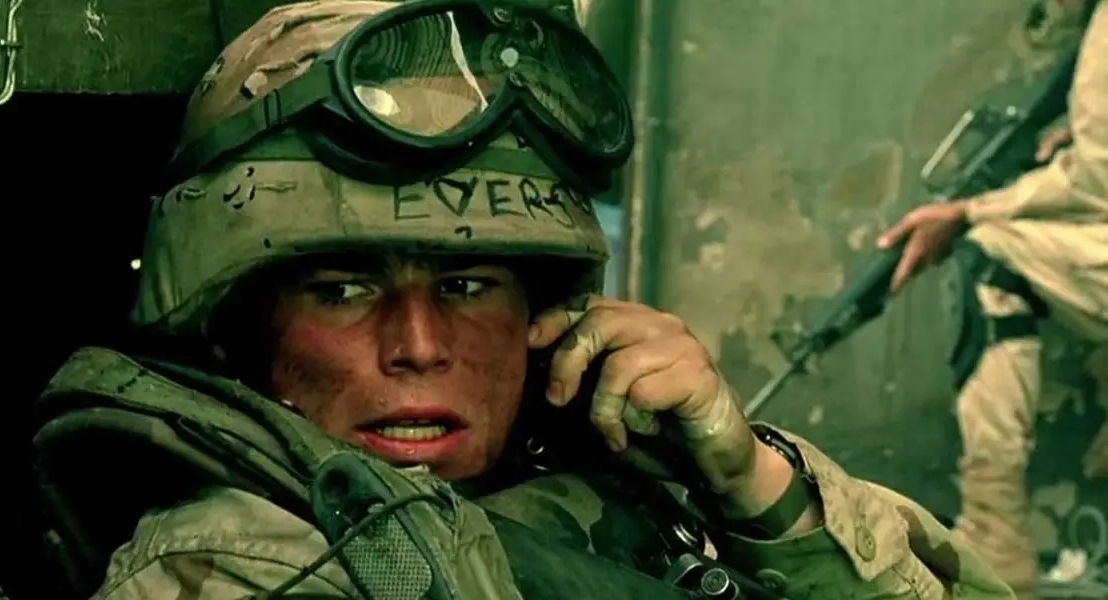 On 4 October 1993, the US won a pyrrhic victory supporting UN efforts to prevent genocide in the Somalian Civil War. A mission in Mogadishu to capture the lieutenants of rebel leader Mohamed Farrah Aidid collapsed into a desperate overnight street battle as Aidid’s forces rose up en masse (up to 4,000 of them) in an attempt to cut off and wipe out the c. 160 US troops.

Although the majority escaped, it was one of the most costly American operations since Vietnam, with the loss of 18 dead and 73 wounded and two Black Hawk helicopters shot down. As many as 2,000 Somalians were also killed. Pictures of the bodies of American soldiers dragged through the streets by Somalian rebels led to a major realignment of US foreign policy, with a reluctance to join future peace keeping operations (most notably the Rwandan genocide).

This is bought to the screen in a virtuoso directorial achievement by Ridley Scott, one of the most immersive and gripping war films ever made. Black Hawk Down doesn’t shirk on an inch of the war experience. Combat is loud, sudden, all-consuming and a barrage on the senses. It’s scary, confusing and always unforgiving. Mud, blood and dirt are flung into a camera that runs through streets alongside the soldiers, embedded with them under siege. The slightest lack of focus or mistake is punished by horrific injury or death. The battle is a nightmare of confusion and desperate improvisation in which neither side (especially the Americans) really knows what’s going on.

It’s not surprising they don’t. The film expertly demonstrates how a multi-approach plan (helicopters delivering ground forces, an armed convoy to collect prisoners) was effectively a rashly planned house of cards, which collapsed when the hornet’s nest of an uncontrolled city, crammed with thousands of potential hostiles, roadblocks and a prepared and dedicated enemy (willing to suffer a level of loss the Americans were not) was unleashed. Ground forces are stranded, helicopters shot down, the exposed convoy becomes a slow-moving hospital, all under constant fire in a dusty, urban centre where every single civilian could be a enemy combatant.

Scott shoots and edits this with pulse-pounding intensity, aided by the dizzying camera work of Sławomir Idziak and the high-octane cutting of Pietro Scalia, whose work grips you by the throat and never lets go. It’s a “grunt’s-eye” view of the war, that puts the viewer very much in the trenches with the soldiers. We pretty much join them running through gauntlets of bullets, ducking into foxholes and desperately trying to stay alive. Scott’s work is outstanding here, a brilliant depiction of the chaos of battle in which events are both intimidatingly out of control but also crystal clear to the audience, assembled with a never-lets-up energy leaving the viewer tense and breathless.

As Eric Bana’s fiercely professional Hoot says “it’s about the man next to you”. That’s very much what Black Hawk Down is about. There’s very little context about the American operation in Somalia, the Somalian people, the impact on long-term American politics…  The film believes the whys and wherefores are less important than protecting the lives of your colleagues.

Argument has raged about whether Black Hawk Down is pro-war or not. I’m not convinced it is. Can a film which shows soldiers maimed, disfigured and literally torn in two, really be a celebration of war? But, what it clearly is, is pro-the American fighting man. The training and expertise of these soldiers – trained to make every shot count and keep their cool in terrifying situations – is crucial to their survival. (The scattergun indiscipline of the Somalian rebels is noticeable by comparison – and it’s fair to note that Black Hawk Down gives very little focus to the Somalians at all, other than as a faceless hostile mass).

The film is in awe of the soldiers’ willingness to sacrifice themselves for each other: the dramatization of Gary Gordon and Randy Shughart’s request to be dropped in to provide some sort of cover to one of the downed Black Hawk pilots (a request they know is a suicide mission) exemplifies “leave no man behind” bravery. Black Hawk Down is a tribute to soldiers.

Interestingly though, that also means it’s a film where characters are more important for what they do rather than who they are. We learn very little personal information about any of them. Hartnett’s newly-promoted SSG has sympathy for the Somali people and is nervous about his first command mission. McGregor’s admin officer is unsettled by his first field operation. Sizemore and Isaacs are professional officers, executing orders to the best of their ability; Fichtner and Bana experienced Rangers, samurai trained to adapt and improvise. But their personalities are only hooks to hang their deeds on. Each melts into the large cast as needed. Black Hawk Down is the triumph of the unit – be that fighting together or some member volunteering to die to help protect others.

It is fair to argue the film should have done more to contextualise events. Black Hawk Down focuses so much on celebrating the bravery of soldiers, it skips any political impact: it’s not made clear in the end captions that the US effectively withdrew from its peace-keeping responsibilities for years afterwards (only shocked back into it by 9/11). It never mentions the UN were slow to respond as they had been caught in an almost identical disaster a few weeks before (a lesson the US didn’t bother to learn from). It never mentions the cost of non-intervention in places like Rwanda. It never explores how these events – and American complacency, not least in the committed-but-unengaged soldiers – were a step toward a terrorist world that would culminate in 9/11.

Scott was aiming to make an immersive film. Perhaps his work on films like Body of Lies (and even Kingdom of Heaven) later was about adding more shading and depth to his presentation of world affairs (and critique of American policy). But, in its intent, Black Hawk Down is a triumph, one of the most unrelenting and compelling combat films ever made. You can argue it turns the Somalis into bogey men fighters – but it’s trying (rightly or wrongly) to be a representation of a single military action, from a single side’s perspective. And there is no doubt this is one of Scott’s finest achievements – and one of the great war films.