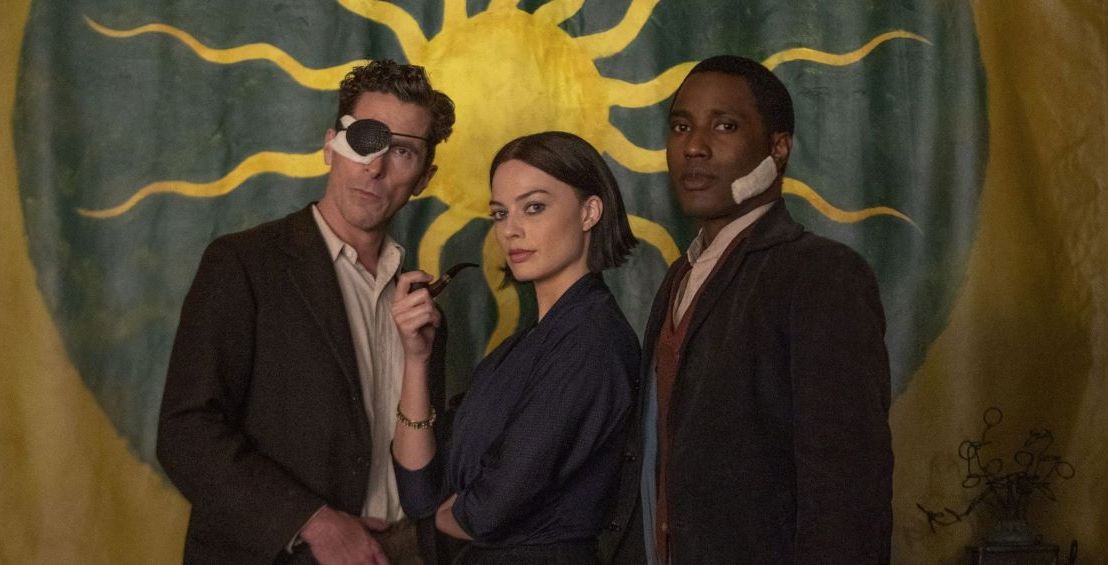 Lots of quirk, whimsy and smugness, not a lot of interest or dynamism in this satirical mis-fire

David O Russell’s has made a niche for himself with his ensemble awards-bait films, filled with touches of quirk and offering rich opportunities for eccentric, showy performances from actors. Some of these have walked a fine line between charm and smugness: Amsterdam tips too far over that line. Like American Hustle it’s a twist on a real-life event (opening with a pleased with itself “A lot of this really happened” caption) but, unlike that film, it fails to insert any compelling storyline, settling for a whimsical shaggy-dog story that frequently grinds to a halt for infodumps or lectures.

Set in 1933, just as Roosevelt has taken office, it follows three friends who formed a friendship for life in post-war Amsterdam. They are: wounded veterans doctor Burt Berendsen (Christian Bale) and lawyer Harold Woodsman (John David Washington) and socialite-artist-turned-nurse Valerie Voze (Margot Robbie). Berendsen and Woodsman lost touch with Valerie in the 1920s, but now they are all bought together after the murder of their respected former commander as part of a plot from various nefarious types to overthrow the government in a fascist-inspired coup.

Sounds gripping right? Well, Amsterdam fails to find any urgency in this. In fact, details of this plot and the political context it’s happening in are sprinkled around the film as if Russell kept forgetting what the film was supposed to be about. It’s almost as if he stumbled on an unknown piece of American history – a rumoured coup attempt, thwarted by being denounced by the ex-Marine General approached to lead it (here represented by De Niro’s ramrod straight General Dillenbeck) – but got more and more bored with it the longer he spent on it.

Instead, his real interest is in the faint overtones of Jules et Jim style thruple between Berendsen, Woodsman and Voze (though this is American not French, so any trace of homoeroticism is dispatched, despite the obvious bond between the two men). The most engaging part of the film is the Act two flashback to these three healing, dancing and bonding in post-war Amsterdam, in a “our troubles are behind us” bliss. Even if it’s self-satisfied in its bohemianism.

To be honest, even then, they have an air of smugness behind them. They pass the time singing improvised nonsense songs based on words pulled out of a hat and playfully posing in Valerie’s modernist artwork. Valerie is played with almost enough charm by Robbie for you to overlook she is a standard Manic Pixie Dreamgirl, the sort of babe who pulls shrapnel from bodies to turn it into artistic tea-sets as a commentary on the madness of war. She and Woodsman form a relationship (with the married Berendsen as a sort of – well I’m not sure what, but definitely not a sexual third wheel) and these blissful Amsterdam days are the times of their life. Russell is so keen for us to know it, that all three pop up in short cutaways at key moments to whisper “Amsterdam” direct to the camera, an affectation that fails to deliver the spiritual impact its straining for.

It’s better than the shaggy dog story around the conspiracy that fills the 1930s part of the storyline. This remains so poorly defined, that Bale has to narrate a concluding slideshow of clips and fake newsreel and newspaper coverage to explain what on earth has just happened. The lack of clarity about the stakes – and the general lack of seriousness or urgency anyone treats them with –fails to provide any narrative oomph. Instead, it drifts along from casual meeting to casual meeting, every scene populated with a big-name actor showboating.

There is a lot of showboating in this film. Bale, an actor with an increasingly worrying tendency for funny voices and tics, fully embraces the facially scarred, glass-eye wearing Berendsen, perpetually stooped with a war wound and prone to fainting from pain-killer overuse. It’s a showy, actorly performance with a licence to go OTT. Bale does manage to invest it with an emotional depth and vulnerability, but there’s more than an air of indulgence here.

Most of the rest follow his lead. Malek and Taylor-Joy sink their teeth into a snobby socialite married couple. Rock essentially turns his role as a veteran into a less sweary extension of his stand-up act. Myers and Shannon seize with relish roles as ornithologist spies (is this meant to be a joke about the origins of the James Bond name from the author of a bird-spotting guidebook?) Poor John David Washington ends up feeling flat with his decision to underplay (like he’s in a different movie) and only De Niro really manages to feel like anything other than an actor on holiday.

Russell wants to make a point about the continual corruption of the rich and how their hunger for more power will never be sated. There are some half-hearted attempts at attacking racism, with the ill treatment of black veterans, but it lacks bite or edge. His attempts to draw parallels with Trump are all too clear, but the film largely fails to integrate these ideas into the film. In fact, it ends up relying on voiceover lectures from Bale about dangers to democracy. It ends up like being hectored by an angry socialist after a student revue night.

The film is shot with a series of low angle shots and medium and close ups that eventually made me feel like I was watching it from the bottom of a well. A vague sepia-ish tone is given by Emmanuel Lubezki, but the film looks flat and visually uninteresting (so much so I was stunned to see $80million had somehow been blown on it, despite most of the cast working for scale). It drifts towards a conclusion, without giving us anything human to invest in (as Russell managed so well in Silver Linings Playbook or The Fighter) or providing the sort of caper enjoyment he delivered in American Hustle. Instead, it’s oscillates between smug and dull.