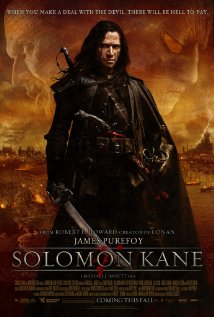 Solomon Kane was a pulp-magazine character from the 1920s. I’d never heard of him before – I imagine many others haven’t either – so bringing a film about him to the screen was always going to be a labour of love. That’s certainly what this film is.

In 1600, Solomon Kane (James Purefoy) is a ruthless mercenary, but is confronted by a demon who tells him his soul is forfeit to the Devil. Horrified, Kane flees to sanctuary in a monastery, forsaking violence and devoting himself to God. After being expelled because the abbot has a dream, he encounters a Puritan family, the Crowthorns, and travels with them. Kane is deeply drawn to the Crowthorns – and when they are ambushed, the family killed, and daughter Meredith (Rachael Hurd-Wood) kidnapped by the servants of the sorcerer Malachi (Jason Flemyng), Kane swears to revenge the Crowthorns and rescue Meredith.

There’s something quite sweet and charming about Solomon Kane. It’s an old fashioned B-movie with a winning style. Is it going to rock any worlds? Probably not, but it’s got plenty of swagger and it makes a small budget go a long way. Bassett’s influences are pretty clear – everything from Witchfinder General to Lord of the Rings – but he shoots the film with a commendable energy. The visual flair is impressive, and successfully creates the feel of an England halfway between civilisation and the middle ages. Bassett also knows how to shoot an action scene, and the film is stuffed with fantastic sword fights that hit the right balance between brutality and dynamism.

Bassett also finds a fair amount of emotional heft in the story. The decision to focus a large chunk of the opening 45 minutes on Kane’s guilt and his attempts to make amends, make him a character we end up caring about. The “good family that wins our hero’s heart” cliché is exactly that, but it works very well here as Bassett takes his time and lets Kane’s bond with the Crowthorn family grow organically. All this patient establishment of Kane’s personality really pays off during the action of the second half.

It’s also helped a great deal by James Purefoy’s committed performance in the lead role. Purefoy has long since been a favourite of mine, who never really got the breaks to become a bigger star. His performance has the physicality and charisma, but Purefoy also adds in a Shakespearean depth to create a man desperate for redemption, carrying a pained heart very close to the surface. He dominates the whole film, setting the tone; and I suspect his dedicated performance encouraged fine work from the actors around him, despite almost all the other roles being little more than cameos. There are blockbusters whose leading actors are incapable of holding the screen as well as Purefoy does here.

Bassett’s B-movie spectacle is not perfect. The eventual explanation of why the Devil wants Kane’s soul is inexcusably garbled. Jason Flemyng is miscast as the demonic sorcerer Malachi, and his final confrontation with Kane lacks real impact (largely because Malachi has so little presence throughout the film) and devolves into a face-off with a dull special effects monster that looks rather like Megatron in the live-action Transformers films. There is a smaller-scale, personal ending in this film, but it gets crushed under the foot of the special effects. It’s a shame that a large portion of this film’s budget probably went on this.

Solomon Kane is structured, and plays, like a B-movie – but it’s proud of that. Its low budget demanded inventiveness and dedication from the cast and crew, all of whom delivered. The grimy design of the world is perfect, the story creates a good combination of action and emotion. Its story may be pretty clichéd, but it’s presented with great gusto – and has a terrific leading performance from a heavily under-rated actor in James Purefoy. More people deserve to see this – if this isn’t a cult classic in the making, I’m not sure what is.