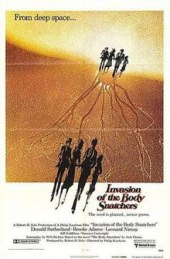 Sometimes, as we look around our office-based world, it’s hard not feel that most of it is taking place on a weary treadmill. That we are going through the motions with no engagement or feeling, that we are all cogs in the same machine. Invasion of the Body Snatchers, like all great science fiction films, taps into this sense of individuality being lost in our modern age, and mixes it with a brilliant dose of Cold-War paranoia. Like much brilliant science-fiction, it offers a window on our world that makes us pause and reflect on our own lives.

Matthew Bennell (Donald Sutherland) is a health inspector (has there been a less sexy job for a hero?) in San Francisco. One day his colleague Elizabeth Driscoll (Brooke Adams) confesses to him that her boyfriend, dentist Geoffrey (Art Hindle), has changed so much that he feels like a completely different person. Turns out she’s not alone in the city – many people are reporting their loved ones have become distant and changed. While Matthew’s friend, celebrity psychiatrist Dr David Kibney (Leonard Nimoy), laughs off their concerns, Jack (Jeff Goldblum) and Nancy (Veronica Cartwright) Bellicec are keen to listen – especially when they find a copy of Jack growing in their home. Can the people of San Francisco really be being replaced by copies in an alien invasion?

Invasion of the Body Snatchers is not just a great remake, it’s a great piece of film-making in its own right. It takes the ideas of the original and ramps them up into a Nixon-era paranoia fest, to create a creepy and unsettling film. It’s a film that perfectly understands the one thing all people value, perhaps more than any other, is their individuality and ability to feel and experience emotions. These are the two things the Pods take from you – in all other respects, the people are unchanged, they’re just unfeeling drones.

What Philip Kaufman does really well is fill the film from the start with unsettling moments, and hints that things are wrong. The film opens with eerie visuals as the Pods arrive from space and slowly infect the vegetation of the planet. Unusual camera angles and lingering shots pick out people in the frame, behaving suspiciously robotically. Robert Duvall has a wordless (uncredited) cameo as a priest on a creaking swing in a playground – the sound and visuals both insanely unnerving, especially considering Duvall’s wordless intense stare.

Pod people go about their work of taking over the earth with a relentless, eerie silence. Do they cling to silence so much, so that their piercing screams when they detect a rogue human can be heard? Late in the film, we see several instances of Pod people, freeze, point rigidly at an unconverted human, and then let out an inhuman shriek (it’s unsettling beyond belief). When pursuing humans, the run with a wild pack abandon. Throughout the film, the camera hovers on moments or scenes, asking us to wonder what’s going on. A floor cleaner mindlessly moves his cleaner across the floor and the camera lingers on him for what feels like ages – is he a pod person? Or is he just an ordinary Joe going about his work? Kaufman sprinkles moments like this throughout the film.

He and screenwriter WD Richter also tap into a sadness of the late 1970s – the world of the hippie, where it felt the world might change, is passing. Matthew, David and Jack all feel like old college buddies – you can imagine the three of them hanging out at Woodstock. Jack and Nancy have clung to their hippie lifestyle, but are reduced to running a mud-bath and trying to peddle Jack’s poetry to the bored and uninterested. David has repackaged himself into a soulless, impossibly vain and self-important TV psychiatrist, dishing out cod-advice and lapping up praise at swanky book launches. Matthew is a slightly grubby civil servant. Kaufman and Richter do a great job of suggesting the younger, more idealistic roots of these characters with minimal dialogue and action. It adds a rich theme to the film – are the Pod people and their mechanical, soulless routine just where the human race is going anyway? Is it any coincidence that the invasion takes places in hip San Francisco?

Kaufman shoots the film with an eerie off-kilterness, helped a lot by Michael Chapman’s excellent cinematography. Ben Burtt’s soundscape is also brilliant – from the creak of the swing at the start and the shriek of the Pod people, to the deafening silence late in the film of the almost completely converted San Francisco, as the Pod People go through the motions of their old lives, devoid of emotion. The design of the pods, and the growing replacement humans, is horribly eerie. This creepiness helps hammer home the sense of paranoia as more and more people are replaced by Pod people – leaving us, like the characters, constantly questioning who is “real” and who isn’t? Who can we trust?

Donald Sutherland is the perfect lead for this – he has both a slightly ground-down world-weariness but also a strong sense of maverick individuality. He’s an interesting, challenging actor and he’s very easy to empathise with. A lot of the film’s emotional force comes from the deep friendship (which could perhaps be more) between him and Brooke Adams (also very good). Leonard Nimoy offers a subtle inversion of his Spock persona, taking elements of Spock’s logical coldness and inverting them for both maximum smarm and creep. Goldblum and Cartwright are just about perfectly cast, with Cartwright especially good (and reaffirming her scream-queen skills) as a woman with a surprisingly sharp survival instinct.

Kaufman’s Invasion of the Body Snatchers is easy to overlook in the list of great American 1970s thrillers due to being both (a) a remake and (b) a science-fiction film. But this is an unsettling investigation of an America on the verge of changing from one type of generation to another. It’s unsettling, intriguing and gripping – wonderfully made and very well acted. It’s a film that understands paranoia, isolation and our love of our own individuality more than many others I can think of. It’s one of the great American 1970s films.