Re-watching Slumdog Millionaire, it’s surprising to think that back in 2008 this film was so garlanded with awards (EIGHT Oscars!) and heralded so quickly as a classic. While it’s a well-made and at times rather sweet (with a hard-edge) fable, it’s also seems slightly less unique and genre-defying than first appeared. Never mind a list of the greatest Best Picture winners, I’m not even sure it’s the greatest Danny Boyle movie. But saying this, it’s still a fine movie – and one I arguably enjoyed more re-watching it almost ten years on then when I saw it in the cinema.

Jamal Malik (Dev Patel) is an eighteen year-old Muslim, a chaiwala working in a Mumbai call centre. He enters the Indian Who Wants to be a Millionaire?, hosted by egotistical Prem Kumar (Anil Kapoor), and to the astonishment of everyone is one question away from the ultimate prize of 20 million rubles. Arrested by the police and questioned before his final show, he explains via flashbacks how his experiences allowed him to answer each question. His life-story is one of danger and conflict in the slums and criminal underworld of India, tied closely to his brother Salim (Madhur Mittal) and their childhood friend Latika (Frieda Pinto), whom Jamal has loved his whole life.

Part social-realist tale, romance, family drama and fairy-tale, Slumdog’s main triumph is probably its ability to juggle half a dozen tones and genres so successfully. This is most strikingly demonstrated by fact that so many came out of a film that opens with its lead character being waterboarded and tortured by policemen, saying it was a brilliant feel-good movie! In fact, Boyle’s film is far more complex, touching on themes ranging from child exploitation and prostitution to gangland politics to social corruption, via murder, betrayal and mutilation. How does this a film crammed with this sort of material make you feel rather positive at the end?

Boyle’s, and screenwriter Simon Beaufoy’s, trick is to follow in the footsteps of that other great juggler of urban social comment and larger-than-life characters – Charles Dickens. Dickensian is perhaps the best word to describe Slumdog – it throws the viewer into the slums of Mumbai, glancing at this world with all the keen social commentary Dickens used to bring to Victorian London. As young children, Jamal and Salim are thrown in with a Fagin-like gang boss, while Latika develops an (admittedly much more gentle) Estelle-like connection with them both. Like David Copperfield, our hero moves from place to place (or frying pan to fire!), with an episodic charm, each event adding to the spectrum of his life. It works really well as it taps into a reassuringly familiar story structure that makes us feel narratively safe, no matter how much peril our heroes undergo. 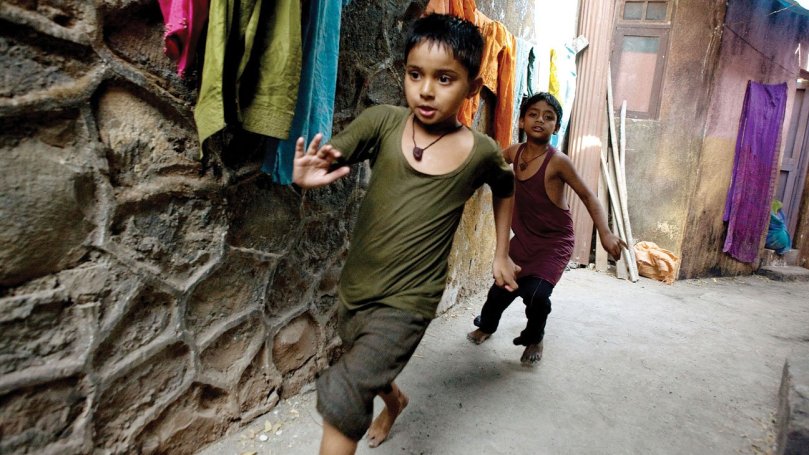 What’s fascinating is placing this familiar material into (for us) a more exotic location. I suspect many American viewers watching were even less familiar with India as such a mixture of extreme wealth and poverty sit side-by-side so naturally (and again how Dickensian does that sound?). Anthony Dod Mantle’s cinematography is astounding for its energetic immersion in the streets of Mumbai –it’s like an explosion of Boyle’s high-octane, camera-shaking style seen in so many of his other films. It not only makes the film feel fresh and vital, it also manages to present India as something very different for those only familiar with the country as a Taj Mahal postcard.

The most compelling parts of the film are those in the first half that throw us into the Mumbai of Jamal and Salim’s childhood. Helped immensely by six terrific performances from the child and teenager versions of our three leads, these sequences (just over the first half of the movie) immediately involve the viewer in the fates and feelings of these characters. Perhaps because the film is shot in such an immersive style, you feel as if you have experienced the dangers (and occasional joys) alongside them, and developed a close bond with them.

Despite the romantic plot of the movie, the true story is the jagged relationship, with its loyalties and betrayals, between the innocent, gentle dreamer Jamal and the more ruthless, realist Salim. The film charts the lengths they will go to protect and help each other – or sometimes in Salim’s case not. Salim is a fascinating character – easily the deepest, most conflicted of the three – who even as a child has a moral flexibility, happy to gain the benefits of a ruthless criminal lifestyle, while still having enough conscience to know what he has done with his life is wrong.

In contrast, the relationship between Latika and Jamal is far less complex. Frieda Pinto doesn’t actually appear until almost two thirds of the way into the movie – and she and Patel have only really one dialogue scene together to establish a romantic link. The romance between them is in fact the standard fairy-tale – two young friends as children who become unknowing sweethearts. The film relies on us being invested in their fates as children to want to be together, rather than building a link between two grown adults. This is the structure of a Prince Charming and a Princess in distress rather than grown-up storytelling – but it clearly works because it taps into our own fundamental first experiences of how stories work.

Dev Patel is a very sweet and highly engaging lead – and how could we not be immediately on the side of a pleasant, gentle young man whom we first see hanging from a ceiling with electrodes on his feet? Patel has a low-key decency about him that becomes more engaging the more you watch the film. Since most of his narrative function is to offer linking scenes to the far more dynamic and exciting flashbacks – and since the character of Jamal has very little real depth to him beyond “he’s a good guy” (again like a fairytale his innocence is untouched by events) – it’s quite a testament to his performance that you end up feeling as close to him as you do.

But it’s clear to me second time around the framing device of the Who Wants to be a Millionaire contest is the most disposable, and least interesting part of the movie. It does have the film’s most outright enjoyable adult performance, a swaggering, ego-filled turn from Amil Kapoor, but it’s still all much more predictable, obvious and functional than the adventures we see as our characters grow up. We know Jamal is going to keep getting things right (and thank goodness each question he answers, he learned the answers consecutively through his life! What a mess that might have been otherwise narratively!), so the fact that Boyle keeps what is essentially the same scene each time seeming interesting is quite something.

The gameshow however is the “quest” of this romantic fairy-tale. And fairy-tale is really what the film is: Jamal is there to try and find and save Latika. So in the end it doesn’t really matter that Latika hardly feels like a character, or that we’ve been given no real reason to think she and Jamal are in love other than the film telling us that they are, or that the plot of the film is really as flimsy as tissue paper. The film is a dream, a romantic fable. The genius of Boyle is to use a whole load of familiar, Dickenisan-style tropes to place this into a social-realist travelogue, a dynamite dance of flamboyant film-making techniques. So perhaps that is the point about Slumdog: on repeated viewings, like fairy-tales, its plot tricks and narrative sleight-of-hand become more obvious. But you get more of a respect for the confidence with which the trick is played.