There are few things that classic Hollywood did quite as well as a melodrama. Adapted loosely from a James M Cain novel – its murder plot line is a flourish solely for the screen – this is a triumphantly entertaining picture that mixes themes of sex and class with good old-fashioned family drama. It’s got psychology and it’s also got the high-concept family feuding around the building of a restaurant business that you could find in Dynasty. Put simply, Mildred Pierce is a prime slice of entertainment.

After her second husband Monte (Zachary Scott) is shot dead, Mildred Pierce (Joan Crawford) is brought in by the police for questioning. After the collapse of her first marriage to Bert (Bruce Bennett), Mildred has expanded her home-baking business into a full restaurant chain, with the support of Bert’s old business partner Wally Fay (Jack Carson). Mildred’s goal is to provide for all the needs of her eldest child Veda (Ann Blyth), a selfish snob who despises her mother for having to work for a living. The tensions between self-sacrificing mother and demanding, unloving daughter, lead Mildred to take a series of disastrous personal and business decisions, culminating in her wastrel, upper-class, Veda-approved, second husband Monte going down in a hail of bullets. But who pulled the trigger?

The murder mystery plotline adds effective spice to this very well directed (Michael Curtiz is at the top of his game) melodrama. Full of domestic thrills and spills, it races along like a combination page-turner and soap, perfectly matching a deeply sympathetic, self-sacrificing heroine with a host of deeply unsympathetic wasters, chancers and bullies. It’s capped by giving our heroine possibly the least sympathetic child in film history, the deliberately selfish and greedy Veda.

Sure you could argue that its psychology is either pretty lightly developed, or thrown in only for effect. It’s never clear when or why exactly Veda and Mildred’s relationship went south so completely, or where Veda’s deep resentment and ideas above her station come from. It also avoids looking at how Mildred’s complete devotion has probably completely spoiled a child who clearly needed to be told “no” a lot more, a lot sooner. But it doesn’t really matter as the film follows the logic of an event-filled plot-boiler, throwing revelations and cliff-hangers at you left, right and centre.

In the lead, Joan Crawford took on a role that many had turned down before her – stars at the time were not keen to be seen playing roles that suggested they were old enough to have mothered children as old as Ann Blyth. The decision to push for the role paid off as she netted an Oscar and it’s the finest performance of her career. A somewhat haughty actress, Crawford here demonstrates depths of vulnerability and tenderness as a much-put upon woman who, despite everything, will stop at nothing to give her daughter what she wants. Crawford dominates the film, her air of self-sacrifice never once tipping over into self-pity, even as the character so desperately seeks for the sort of love and affection that is denied her from those around her. 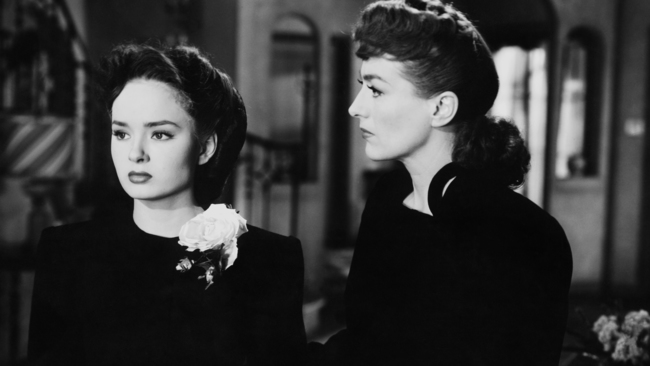 Around her most of the cast – with the exception of Eve Arden’s entertaining, wise-cracking best friend (Oscar nominated) – are basically a bunch of sharks. None sharper than Ann Blyth’s (also Oscar nominated) sweet-faced but dead-inside daughter. Rarely has a display of more naked grasping, snobbish disdain ever been captured on film, matched with unapologetic greed. Veda has no compunction about the moral consequences of her actions and, like Zachary Taylor’s archly lazy Monte, is as interested in spending Mildred’s money as she is contemptuous of its source.

Curtiz’s film constantly however plays with our judgements and expectations of people. Veda has more than her share of moments of pain and vulnerability as she shares some of the more painful travails of her mother. Similarly, Wally Fay (very well played by a roguish Jack Carson) oscillates between being a trusted confidante of Mildred, and a lascivious greedy creep. First husband Bert (a somewhat dry Bruce Bennett) starts as a love rat but may have more decency about him than anyone else (except Mildred).

The film is wonderfully shot in luscious black-and-white by Ernest Haller, in a dynamic noirish style. Water reflections lap across ceilings. Smoke from fires and cigarettes rises up and seems to dance and swirl in the light. There are some beautiful shots of faces – the camera work in particular perfectly locates a vulnerability in Crawford’s superior features – and there is a beautiful shot late on when two people caught in an illicit kiss roll their heads back from the shadows to emerge into the light. The entire design of the film is spot-on, and it looks and sounds fabulous today.

Mildred’s struggles make this a brilliant example of the stereotypical “women’s picture”, a tale of a woman struggling against all the odds to make her way in the world, with the twist that the daughter she is straining to support is a monster and the men she chases are feckless wasters. Mildred makes chronically terrible decisions throughout but for the best of motives – and part of the film’s appeal is that you are so invested in her fundamental decency you are willing her not to make the same mistakes again and again.

Curtiz’s melodrama is brilliantly enjoyable and never lets up. It’s also a feminist icon of a sort – Mildred is never punished for having a career, indeed she’s celebrated for it (and is far more savvy about it than nearly all the men). She leaves her husband, runs her own household, pushes for her own divorce all while protecting and providing for her child (not her fault the child ain’t worth it). Mildred Pierce is ahead of its time, and still a fabulously entertaining film.