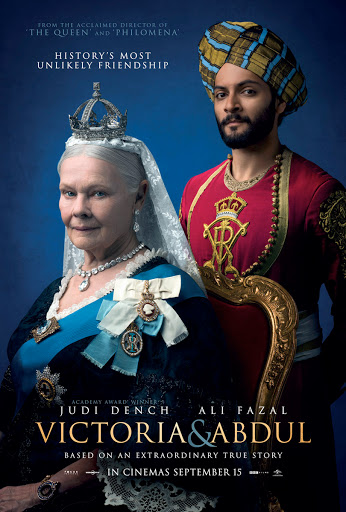 In the last decade of her life, Queen Victoria (Judi Dench – who else?) makes an Indian servant, Abdul Karim (Ali Fazal), one of her closest friends and advisors. As Victoria and Abdul become closer, the rest of the court are outraged – bad enough that the Queen is spending all this time with an over-promoted servant, but an Indian as well?!

The fundamental events of Victoria & Abdul are true. There was a man called Abdul Karim – and Victoria did raise him from servant to a confidant. He did cause conflict in the royal household and was finally sent back to India after her death, after surrendering most of his papers. But Victoria & Abdul repackages this friendship into a cosy, Sunday-afternoon entertainment, bereft of depth. And carefully works on the rough surfaces to make the story smooth and easy to digest.

The film is clearly trying to ape the success of Mrs Brown – a far more intelligent and emotionally complex (if similarly heritage) film that looked at Victoria’s previous all-consuming friendship with a male servant, John Brown. But that film didn’t close its eyes to the negatives of such relationships, as this one does. It made clear royal attention can be fickle – and being elevated above others can help make you your own worst enemy. In that film, after a honeymoon, the friendship declines into one of residual loyalty but reduced affection. It’s a realistic look at how we might lean on someone at times of grief, but separate ourselves from them later. Victoria & Abdul takes only one lesson from Mrs Brown: that a close bond between monarch and commoner is heart-warming.

The film in general is in love with the idea that if the Queen could only speak directly to her people, the world would be a better place. It presents a Victoria stifled by court procedure who knows very little about her empire and is constrained by the courtiers around her. It wants us to think that if the Queen took direct rule, she’d be kinder, wiser and more humane. That this figurehead symbol could craft a better British Empire if she was an absolute monarch.

Unfortunately, it doesn’t work. This romantic view of “Victoria the Good” is comforting stuff, but undermined even within the film by our introduction to the Queen at a royal dinner, where Victoria stuffs food down herself so quickly that mountains of untouched food goes uneaten on the plates of the other diners (as all plates are removed the moment she is finished). And despite being told that the Koh-i-noor diamond was stolen by the British (to her surprise), she still doesn’t think twice about wearing it later in the film while in the midst of her Indian passion. And while the real Victoria loathed the racist attitudes of some at her court, she still clearly sees herself as a paternalistic mother figure for India, which could of course never be able to make its own decisions about things.

Not that the film is interested in tackling more complex ideas of the position of India and its independence. It’s similarly confused by Abdul himself. In a more interesting film, Abdul would have been partly naïve servant and partly charming rogue. He very carefully spins an invented story of himself as a teacher and thinker (he’s actually a clerk from a fabric office) and it would have been interesting to see his building of a relationship with Victoria at least partly being based on self-gain. He certainly gains an awful lot from her – from his own carriage on her train to a home and his own servants. It would have been possible to have this side of him and still have his loyalty and friendship to the Queen being genuine. But it’s too much for the film to tackle.

An Abdul who was consciously playing a role of exotic thinker might have come across as a scam-artist – but would have given the film a lot more to play with, when the royal court is full of people positioning and presenting themselves for influence. Adeel Ahktar’s fellow-servant Mohammed even suggests in one scene that this is what Abdul is doing – and good luck to him. But the film is scared that this could be seen as endorsing the court’s fears about Abdul. So the character is neutered into nothing: he becomes exactly the sort of empty “exotic”, free of opinion and character, that filled out the extras list of a 1940s epic. He has no agency, never makes any decision or expresses any opinion. And his feelings for Victoria are presented as totally genuine which, combined with his foot kissing, turns him into someone who looks and feels really servile.

This is because the film wants to tell the story of a perfect friendship, with the British upper classes as the hissable baddies (never mind that no one is more upper class than Victoria). Never mind that Abdul’s action will indirectly condemn Mohammed to death in the British climate – or that while Abdul rises, Mohammed becomes his servant, still consigned to sleeping on the floor of his railway carriage. We learn nothing about Abdul. How did this clean-living saint become riddled with the clap? Why did he die so young? Did he really think nothing of the riches and honours Victoria showered him with? We don’t have a clue.

Instead the film keeps it simple with goodies (Victoria and Abdul) and baddies (almost everyone else). The most politically astute character, Mohammed, disappears and never allows things to get unpleasant. Jokes of the courtiers standing around aghast saying things like “Now he’s teaching her Urdu” are repeated multiple times. They’re fun, but it substitutes for dealing with the real issues.

It all has the air of ticking boxes. Frears’ direction is brisk, efficient and free of personality. Dench is great, but she could play this role standing on her head while asleep. Pigott-Smith (in his final role) is fine but Farzal has nothing to work with and Izzard provides a laughable pantomime role of lip-smacking villainy as the future Edward VII. The finest performance – handling the most interesting material – is from Ahktar. He’s the only character who seems to place what we see here in any form of context. Other than that, this film is just a string of very comforting heritage ideas, thrown together with professionalism but a total lack of inspiration.