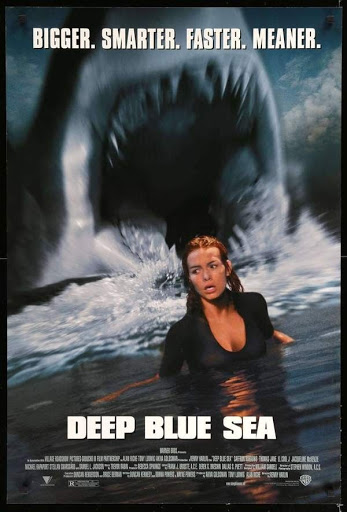 What would be your first idea for curing Alzheimers? Yup that’s right, you’d experiment on sharks brains: and to make those experiments even more effective you’d want the sharks to have really big brains. So, if you’re going to make them super-intelligent, you might as well make them super big, super ruthless with massive teeth. It’s just common sense. After all, they can never escape from your isolated sea laboratory could they? And even if they did, how much of a threat could they be?

Harlin’s film embraces its ludicrous set-up and B-movie nonsense from the start. Dedicated (and more than a little ruthless herself) scientist Dr Susan McCallister (Saffron Burrows) has bred these sharks to help with her obsessive dreams of curing Alzheimers. With millionaire funder Russell Franklin (Samuel L Jackson) flying into spend the weekend at the lab – with a skeleton crew on board – of course its time to run the final test. Can shark wrangler Carter Blake (Thomas Jane) help lead everyone to safety? Well no not everyone… it’s a monster flick after all.

There isn’t anything particularly surprising in Deep Blue Sea – other than one genuinely well-done shock death, which defies your expectations of which characters are the most important – but there are some decent jumps. Some nice little moments of action. A few good gags as sharks prowl through the base picking off the expected victims, while other characters use their wits and a bit of luck to take out the toothy opponents (even an oven gets employed as a weapon). But it’s quite predictable. And I predict that, if you are in the right mood, you might enjoy it.

The dialogue is unimaginative. Most of the acting is pretty wooden (Skarsgård in particular looks like a man yawning his way to a pay cheque) and the characters have clearly been scribbled on post-it notes. Harlin’s direction has a few playful moments, but there’s nothing special about it. You could pretty much predict where the film is going to go – and have a bit of fun spotting its various influences. But I think the film knows you are going to laugh at it. After all, mega sharks? Come on!

At the centre of this is the chemistry free line-up of Burrows and Jane. I feel a bit sorry for Burrows here. Her character is written as an all-consuming obsessive – she also is responsible for everything that happens – and, partly thanks to Burrows barely-concealed disdain for the whole thing, she never comes across as sufficiently guilty or apologetic. Test audiences watching the film reacted so negatively to the character – and you can’t blame them – that Harlin recut the film to make her more of the villain (not quite as much as the sharks, but up there).

A ‘romance’ with Jane hit the cutting room floor – although there are still several scenes where its DNA is readily apparent – just as well really as the actors are chemistry free. Jane in fact has more chemistry with LL Cool J (easily the films MVP as a charmingly offbeat, born-again cook) and the film works best when this bromance is at the fore.

Oh that, and when the sharks at the heart of it. The characters are so non-descript their fates will largely provoke laughter, but as a piece of popcorn rubbish Deep Blue Sea could be a lot worse. Sure it’s got no originality or real expertise about it all, with everyone chucking one in for the money, but its good fun. After all, who doesn’t love a vengeful super-smart shark eh?