Can you imagine a more exciting film for a 12-year-old boy, than one with dinosaurs walking the Earth once more? And not the sort of rubbery dinosaurs, that we always knew were really models, in classic films. I was 12 when I first saw this film, and these animals really did look 65 million years in the making: they felt real, with roars that deafened the ears and footfalls that made the cinema shake. Dinosaurs are hugely exciting, awe-inspiring beasts. So much so you can forget many of them were also ruthless killers, with really sharp pointy teeth. It’s that mixture of awe and terror that Steven Spielberg understands so well in this exceptional blockbuster, like he mixed Close Encounters and Jaws together in a lab and then let it run loose.

Boffins have worked out a way to clone dinosaurs from frozen DNA, stuck inside prehistoric mosquitoes. Naturally, what else would you do with this discovery but use it to create the most exciting theme park ever seen. What could possibly go wrong? Avuncular billionaire John Hammond (Richard Attenborough) has built the park – and he wants scientists and archaeologists Alan Grant (Sam Neill), Ellie Satler (Laura Dern) and Ian Malcolm (Jeff Goldblum) to give it the thumbs up. Sadly however things are set for disaster during a long, low-staffed weekend when an act of industrial espionage by disgruntled employee Nedry (Wayne Knight) leads to all control over the par being lost and the dinosaurs turning on the guests.

The rights to Chrichton’s novel were sold before the book was published, and it’s classic Chrichton set-up of science trying to play God, and landing us all in a moral quagmire and massacre. But first though, let’s not forget how awe-inspiring dinosaurs actually. It’s a long wait until we see any more detail of one than a fearsome eye. But when we do, Jurassic Park knows that for that brief moment we are all children again. As John Williams’ triumphant theme thunders out, and the characters stagger with breathless, tearful excitement in its wake, a Brachiosaurus towers over the screen. Spielberg’s camera perfectly hammers home the sense of wonder at the size and beauty of this gentle giant. Sure science is arrogant, but then if it wasn’t we’d never reach the stars, right? 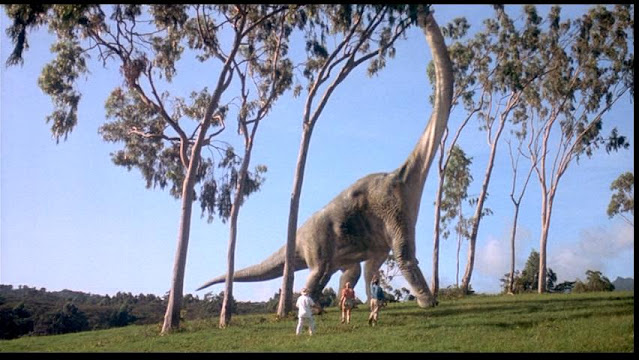 Spielberg’s film though isn’t just an awe-inspiring modern-day Planet Earth. Because the makers of this park also created plenty of fierce monsters, from the mighty T-Rex to the scarily smart and vicious velociraptors. And if the first half of the film is about the magic – that imperious brachiosaurus, a sleeping triceratops, a baby velociraptor emerging from its egg – the second half is about the horror of finding out what happens when man’s hubris comes back and (literally) bites him in the ass (and plenty of other places). Because when the Raptors get lose, suddenly this park isn’t magic, but a terrifying death-trap where the guests are the prey to out-of-control exhibits.

The second half of the film – from the moment the T-Rex bursts through its non-functioning electric fence to rip apart two jeeps (and of course eat a lawyer cringing on the toilet) – is a terrifying, giddy, exciting monster-chase, with a director who hasn’t delighted this much in the relentless horror of nature since Jaws. And Spielberg gets to play every game here. Huge dinosaurs stomping on cars. Velociraptors playing ruthless hide-and-seek in isolated power houses. Open spaces becoming terrifying hunting grounds and everyday ones like kitchens become terrible traps. What chance do human beings have when there are “clever girls” like the raptors running around?

Jurassic Park is singularly responsible for elevating the raptor, a previously largely unknown dinosaur, to the front rank of dinosaur fame. There is always a romantic appeal to the T-Rex. It’s the king after all, the biggest and the most famous – and its status in the public perhaps reflects the fact that the film sort of asks us to root for it. After all, it only eats the lawyer. And when the final act comes, it’s the T-Rex’s intervention that saves our heroes bacon. The real monsters are the raptors: supremely clever (they can open doors!), totally ruthless, they hunt in packs, they move super-fast and they look like a disturbing mix between bird, human and lizard. Spielberg makes them one of the most terrifying monsters in film, that more than live up to their extended build-up. 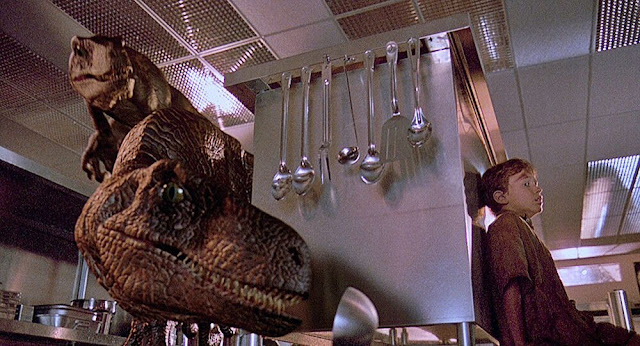 Spielberg directs the entire film with his usual devilish wit and fiendish mastery of the set-piece. The film draws some neat, if simple, story-lines for its human characters. Will Dr Grant overcome his aversion to children? Each of them gets a snippet like this. The actors are often (literally) in the shadow of the dinosaurs, but they are big part of communicating the sense of awe. Neill and Dern go through the motions with a certain charm. Goldblum steals most of his scenes as a rock ‘n’ roll physicist, riffing in the way only he can. Richard Attenborough reinvented himself from a career of creeps to cuddly grandad as a Hammond who shares nothing but his name with the book’s ruthless capitalist.

But the real stars are the dinosaurs. And even almost thirty years on, the special effects are really breath-taking here. These feel like real, living, breathing creatures, and Spielberg knows how to shoot them. Even today it still casts quite a spell. It’s telling that none of the sequels, except Jurassic World (which was made by the people who grew up on this film) gets near to matching the mix of magic and horror that this one hits. Sure, it’s a film so confident of success that it fills one scene with shots of the park merchandise (available in a shop near you now!), but then that’s because it’s got a master at the helm and the greatest attractions in 65 million years.

With its underlying plot of the dangers of mankind’s hubris – plus some rather witty criticism of how a park reliant on wild animals might have struggled to work anyway if the dinosaurs refused to emerge from the shadows of their huge paddocks for the tourists – Jurassic Park gives you something to think about, while still terrifying you with ruthless monsters. It’s a classic.]