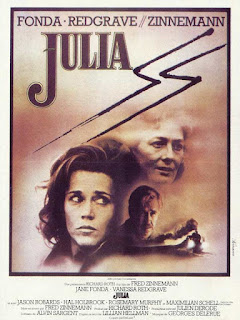 Playwright Lilian Hellman (Jane Fonda) remembers her close childhood friendship with Julia (Vanessa Redgrave), the daughter of wealthy Jewish parents being bought up by her grandparents. As young women, their lives take dramatically different routes: Lilian finds eventual success with The Children’s Hour, with the support of her mentor and lover Dashiell Hammett (Jason Robards); Julia travels to Vienna and then Germany where she becomes involved in anti-Nazi activity. Eventually, the need for money leads to Julia asking Lilian to smuggle funds over the German border.

That’s the meat of Fred Zinnemann’s old-fashioned, highly-genteel memory piece that also manages to make it sound far more exciting and interesting than the dry, worthy, middle-brow story that actually ends up on screen. What’s missing from the film almost completely is passion. This is a story that required fire: a sympathy for radicalism, or anger at the targeted cruelty and injustice of fascism. It gets none of this, instead offering a handsome reconstruction of period details, all filmed with a Golden Age glow, and a narrative focus that feels like it’s aimed at the wrong character.

It’s part of why this awards-bait drama hasn’t lasted in the public perception (it’s very hard to find a copy to watch – really striking for a film nominated for 11 Oscars and winning three, including two acting Oscars). There is very little really rewarding either emotionally or narratively here. The film lacks a real sense of danger or foreboding – even a scene showing fascist thugs throwing Jewish students off a balcony in Vienna is shot with a striking lack of edge or horror. And it unbalances itself by giving more time and priority to Hellman’s struggles to come up with a play “worthy of her” than it does to the title character and the real drama of her struggles. Redgrave is on screen for about 14 minutes. It’s effectively like watching The Pianist but entirely from the perspective of Emilia Fox’s character rather than Adrien Brody’s.

What we end up with is a film that feels old-fashioned, dry and respectable. It offers everything that will impress you, and reassure you that it is important film-making: a big subject, famous names, actors giving emotional performances, period detail, a tragic ending. But it lines these factors up in a way that never ever comes to life dramatically. There is a story buried in here about friendship – and Fonda and Redgrave are very good at selling a strong personal bond, especially considering their limited time on screen together – but what should be the heart of the story gets lost in a biography of Hellman, a digression into her relationship with Dashiell Hammett, and the lack of insight the film seems to have into the fate of Jews and outsiders in an increasingly fascist Europe.

The film’s only real sequence of interest is Hellman’s dash with money across the border and illicit meeting with Julia, a sequence involving coded messages, switching of hats and double-meaning conversation which fits with a spy novel. Zinnemann films this with a fine air of tension and intrigue – but it’s the only time the film stumbles to life.

I think Zinnemann struggled to find what really compelled him to tell this story. Which is a shame as a Julia-focused story – a woman struggling against a system – would have been meat and drink to the director of High Noon, From Here to Eternity and A Man For All Seasons. Instead, his skill from those films of empathising with characters trapped in a desperate situation and forced to take a stand on principle, is lost. In the end he and the film find little to interest them in Hellman, the successful novelist who feels a middle-class intellectual’s guilt at not doing more to help, who is fundamentally a footnote in a far larger story of rising Nazi terror in Europe.

The film has also perhaps faded from public attention because subsequent controversy revealed that a large part of this true story was almost certainly self-aggrandising bull-shit by Hellman. A New York psychiatrist, Muriel Gardiner, claimed in 1983 that Julia’s story was her story and that she had never met Hellman (but they did share a lawyer). No trace of a “Julia” has been found in Hellman’s life, and no evidence at all that she ever undertook this dangerous dash into Germany. Zinnemann also fell out with Hellman, privately coming to believe she was “an extremely talented, brilliant woman, but she was a phony character” and said his “relations with her were very guarded and ended in pure hatred”. Knowing that, it’s hard not to see the same distance on the screen.

Saying that, Jane Fonda is very good in the film, surprisingly fragile, uncertain and scared, and plagued with guilt that she cannot do enough to help her friend. Redgrave won an Oscar for her committed and passionate performance, which tapped into her radicalism and gives a slight character a great deal of depth (in her speech, the pro-Palestinian Redgrave made a famously controversial political speech denouncing “Zionist hoodlums”). Robards won the film’s other acting Oscar, for a professional turn as Hammett. In a very weak year for American film, Schell also landed an Oscar nomination for a brief cameo as a go-between Hellman meets in a Parisian park.

The performances are fine and the style and manner of the film is reassuringly middle-of-the-road. There is everything here to convince you this is an important film, apart from drama, purpose or conviction. Perhaps it’s so hard to find, because so few people have looked for it since 1977?