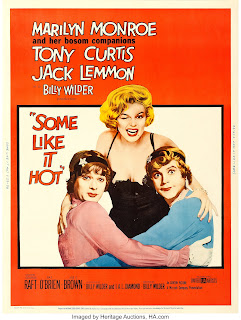 It’s the funniest comedy that ever started in a hail of bullets. It’s the best chick flick to stare two men. It’s probably Billy Wilder’s sweetest comedy and it’s almost certainly its most beloved. They say Nobody’s Perfect, but you can be pretty sure this film gets as close to it as possible.

In 1929 in Prohibition Chicago, down-on-their-luck musicians saxophonist Joe (Tony Curtis) and double bass Jerry (Jack Lemmon) can’t get a break. First the speakeasy they are playing gets busted by the feds. They’ve lost all their money at the dog track. And, oh yeah, they accidentally witness gangster “Spats” (George Raft) eliminate his competition in a hail of bullets. They’ve got to get out of town incognito and quick – so what better option but joining an all-female band as “Josephine” and “Daphne”? Problem is, playing at a hotel in Florida, Joe and Jerry find themselves in all-sorts of romantic entanglements: Joe is wooing lead singer Sugar (Marilyn Monroe) in the guise of heir to an Oil fortune, while Jerry is wooed by smitten millionaire Osgood Fielding III (Joe E Brown). And if that’s not bad enough – guess which hotel the mob are having their annual convention at?

Wilder’s comedy is a fast-moving, brilliantly written (by Wilder and IAL Diamond) buddy comedy with a twist that dives into a whole world of gender and identity concepts that puts it way ahead of its time. Shot in luscious black-and-white (Wilder’s preferred style, and colour exposed all too strikingly the drag act look of Curtis and Lemmon), every scene has at a zinger and our heroes fall into one a string of madcap situation through misfortune and rank incompetence.

But the film’s real interest is in how far ahead of its time its gender awareness was. When they first appear disguised at the train station, the camera pans up their legs and behinds in just the way you would expect it to do (and indeed it does seconds later with Monroe) to ogle the women, only to reveal it’s the men striding their way down the platform. Both of them comment (and complain) on the objectification and unwanted physical attention (from slapped bums upwards) from men – “it’s like a red rag to a bull” Joe describes their feminine appearance, before he and Jerry complain they can’t wait to get back to being the bull again. It’s part of the fine tight-walk the film works, where the men are both men and women, victims and hypocrites, open-minded and conservative. 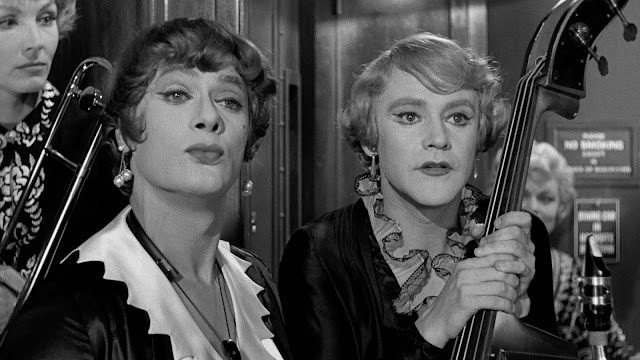 Dressing as women seems to give both of them a new perspective on things. Lothario Joe seems to gain a new sympathy for women – while at the same time, passing himself off as a millionaire to seduce Sugar with a string of lies – and comes to see himself as exactly the sort of lousy bum he probably has been. For Jerry the whole experience is a revelation. It’s part of as fascinating debate as to how much this film is aware of transgender and homosexual urges, and how much it’s just a very wittily delivered joke that’s so respectfully done it can be embraced by one and all. But for Jerry, the whole experience seems to redefine his own internal perception of himself.

It’s there from when he first glances Monroe at the train station: after tripping in his heels, he’s stunned when she works past, not by her looks, but by the ease she moves, his eyes not starring at her behind with lust (as Joe’s does) but with envious admiration. On the train he takes the blame for Sugar’s illicit bourbon – is it a sense of fellowship, or a bizarre way of making a pass at her? This leads to a slumber party in his bunk with the whole band, all in their nightwear – through which he constantly forces himself to remember he’s a boy (seemingly out of sexual excitement). But we very rarely see Jerry out of some layer of feminine disguise: and later confusion seems to abound during his courtship from Osgood, where he delights in the dancing, the jewels and the engagement and has to disappointingly remind himself that he’s a boy. After initial doubts Jerry finds a sort of freedom in dressing as a woman, that Joe never does.

How much is Some Like It Hot aware that it is playing around with fluid gender perceptions, and how much is it a stunningly well delivered joke? It’s not clear – and I doubt any film-maker in 1959 would even have the vocabulary to begin to conceive the sort of conversation the film provokes today.

But does it really matter when the jokes are this good and the performances so brilliant? Jack Lemmon is superb here, the sort of career-defining performance actors dream about. Anxious, fussy, slightly whiny, Jerry becomes the more playful, sassy Daphne – and what Lemmon does brilliantly is make both personalities fully-formed yet existing consistently within the same character. That’s not mentioning his verbal and physical comedic gifts and consistently perfect timing, his performance comedic but not a broad drag act. He makes Jerry/Daphne a living, breathing person anda comedic character, someone we can never imagine meeting in real life but also would not be surprised to sit down next to on a bus. This is skilful acting on another level.

Which is not to do down Tony Curtis, who is very funny as the lothario Joe uncomfortably squeezed into feminine attire. While Jerry comes to relish some of the accoutrements of ladies clothing, Joe is never as comfortable – for him it is practical solution. That doesn’t change Curtis’ hilarious comic timing – or his wicked Cary Grant impersonation (“No one talks like that!” Jerry complains) when taking on a third disguise as a Shell Oil heir, which also seems like a sly parody of Henry Fonda in The Lady Eve. Curtis’ comic timing is as faultless as Lemmon’s, and the two actors produce such a sparkling double act, it’s a shame they didn’t work together again.

As the third wheel, Monroe was never so radiant, culturally iconic and luminous than she was here. Reports are rife of the troubles she caused on set – the hours waiting for her to turn up, the lines she couldn’t or wouldn’t learn, the dozens and dozens of talks she demanded for the even the simplest scenes (this in particular drove Curtis – an instinctive actor whose performance declined with retakes – up the wall – it’s fun to spot how little they actually share the same shot during the film). Wilder later commented she was a terrible actor to work with – but a God-given talent up on the screen. Can’t argue with that, and she turns a character who, on paper, could be a dumb blonde joke into someone very sweet, endearing and lovable, who we never laugh at (Monroe is a generous enough performer to never worry about making it clear to the audience that she is smarter than her character is, or treat her with contempt). 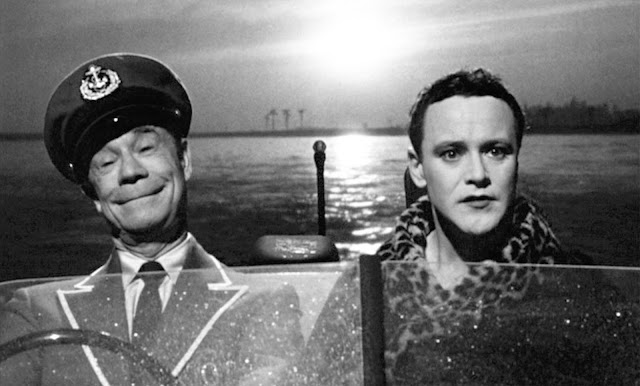 Wilder brings it all together with his genius behind the camera. He cuts the film with superb comic timing – the intercutting between the seductions of Joe/Sugar and Jerry/Osgood are masterfully done – his sense of the momentum is spot-on and he is as skilled with flat-out farce as sophisticated word-play. That’s not to mention the wonder of the tone – he makes a concept that had the suits sweating in 1959, easy to swallow without ever once treating the idea as a revolting perversion, making it funny but never humiliating. The film’s sweetness is partly why its become so loved.

Possibly the funniest film ever made – and it’s also littered with gags about old-school gangster films, taking advantage of its inclusion in the cast of the likes of Raft and O’Brien enjoyably sending themselves up – it’s won a place in the hearts of film buffs and casual moviegoers for generations. And it’s going to continue to do so. With one of the greatest closing scenes ever, it’s always going to leave you wanting to come back for more.