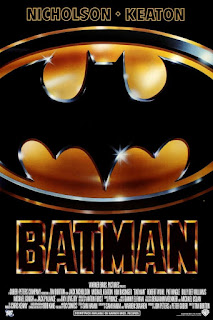 Strange to think, but there was a time when comic book movies were not Hollywood’s be-all and end-all. Instead, they were slightly embarrassing, campy messes, big-name actors were a little ashamed to appear in and studio executives were convinced no-one outside a comic-book shop would be remotely interested. So, you could say Batman is one of the most influential films of the last 30 years, a massive box-office smash that treated its source material fairly seriously. For the first time ever, it was suggested these films could be dark and adult, as well as fun. Sure, there is a lot more goofy humour in it than you might remember, but it changed how this genre was perceived.

It’s an origin story of sorts. Bruce Wayne (Michael Keaton) has just started his campaign as Batman, the masked vigilante terrifying criminals at night in crime-ridden Gotham city. A late-night scuffle at a factory stuffed with toxic waste (but of course) sees psychopathic gangster Jack Napier (Jack Nicholson) tumble into a vat of chemicals. Napier emerges, disfigured and insane, as The Joker and starts a campaign of terror across Gotham. A campaign only Batman can end.

Fans feared during its production that the film would follow in the footsteps of the campy 60s TV show. So many letters of complaint (at least 50,000 – imagine how many tweets that would translate into today) at the casting of ‘comic actor’ Keaton hit the officers of Warner Bros, the company’s share price even took a dip. Fans were only reassured when the film opened – and you know you’re in for something heavyweight, as soon as Elfman’s strikingly gothic yet bombastic score echoes out.

Gothic is the word here: Gotham is imagined as world where Art Deco meets Steampunk by way of German Expressionism – it’s like a Fritz Lang explosion in a graphic novel panel. The film was a brilliant twist on noir, with every street hosting a looming nightmare. This was a dark, sinister world where it was always night (fitting for the Dark Knight) and horrors lurked around every corner.

The nightmare at the heart of the film is of course the Joker. Nicholson was so uncertain about doing the film that he struck a deal giving him unprecedented control over the hours he worked, the length of the shoot, the billing and above all a huge back-end salary on box-office and merchandise (the deal was so good, he also made millions from Batman Returns, the sequel he didn’t even appear in). But it was worth it as the film benefits hugely from Nicholson’s cultural and artistic cache, but also his flamboyantly, unashamedly demonic performance, a grinning imp clearly having a whale of a time. Shrewdly, Burton recognised the Joker was such an outrageous character he could provide all the campy, OTT humour some viewers expected – and because it was in tune with the anarchy of the character, the fans wouldn’t mind. Which of course they didn’t, because it’s Jack. 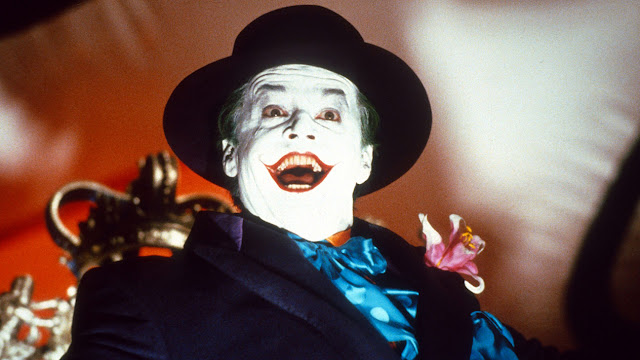 Nicholson soaks up nearly all the energy of the film, leaving very little left for Keaton. Almost certainly very aware of the overwhelmingly negative reaction to his casting, Keaton plays the role absolutely dead-straight. So dead-straight in fact, that he all but forgets to bring any life to the character what-so-ever. Batman is a humourlessly sober hero (the rubber headset also meant Keaton couldn’t hear anything on set) while Wayne has a timid shyness that masks personal trauma. Keaton hits the notes very carefully and seemingly has decided to hide all the manic energy he had shown elsewhere. He effectively concedes the film to Nicholson – and it says a lot that he even looks overawed by Kim Basinger’s greater vibrancy as love-interest Viki Vale.

Watching Batman today, with our attitude to this sort of material changed completely (not least by Christopher Nolan), it’s striking how much more goofy this film seems. It actually says a lot that this was hailed as the darkest, most serious comic-book movie ever. It’s crammed with Burtonish pratfalls and visual humour, from tea trays blocking bullets to Basinger fainting when surprised by a jack-in-the-box. Classic Hollywood imagery is spoofed – at one point the batwing flies over the clouds, holds position dead-centre of the moon and then dives down while everyone in the film is dressed in a mix of pastiche 1930s style and 1980s clothing. In no way could you mistake anything here as happening in something approaching the real world (compare and contrast the few-degrees-to-the-left reality of Batman Begins).

Burton was in fact an odd-choice for director, with only two live-action films under his belt. He’s not been fond of Batman – he called it “mainly boring to me…more of a cultural phenomenon than a great movie” – and the film is an odd fusion of styles. Burtonish dark humour and surreal dashes, mixed with blockbuster action and Prince songs. The film itself has a drifting and unfocused plot (part of constant studio rewriting – shooting the climax Nicholson asked Burton “Why am I climbing up these stairs?” to which Burton responded “We’ll work it out when you get to the top”) which plays around with ideas of trauma motivating these characters but goes nowhere with it. The Joker has no scheme and the film gives him no real personality depth or manages to explore his anarchism in the way The Dark Knight did. Events sort of happen with a shady logic and an unconnected inconsistency, until the film decides to end with a parade climax and rooftop fight.

What’s also striking is how little the comic books are treated like Holy Text by the film-makers (a complete no-no today, where even the slightest deviation from the writ leads to an avalanche of on-line criticism). Batman offs criminals without a second thought, his backstory is radically altered, the continuity merrily distorted. He seems less like a highly-trained fighter and detective, and more a gamely-trying brawler dependent on gadgets. Every character outside Batman, Vale and, I guess, the Joker is a clueless old buffer. While the film is inspired by the look of some of the comic books, it basically has no interest at all in their mythology or deeper themes.

Batman is entertaining but manages to feel long – largely because its plot is vague and drifts, without a tightly controlling theme or plot arc. It’s at times rather inconsistently edited – watch the sequence in the art gallery that is rife with continuity errors – and the film is slightly in awe of Jack Nicholson’s exuberant performance that dominates the film and crushes the life out of any narrative. But it showed that comic books could take place in a world that was dark and imposing rather than primary coloured and that superheroes didn’t need to wear their underpants over their trousers to get the crowds in. For all its flaws, it’s the first stone in the road to the Marvel Cinematic Universe (and yes I know it’s a DC comic).