We saddle up one more time for this belated sequel, which does enough to be the second-best film in the franchise 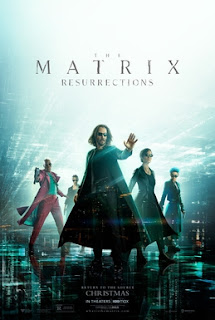 Thomas Anderson (Keanu Reeves) is the most famous games designer in the world. His award-winning game The Matrix revolutionised the genre, but now he needs to make a sequel. But Anderson is juggling all sorts of depression, chugging blue pills like there’s no tomorrow in order to keep back disturbing feelings and sensations that there is more to that Matrixconcept than he remembers. Was it in fact closer to reality? Why is he so drawn to Tiffany (Carrie-Anne Moss) the woman he sees in his coffee shop? Why is he unsettled by his business partner Smith (Jonathan Groff)? Should he follow the White Rabbit?

Bringing The Matrix back is a tough ask. It’s been well over twenty years since the first film revolutionised action and sci-fi – and then the two sequels managed to progressively strip out any of the fun, romance and wonder from the original. Now Resurrections attempts to put it all back in again. It’s a noble attempt – and this is easily the second-best Matrix film – but there is still an air of obligation about the whole thing.

It’s hard to escape that feeling from the on-the-nose opening act, which literally includes dialogue from Smith to Anderson to the tune of: ‘Our parent company, Warner Brothers, say they want a sequel to The Matrix and they’re going to do it with or without us, so we might as well come up with an idea’. Partially set in a new Matrix where the events of The Matrix form the basis of an award-winning game everyone knows by heart, characters constantly riff excitedly on how some events in this film parallel those in the first film (always the first film). There is a spit-ball planning session at Anderson’s workplace, where his design team bounce phrases like “Guns. Lots of Guns” at each other or playfully mime out bullet time. I suppose this relates to Wachowski’s experience of having the Studio for years demand a fresh new Matrix film. But it is a little on-the-nose.

The self-reverential nature of the film continues throughout. From an opening that sees Hacker Bugs (a very good Jessica Henwick) watch a simulation of the opening of the first Matrix film – with a few changes – a mixture of homage and nostalgia runs through the film. As an alliance of humans, machines and programmes try to free Anderson/Neo from his new Matrix cage, they ease him in by playing (on huge projector screens) iconic scenes from The Matrix. Anderson’s flashes of memory, as things start to fall in place, are full of flashbacks to the earlier films. When Neo arrives in the real world, he finds himself in a dystopian future where he is a celebrity, and the events of his life are as much a part of this world’s folklore, as memories of the plot of the original trilogy is in the minds of my generation watching the film.

It’s quite a tribute that the film manages to keep all this self-reverential stuff balanced and neither becoming too annoying or collapsing in on itself. It does so because Wachowski manages to keep it playful. She’s clearly learned from the legacy of the two Matrix sequels, that puffed themselves up so much they burst. This features some discussions around truth, reality and choice but keeps them low-key and free of sequel’s aura of pomposity. It wisely (and plot logically) depowers Neo so that he is no longer completely invulnerable. It again makes him an outsider, fighting against a dominant system that seems to hold all the cards. And it puts at its heart a battle of two people to be together.

It’s also lovely to see Reeves and Moss back in these roles, which they fit back into with a charming ease and comfort – and also to see that their chemistry still exists. The plot of the film is at times garbled and even poorly communicated – it is very hard at times to understand why things are happening or what the rules are in this new Matrix (and its particularly hard to understand the plot around Smith, and how, if at all, he is restrained within this Matrix). But what you do understand is the emotional imperative that lies behind these characters actions – in a way that was often lost in the two original sequels.

The film also manages to keep more than its share of inventive action set-pieces. While its ending – a motorbike chase through a city where the whole population is turned against our heroes – feels very reminiscent of other things we’ve seen, earlier set-pieces use a lot more invention. In particular there is a very neat innovation of doors that jump thousands of miles – and see the characters move from one orientation to another as they pass through them. A chase through these allows for some dynamic movements and more than enough of the gravity defying bouncing and gunplay the franchise is famous for. New actors do very good jobs, in particular Henwick and Yahya Abdul-Mateen II as a new version of Morpheus and Jonathan Groff as a twist on Smith.

But Resurrections feels like a dutiful film and it’s laced with the odd clunky scene (none more so than a reappearance of Lambert Wilson, ranting direct to the audience about social media) and the odd gap in logic and plot definition. Its main problem is that it never feels essential. To bring the franchise back after all this time, into a world where its cultural cache has declined, you feel it needed to do something really special or redefining. It doesn’t really do this: it seems more interested in riffing on the past rather than building a future. It’s a reassuring film that hews closely to the plot and structure of the original film (deliberately so, with the characters even refencing similarities) that isn’t going to scare or annoy the fans – but also (and the film’s box office failure supports this) also not going to win over new converts. But it’s still the second-best film.