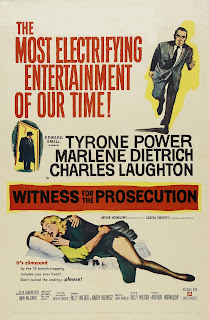 Agatha Christie is better known for detectives who unearth murderers, not lawyers defending those accused in court. But that doesn’t mean Witness for the Prosecution, a very effective courtroom drama, shirks on classic Christie flourishes. Witness has a single stonking twist that huge numbers of people never see coming (the end of the film comes with a sonorous warning entreating people not to spoil the surprises, the sort of anti-spoiler warning that would make Marvel proud).

Leonard Vole (an unlikely Tyrone Power) is the soldier and would be entrepreneur, who stands accused of the murder of a rich older woman (Norma Vaden) who conveniently left Vole her money. Defending Vole is richly-toned, highly-skilled barrister Sir Wilfrid Robarts (Charles Laughton), recovering from a heart attack and doing his very best to dodge the overly attentive concern of his private nurse Miss Plimsoll (Elsa Lanchester). Vole’s case looks difficult, with much circumstantial evidence stacked against him and worries about whether his German wife Christine (Marlene Dietrich) will stand by him or not?

Billy Wilder directs with a smooth professionalism – he later modestly claimed of his Oscar nomination, that it was like giving the crew that moved Michelangelo’s Pietá an award for best sculpture – but his real contribution (with fellow writer Harry Kurnitz) was sharpening the dialogue, expanding Christie’s characterisation (in particular adding much more shrewdness and eccentric pomposity to Robarts) and upping the zip of Christie’s original. It certainly met with the approval of the grandé dame of crime who listed this, and Lumet’s Murder on the Orient Express, as the only two adaptations of her work she liked.

The film is largely based around the courtroom dynamics, as witnesses are examined and cross examined and facts gently dragged into the light. There is plenty of quality theatrics, not least since Robarts and his opposition counsel Myers (a fearsome Torin Thatcher) are more than a little skilled at keeping things sparky for the jury. There is a hint of cynicism in Witness: Robarts needs to convinces himself of a client’s innocence, but there is a suggestion this is because it helps him work out how to effectively defend them, less because of any moral reasons. And certainly, the entire mechanics of the trial operates largely as a show, an entertainment with jokes and compelling stories offered by both sides.

There is of course no better showman than Robarts. Played by Charles Laughton in one of his last great – and possibly most enjoyable – performance, Robarts is an affectionate, witty performance of carefully studied eccentricity and barking bluffness. But there is also a vulnerability in him: Robarts needs to belief in his own legend and his ability to separate truth from lie (he even prides himself on his “monacle test”, using a reflection from it to shine in suspects eyes, believing a liar will get flustered and trip themselves up – needless to say it turns out to be faulty).

Wilder – with Laughton as a brilliant collaborator – transforms Robarts into a far more forceful and charismatic figure, making the late plot twists even more of a shock. If someone as professionally adept and plugged in as Robarts can be taken in, what chance do the rest of us have? Oscar-nominated, Laughton, a twinkle permanently in his eye, powers through moments of high court theatricality but also heartily enjoys the banter of real life, taking a real delight in his schoolboy mischief as he persists in having his own way.

A large part of that, is a running of dodging treatments and sticking to a diet of things that are bad with him. Wilder’s finest change from the original, in introducing Robart’s ill health and his love-hate relationship with his nurse Miss Plimsoll. Who is, of course, played by Elsa Lanchester, Laughton’s real-life wife. The chemistry between these two is spot-on, with Lanchester (also Oscar nominated – and unlucky to lose to Miyoski Umeshi in Sayonara) in particular playing the combination of world-weary exasperation and growing affection for Robarts perfectly.

Combined with those twists, it’s the interplay between these two that is the real highlight in the film – well that and the twists. Many of those twists are bound up with Marlene Dietrich’s character. Dietrich gives one of her most colourful and wide-ranging performances here. The secrecy of the film probably stopped her from landing an Oscar nomination (much to her regret – Wilder even apologised to her). Power is miscast – he lacks the required natural innocence and looks both too old and incongruously American – but fortunately spends most of the film in the dock.

The final twist is a doozy, perfectly delivered by the actors and Wilder. Wilder directs throughout with quiet authority – as well as fine sense of humour, in particular a stair lift scene that sees Robarts using the device as a tool to dodge being told what to do. Laughton and Lanchester in particular are wonderfully funny. It’s got some excellently handled courtroom tricks and you won’t forget how it turns out. It’s a solid example of Wilder’s skill behind the camera – but a very enjoyable film and a must for Christie fans.