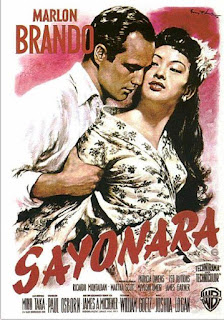 It’s post-war Japan and the American occupation forces have got very strict rules about what their soldiers are allowed to do with the native population: namely not marry them. Any suggestion of American soldiers finding themselves Japanese wives is frowned on at the very highest level. Something flying ace Major “Ace” Gruber (Marlon Brando) is about to find out when he’s transferred from shooting down commies in Korea. Airman Joe Kelly (Red Buttons) is determined to marry Katsumi (Miyoshi Umeki) – and nothing commanding officer Gruber or anyone else can say will dissuade him. Meanwhile, Gruber finds himself falling in love with Japanese actress Hana-Ogi (Miiko Taka) – and facing the exact same pressures to chuck her overboard as Kelly meets.

Sayonara is very much a Hollywood message film: that being interracial marriage is a fact to celebrate not condemn, with a subsidiary message focused on rehumanising the Japanese people for American audiences still holding strong memories of the Second World War. Like a lot of message films from the era though, its also slow, stuffy, self-important and more than a little dull – something its multiple Oscars can’t hide.

Shot on location, it often come across as a sort of Japanese travelogue which, for all its efforts to make the Japanese sympathetic, can only interpret them and their culture through a selection of cliches and generic expectations. The film is a parade of kimonos, lotos blossoms, tea ceremonies and geisha girls, all shot with a laboured flatness by Joshua Logan. Logan’s direction overflows with middle-brow earnestness, pleading for a little love and understanding, while shuffling together a series of stereotypical and predictable plot events. Logan also seems to struggle with the cinemascope frame, which frequently dwarves this intimate story.

It’s all told at a very slow pace: it’s remarkable that such a slim story manages to fill almost two and a half hours. Much of this is taken up with the romantic entanglements of Ace, half-heartedly engaged to General’s daughter Eileen Webster (a saintly understanding Patricia Owens, who practically asks to be thrown over), before a chance sighting on a bridge (of course it’s a soribashi bridge) leads to him falling head over heels in love with Hana-Ogi, hanging around the bridge every day and struggling his way through a Japanese phrase book so he can ask her out on a date (the dates, when they come, are like a travelogue of the most Japanese events you could imagine).

The languid lack of drive isn’t helped by Brando’s curious performance. Sayonara is the perfect example of what a mystifying actor Brando could be: here he was in a project that clearly meant a lot to him personally (he was a long-standing social campaigner), but he drifts through it with a lazy off-the-cuffness that suggests he’s only doing the film under protest. Only Brando could act in a passion project with such surly indifference (allegedly motivated by his lack of regard for Logan’s direction). Brando uses a non-descript Southern drawl, which he uses as an excuse to dial his mumbling up to 11. He slouches and ambles through every scene, barely raising his voice or lifting a finger unless it’s essential.

Because Brando seems so disengaged and bored by the whole thing (the only spark of energy he gives is when he playfully bangs his head on a low Japanese ceiling) it makes the film drag on without the stakes ever seeming to really mount. Ace is told repeatedly that he will have to chuck Hana-Ogi, but he shrugs it off with all the indifference of a laid-back hipster. I think Brando is straining to suggest that Ace has the soul of a poet, trapped inside his father-mandated time in West Point – there is a moment where he airily mumbles something about his dreams as a young man of finding something more. But the overall effect is more of an actor drifting through a long role with minimum effort.

You can’t say the same for Red Buttons, who plays Kelly with a great deal of commitment. Winning an Oscar, this first role was also his best, with Kelly having Button’s good-natured lightness but mixing it in with a fierce defiance and a touching pain when his wife suggests surgery to try and alter her facial features to appear more Western. Umeki also won a generous Oscar for a brief performance which gives her very little scope to do much beyond playing the quiet wife (I suspect the Oscar was partly for the film’s theme and reflects a weaker year of candidates). Miiko Taka is more impressive (and given more scope) as Hana-Ogi, all too aware of the pressures on her not to get involved, torn between her feelings and what she sees as her duty.

Sayonara as a whole though remains a flat, often rather uninvolving film that holds its liberal conscience so close to its chest that it manages to squeeze any trace of life out of it. Its liberalness only goes so far: Logan casts two Japanese actresses but has no concerns about recruiting a pale-faced Ricardo Montalban to play the only Japanese male with lines. It’s exploration of mixed-race relationships is solely focused on white guys marrying who they want. A truly daring film would have thrown in a flirtation between Montalban’s Japanese actor and Patricia Owen’s patrician General’s daughter. A Japanese man marrying the daughter of one of America’s own? Now that is a vision that would have really shook up 1950s America.

It’s not to be though. Instead, this is an overlong, overly serious, pleased with itself melodrama, coated in lashings of social awareness that is cursed with a languid central performance that helps make the whole film seem to drag on forever. Logan is unable to provide either any dramatic or political fire to the film and it settles all to often for safe, picture perfect shots of Japan. While you can admire the motives behind it, there is little to admire in the film itself.