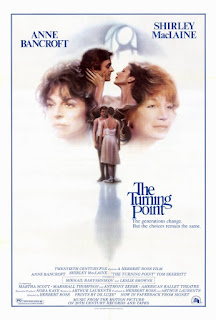 The demands of ballet are unlike any other artform there is. Complete physical and emotional commitment is needed to master it – so that means you got to make choices. The Turning Point is all about those choices. You might even call them ‘turning points’. DeeDee (Shirley MacLaine) and Emma (Anne Bancroft) were two young ballerinas who took radically different paths: DeeDee had a child with fellow dancer Wayne (Tom Skerritt) and left the profession behind; Emma remained with the company to become its prima ballerina. Now DeeDee’s teenage daughter Emilia (Leslie Browne) has joined the company: will she become the new prima ballerina? Or will she decide to focus on a relationship with playboy dancer Yuri (Mikhail Baryshnikov)? Will Emma and DeeDee resolve the tensions between them – and the conflict from their shared parental interest in Emilia?

The Turning Point was a big hit in 1977. That, and the fact that it was about (and featured a lot of) an artform as graceful as ballet seems to have convinced the Academy it merited a haul of eleven Oscar nominations. Come awards night, the film set a record for most unsuccessful nominations, converting none of them into Oscars. Perhaps that’s because, on closer inspection, The Turning Point is a fairly run-of-the-mill soap opera, that mixes in various clichés from backstage, traditional ‘women’s pictures’ and family drama to come up with a plotline that’s eventually very familiar.

For all its positioning as a female-led drama, it essentially boils down to the same old patterns that for decades such films have circled. Turns out women can’t have it all: you can have that successful career, but forever sacrifice the joy of being a mother or you can settle down and have the family but face a life of career unfulfillment. Twas ever thus, ‘tis one or t’other. Essentially the film boils down into a soapy drama about resentments and illicit backstage affairs and little more than that. It doesn’t even really double down on the fun this sort of set-up could provide, instead framing the whole thing as a very serious drama.

But then, the film was an autobiographical affair for those involved. Emma is based on Nora Kaye, who was married to the director Herbert Ross. DeeDee is based on Kaye’s childhood friend Isabel Mirrow Brown, who made the exact same choice as DeeDee, marrying a fellow dancer (just like Tom Skerritt’s character). Her daughter (and Kaye’s goddaughter) was Leslie Browne, who here plays a fictionalised version of herself based on her own experience of starting her ballet career. Characters based on Jerome Robbins, Lucia Chase and other leading figures from ballet and theatre appear. Only Mikhail Baryshnikov’s Yuri is purely fictional (although the character has more than few similarities with Baryshnikov himself, being a Soviet defector).

It does give an additional layer of interest to the film. Ross also mixes in a host of extended ballet sequences which showcase actual professional ballet dancers, with snippets from Swan Lake, Cinderella and The Nutcracker among others. The dancing is breath-takingly good. Not least from Baryshnikov and Browne, who are given multiple opportunities to showcase their skills. Baryshnikov in particular is at the height of his powers, a graceful artiste who moves with an astonishing finesse. Both landed Oscar nominations, one suspects largely on the basis of their dancing. 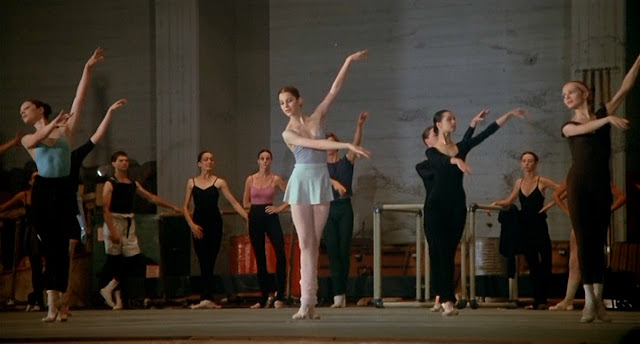 The acting is left to MacLaine and Bancroft as the leading ladies. There is something a little perverse that MacLaine, the former dancer, doesn’t so much as trot a step, while Bancroft (totally unexperienced) struts parts of Anna Karenina. However, the two actresses rip into these thinly written parts, giving them a lot more force than the film deserves. MacLaine balances motherly pride with bubbling feelings of something uncomfortably close to envy for her daughter’s success, spending time in New York trying to recapture some of her past (including a brief fling with Anthony Zerbe’s lecherous choreographer). Bancroft balances coming to terms with the end of her career as a ballerina with a growing regret that she has been left without a family. She becomes increasingly close to Emilia, mentoring her, dressing her and coaching her through a performance after relationship problems lead to Emilia getting roundly pissed in a bar before the show.

Needless to say, this unspoken squabble for ownership over Emilia – not helped by Emilia’s fury over her mother’s infidelity – only exacerbates tensions between the two women. It builds towards the film’s true climax (but unfortunately not its actual climax, as fifteen minutes remain for Emilia to be coached for her star-making performance) as the two women down drinks and exchange angry words and slaps, leading to a full blown cat fight outside the theatre. The fight later descends into cathartic giggling – and pity the two actresses who filmed it in ballroom dresses in what looks like a gale – but is acted with a great deal of attack by both, who bounce off each other (literally) hugely effectively.

But the scene is also a further confirmation that what we are really watching is a sort of high-brow family soap, that uses ballet as a backdrop for family feuds, scuffles, sexual escapades and tear-filled reunions. And it boils down to that struggle between career and family, the sort of struggle Bette Davis and Joan Crawford films were dealing with in the 1940s. Which is possibly another reason so many took to The Turning Point: even in 1977 it was an old-fashioned piece of entertainment, that did very little new.

That carries across to its whole execution: Ross competently directs the film (this was his annus mirabilis as he directed two Best Picture nominees, this and The Goodbye Girl) but really it gets all the force it has (and more than it perhaps deserves) from the two leads and a fine supporting cast (Tom Skerritt is very good as DeeDee’s laid-back, understanding father who perhaps masks secrets of his own). It’s a soap opera, solid but not spectacular, that really outside its showcase of ballet, doesn’t stand out from several other films of the same genre.