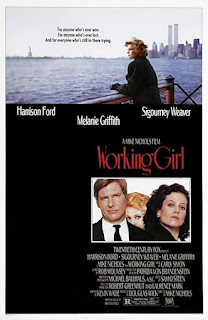 Is there a more 80s film in existence? It’s got the hair, the fashion, the attitudes, the Reagonite go-getting celebration of the guts and glory of Wall Street. Tess McGill (Melanie Griffith) looks and sounds like a dumb secretary, but she’s got the brains for business (but also, as she says, a bod for sin) – just never the opportunity to prove it. It looks like that might change under new boss Katherine Parker (Sigourney Weaver), who’s all smiles and talk of the sisterhood – but pinches Tess’ ideas and passes them off as her own. When Katherine is injured on a ski trip, Tess takes the chance to prove she’s got it by passing herself off as Katherine’s colleague and enlisting the help of mergers expert Jack Trainer (Harrison Ford) to put together a mega-bucks media merger. But what will happen when Katherine finds out?

Working Girl is really a great big Wall Street fairy tale, with Tess as the Cinderella invited to the ball only to have to run away leaving the business equivalent of her glass slipper behind. Katherine is a wicked stepmother, and Jack the handsome prince. It’s the sort of film where the heads of corporations are cuddly figures who place fair-play and honesty above making a buck and goodness, wins out in the end. Basically, it’s about as much a slice of business realism as Pretty Woman (this film could almost be a dress rehearsal for that).

Nichols directs the entire thing with confidence and pizzazz and draws some good performances from the actors, while keeping the entire thing light, frothy and entertaining. He had to fight tooth and nail to cast Melanie Griffith – but it was a worth winning as the role is perfect for her. Griffith always finds it hard to get good roles – her light, airy voice has condemned her to a string of airheads and bimbos – but here it’s perfect for a woman everyone assumes is dumb the second she opens her mouth. She’s even thinks of herself as not that bright, accepting her lot in life is settling for second best.

That’s personally and professionally. Her boyfriend, played with a wonderful smarm by Alec Baldwin, is a rat (she walks in to her flat to discover him mid-coitus – “This isn’t what it looks like!” he protests with an unabashed grin), who constantly reminds her that she’s punching above her weight dating him. Tess is at the bottom of an ocean of sexism on Wall Street: traders see her as little better than a perk, slapping her bum or stopping to stare at her behind when she walks past them. She barely avoids sexual assault from a coke-addled trader in the back of a limo (a piece of presciently perfect casting for Kevin Spacey). Her first boss (a puffed-up Oliver Platt) routinely humiliates her.

To be fair, the film makes clear that much of this is a woman’s lot in this poisonous world of Wall Street. Even her boss Katherine has to patiently remove groping hands from parts of her body, and wearily tells Tess that it doesn’t do to kick up a fuss when you never know who might become a vital contact in the future. Working Girl makes some pretty gentle points about workplace sexism – you can’t fail but notice Katherine and Tess are the only two women in the office who aren’t secretaries or HR people, and even Tess is pretending not to be – and the casual objectification of women.

Sadly, it blows a few of those points by still getting Griffith and Weaver to perform scenes in lingerie. Griffith even has a brief scene where she hoovers Weaver’s empty apartment topless. Sure, it’s a bit progressive on women’s rights in the workplace: but still, phroah, look at that.

Nichols gets one of his most relaxed and loose performances from Harrison Ford. Even if Ford at times looks a little abashed, working against such forceful performers as Griffith and Weaver (like a shy teenager in a school play), Nichols helps him feel light and funny without relying on the cool machismo that served him well as Indy or Han. Jack Trainer (such a Harrison Ford character name!), becomes giddy and playful under Tess’ influence and there is a sweet innocence about his courtship of her. It’s one of Ford’s funniest, most naturally instinctive performances.

Equally essential to the film’s success is Weaver, who plays up to perfection her glacial distance as a woman who is all smiles and “us, us, us” in person, but selfish looks and “me, me, me” in private. Weaver is very funny as a ruthless, amoral businesswoman masquerading as a campaigner for her sex and completely recognises that the role is essentially a wicked stepmother, pitching it just right between arch comedy and realism. She was Oscar-nominated, as was Griffith, and Joan Cusack who is triumphantly ditzy and warm as Tess’ best friend.

Working Girl pulls together all the tropes we expect. Tess is made up to look like the professional businesswoman she is aspiring to become, there is a neat bit of low-key farce as she passes off Katherine’s office for her own to Jack, a sweet bit of business chicanery as she Jack sneak into a wedding (the sort of thing that in real life would get you a restraining order) and it all leads into a “love and truth conquers all” resolution with a satisfying coda scene as Tess starts a new life. There is a lovely song by Carly Simon (over-used on the soundtrack – and fans should check out Michael Ball’s cover of it) and plenty of chuckles. It’s a fairy tale of New York.