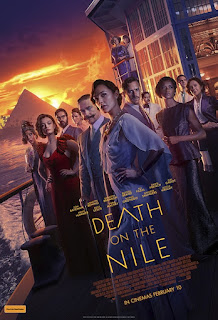 The tradition of luscious, all-star Agatha Christie adaptations continues. Following his successful 2017 Murder on the Orient Express, Branagh’s Poirot follow-up Death on the Nile finally makes it to the screen. I say finally, because this film has been sitting on a Covid-related shelf for so long that Branagh conceived, wrote, shot, edited, released and won awards for Belfast in the meantime. Death on the Nile is a much less personal film than that one, but is still an interesting (if flawed) re-imagining of Christie’s Belgian detective.

Linnet Ridgeway (Gal Gadot) and Simon Doyle (Armie Hammer) are getting married and honeymooning in Egypt. Problem is, six weeks earlier Simon was engaged to Linnet’s old friend Jacqueline de Belfort (Emma Mackey), who has not taken being jilted well and is stalking the couple throughout their honeymoon. Poirot (Kenneth Branagh) is invited to join the bash by old friend Bouc (Tom Bateman), one of a host of wedding guests on a private cruise down the Nile on luxury steamer The Karnak. But Jacqueline gatecrashes the cruise and murder strikes. With almost every passenger having a motive, will Poirot manage to unpick a case that becomes a painfully personal one?

Branagh’s Death on the Nile film has many of the same flaws and strengths of his previous Poirot epic. Shot on 70mm, it’s almost excessively beautiful. In fact, the film has such a chocolate box, Sunday-afternoon feel it frequently looks almost too perfect in its blisteringly blue skies and CGI Egyptian backdrop. It’s very clear that we’re expected to wallow as much in the costumes, sightseeing and 30s glamour as the mystery. In that way at least it’s pretty close to the 1978 Ustinov version.

Fortunately, the mystery is one of Christie’s finest and its execution is handled fairly deftly. The plot is pretty faithful, although most of the character traits of the passengers are reshuffled and reassigned to create interesting new set-ups. (For example, a rich kleptomaniac takes on instead the socialist passions of a secret nobleman who instead takes the medical qualifications of a third character. Elsewhere a character is split in two into Okonedo’s jazz singer and Bening’s rich amateur painter). The insertion of the Bouc character from Murder on the Orient Express carries across an relationship that the film richly develops to give the case a greater personal impact for Poirot.

But the film, like the first, is as much a Poirot-centric character study as it is a murder mystery. It’s easy to snigger at an opening sequence which, while handsomely done and including an impressively digitally de-aged Branagh, serves as a “moustache origins” story (Poirot grew it to hide his physical and emotional scars from WW1). But it’s a launching point for an interesting exploration of Poirot’s emotional hinterland and monk-like abstinence from attachment. A particularly rich opportunity, considering the murder’s roots are in exactly the sort of all-consuming love Poirot has denied himself. It also pays off in the film’s final sequence, with clear evidence that events have led to Poirot permanently re-evaluating and changing his character.

As in the previous film, Branagh plays this with a winning mix of comedy and larger-than-life prissiness but also manages to utilise his eyes very effectively to suggest the emotion and pain his Poirot keeps firmly under the surface. The later sections of the film see Branagh play a level of overt pain that we’ve not really seen other Poirots display in the past. Expanding the character still further beyond the focused, retentive, distanced detective of Christie’s original, this is also a Poirot who expresses shame, regret and (bashfully) a schoolboy-style crush.

Unfortunately, the rest of the cast is a more mixed bag – who would have thought Russell Brand would be not only one of the more restrained, but also one of the most quietly affecting? Tom Bateman is excellent as Bouc, full of joie de vivre and later wounded, pained innocence. Brit audiences can enjoy the joke of French and Saunders playing a pair of closeted ageing lesbians. Letitia Wright is fairly good as a headstrong young woman in love. Other members of the cast engage in a scenery chewing competition, roundly won by Sophie Okonedo as a rollingly accented blues singer with most of the best lines, while Bening and Fazal struggle to bring life to their characters.

For the principal love triangle, the film suffers under the unfortunate issue of Armie Hammer’s fall-from-grace (guess he’s never going to become that star I wrote once he was destined to become). Even without that, Hammer seems oddly constrained by his British accent and fails to bring any life or passion to the role, not helped by a complete lack of chemistry with Gal Gadot who seems hopelessly at sea, trapped in flat line readings and odd bits of business. Emma Mackey by far-and-away comes out best as a young woman dripping with danger and obsession.

It’s a shame Branagh’s film constantly seems to shoot itself in the foot. Must be easy to do, since the boat is awash with guns (everyone seems to have one!) – so much so the final reveal is bungled into a three-way Mexican stand-off that completely robs the book’s brilliant denouement of its impact. The whole film is a little like this at times: as a director Branagh can be a flashy show-off whose ambition isn’t always married with the sort of effortless grace great directors bring to cinema. So, the film is crammed with tricksy, attention-grabbing shots and loud, brash moments of drama that are as likely to raise sniggers as sighs of awe.

It’s a shame as, in many ways, this is actually a little better than Murder on the Orient Express. It’s tighter (even though it’s longer!) and it creates an emotional backstory for Poirot that not only feels much less forced but actually adds something to the original story. Many of the changes in the characters actually help to make something interesting and new. If only Branagh’s films could shake the idea that we need guns, fights and sweeping CGI to invest in a Poirot story. Because, despite some weaker performances, when the film focuses on emotion and story it’s actually a fairly engaging adaptation that, while never the best, is very far from the worst.