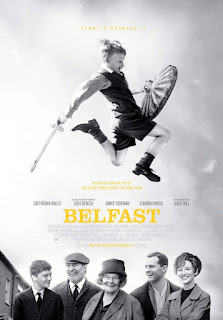 Directors making films about their childhood is a well-established sub-genre. Fellini got the ball rolling, a few years ago Alfonso Cuarón made his own black-and-white look at growing up in troubled political times in Roma and this year Pablo Sorrentino has released a film focused on his own teenage years in The Hand of God. Huge admirer of Kenneth Branagh as I am, I can’t deny he’s not a unique visionary in the vein of those filmmakers. But, Belfasthas a heartfelt, genuineness and a sweetness that verges just the right side of sentimentality and is a loving tribute not only to the city he grew up in but also to his parents, making it Branagh’s most personal project since In the Bleak Midwinter and possibly his finest non-Shakespeare film.

Branagh’s substitute is 9-year-old Buddy (Jude Hill), the child of a protestant family, living on a cross-community street in August 1969. His main concerns in life are friends, films, football and a classmate he has a crush on at school. But for his parents (Caitríona Balfe and Jamie Dornan), their worries are much more about the growing sectarian violence in the city. Pa has an offer of a job in England, which could bring them a new life. But it means the whole family leaving behind it everything it has ever known, including Buddy’s beloved grandparents (Judi Dench and Ciarán Hinds). As the city becomes more dangerous, what will the family decide to do?

If there is a memory piece Belfast reminds me of most, it’s John Boorman’s Hope and Glory. That film was true to Boorman’s memory, that growing up during the Blitz was also an exciting time, because as a child he never realised that death could be seconds away. It’s the same with Belfast. Branagh is keeps the film as much as possible from the child’s perspective. A child might be aware of the news playing on the TV, see the growing number of soldiers stopping and searching people on the streets and be wrapped up in riots, while never really understanding what exactly is going on.

The film has been unfairly attacked by some for not focusing on the accepted narratives of this era of Belfast’s history: misery, killing and brutality. What Belfast instead brings to the fore is the warm community. Streets where everyone knew your name, people sat outside their homes and chatted with neighbours, shared celebrations together and looked after each other. You can understand why it was such a wrench to leave this behind – even with soldiers patrolling the street. How scary it was for a person of any age – from Buddy to Ma, who has known nothing but Belfast her entire life – to even consider going to a place where no-one would know you and you would be an outsider.

Belfast is dedicated to those who stayed behind, those who left and all the lives who were lost. It’s a tribute to a community spirit and family, that has chimed with a great deal of people who lived in the city at the same time and place. The film is fundamentally hopeful because, under the violence and danger, it makes a plea – and demonstrates – that many people in Ireland just wanted to live their lives and didn’t care which church their neighbours went to. The opening few moments of the film is a snapshot of these halcyon days, kids from different communities playing together on the streets and their families gossiping and laughing together.

It’s shattered by the film’s first outburst of violence, as a Unionist gang attacks the street and hurl Molotov cocktails at the houses of Catholic residents – with Buddy, confused and terrified, caught in the middle and dragged into his house and safety by his frantic Ma. It’s a threat that will hang over the film for the rest of its runtime, embodied by Colin Morgan’s bullying enforcer, but only vaguely understood by Buddy – and considerably less important to him than whether he gets to sit next to the girl he has a crush on at school.

That crush is one of many things he gets advice on from his Grandad, played with a genuinely heart-warming twinkle by an Oscar-nominated Ciarán Hinds. Hinds is the picture of the perfect Grandad, wise, attentive, patient and full of homespun advice and wisdom – dialogue that Hinds brings to life with an expressive warmth. He’s paired to wonderful effect with Judi Dench (also Oscar-nominated) as Buddy’s Granny, who’s got a sharper tongue (and most of the funny lines) and has a cold-eyed realism about what it might be best for her son and his family. 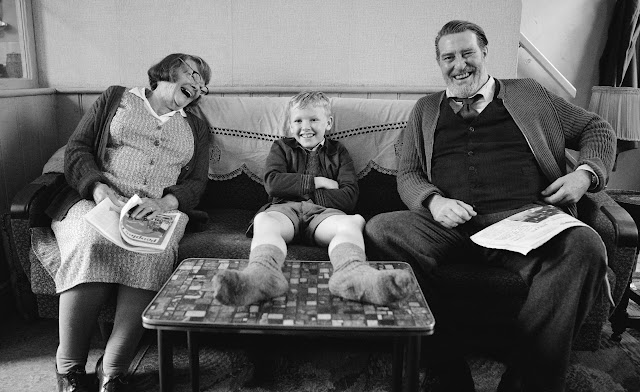 You could check yourself and ask if Branagh is idealising his memories. But I think this is partly the point of the film. At several moments there is a slight air, not so much of fantasy, but of a childhood’s perception and memory being restaged. Jamie Dornan’s hard-working, caring Dad is frequently shot by Branagh in a way reminiscent of the Western heroes in the film buddy watches (High Noon in particular). A late confrontation between Dornan and Morgan plays out like a child’s romanticised memory of how something might have played out – as does a sequence where Dornan and Balfe sing and dance to Everlasting Love. I think Branagh is asking us to consider this might not be exactly what happened, but a fantasy tinged, child’s idealised memory of an event.

And Branagh’s film – shot in a luscious black-and-white – is told with a sharply edited pace and economy. It frequently allows us to see the ‘true’ situation in the background or on the edge of Buddy’s perception. Ma – beautifully played by Caitríona Balfe as grounded, moral but vulnerable and scared – has genuine worries not only about the violence but also the couple’s financial situation. There is an argument, and a later sad half-ultimatum, between Ma and Pa that we understand but Buddy is only vaguely aware is happening. Branagh’s film is full of half moments like this, where he trusts we are intelligent enough to see exactly what the child is seeing and also see more.

Branagh also draws a superb performance from Jude Hill as Buddy. This is a kid who is wide-eyed, natural, unforced and gets the balance just right between sweetness and a childish selfishness and vulnerability. There are real moments of terror and distress for Buddy, which are immensely well-done, and Branagh proves again there are few better directors of actors out there.

In among this there are some lovely moments where we see Branagh’s passion for the arts and film-making take hold. These are shown in splashes of pure colour: from clips of Chitty Chitty Bang Bang which an enraptured Buddy watches in the cinema, to actors performing A Christmas Carol in the Belfast theatre appearing in perfect colour. That’s not to mention touches of everything from Westerns to Star Trek to a shot of Buddy reading a Thor comic-book (sadly no Shakespeare).

Belfast is above all warm-hearted and loving tribute from a son to his parents and the impossible decisions they needed to take to give him opportunities in life they never had. Branagh’s script is crammed with some wonderful lines and plenty of hard-earned sentiment and the cast play each of these moments to perfection. It’s a passion project that really communicates its passion and shows how love, family and hope are universal. Cynics will sneer, but it’s a lovely film.