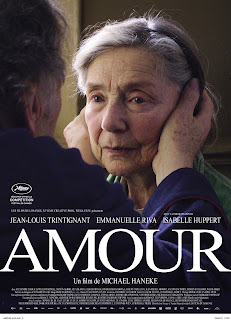 Think of Haneke, and you tend to a picture a rather cold philosopher, starring at humanity through a microscope. Some of his best works are chilling explorations of man’s capacity for inhumanity and cruelty. But Haneke’s work is based on a brilliant understanding of what makes people tick, and that insight applies as much to love as it does to cruelty. Amour is Haneke’s searching exploration of what love can be like, and how it can make us behave, in the worst situation possible: one where we are helpless to ease the suffering of someone we love.

Georges (Jean-Louis Trintignant) an Anne (Emmanuelle Riva) are retired piano teachers, married for almost forty years. The life is one of relaxing calm, enjoying the success of former pupils. All that changes when Anne has a silent stroke, the effects of which leave her paralysed on her left side. Georges resolves to care for her, dedicating himself to seeing to her every need, even as Anne’s body and mind (and desire to keep living) swiftly decline and a second stroke brings on even greater helplessness and dementia.

We know it won’t have a happy ending. It’s told in flashback, the film opening with the door to Georges and Anne’s apartment being broken down by the police, discovering Anne’s body laid out on the bed, surrounded by flowers. We know from the moment of Anne’s first stroke, where this story is heading. And none of it should be a surprise. Haneke based the story on an experience in his own family, where he was left helplessly watching a person he loved suffer, powerless to do anything other than offer brief comforts. Amour asks if there can be anything harder for to bear than being unable to help (or even, in the end, really communicate) with someone we love?

Georges devotion to Anne is clear. He obeys to the letter one of her first wishes when returning from the hospital: she does not wish to leave her home. So, they stay in their apartment (the film leaves this apartment only once, in our introduction to the leads) and Georges cuts up her food, helps her in and out of bed, fetches and carries and helps her get dressed. Steadily Anne’s ability to do things independently declines; and after her second stroke evaporates entirely. She’s incontinent (reliant on a nappy), delirious and incapable of coherent speech, unable to leave the bed and getting her to eat her mashed-up food and water is a daily struggle. Slowly, any trace of the real Anne only exists in Georges memories, which he clings to tightly.

In some ways, this is a horror film: the horror of powerlessness as someone literally wilts away in front of us, a new part of their personality disappearing every day. It frequently plays out in an austere silence – tellingly for two people whose whole life has been music, there is precious little of it in the film. The Anne at the film’s end – frightened, childlike, tempestuous and able to utter only a few words (like “Hurts”) over and over again in an incoherent refrain – bares no resemblance to the intelligent, witty and engaging woman at the film’s start. In every line of Trintignant’s face there is the weary, numbed pain of a man unable to do anything other than gently try to apply the brakes.

But it’s love that keeps him refusing to give-up, and the film is an exploration of the never-ending lengths we will go to for those who mean the most to us. Georges entire life becomes Anne – by the end there is a barely a waking hour that isn’t consumed with her needs. From the start, even the smallest tasks are challenging for Anne: we see her struggle to put on her glasses and turn the pages of a heavy book one-handed in bed. This only gets worse – and the loss of dignity a person feels as they become incapable of controlling any part of their body, including their bladder, is presented by Haneke with a horrific matter-of-factness. 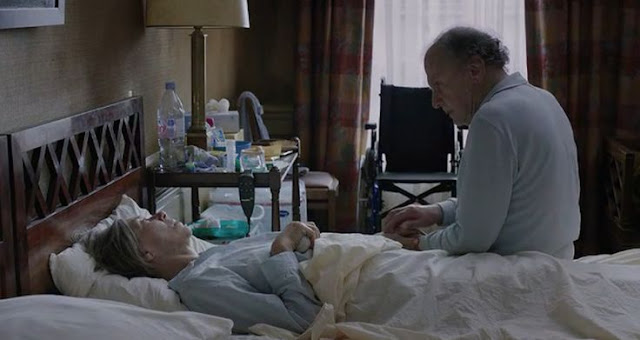 But, what I think is particularly interesting about Amour– and I think Haneke’s stroke of genius – is the flip side of love. Because it also makes us selfish: and you can argue it makes both Anne and Georges selfish. Georges, in particular, begins to horde Anne, as if he was so desperate to keep some vestige of his life with her alive, that he wants to keep her all to himself. He consistently turns down offers of help. He reacts with anger to their daughter Eva (a sensitive Isabella Huppert), telling her that he and Anne should be left to their own privacy. He takes a perverse pride of taking on an impossible burden and refuses to consider any suggestions to reduce his burden (with only great reluctance does he hire a day nurse). Love has made him greedy, to keep Anne to himself.

Part of this comes from his desire to preserve Anne’s dignity: he even locks Anne’s bedroom during one of Eva’s visits as he feels Anne wouldn’t want her daughter to see her like this. Georges dismisses one nurse as he feels she is mistreating Anne. This is fascinating scene: we see no evidence of this – all we see is the nurse showering Anne like a child and later combing her hair and showing Anne her reflection (and she’s furious at Georges accusation). The film suggests, perhaps what Georges can’t bear is the nurse’s infantilising of Anne in her dementia. It can’t be squared with his own desperate attempt to keep some of his memory of her unaffected by what she has become.

Anne knows early where this is going. When Georges returns early from a funeral, he finds her sitting outside an open window. Nothing is said in the following conversation, but it’s clear that Anne was in the midst of attempting suicide. Later she talks bitterly about the point of carrying on. In her later dementia state, she frequently refuses food and water as if determined to try and bring her own life to an end. It’s a cry Georges isn’t interested in hearing: he bolts it away in his mind and battles to the end to try and preserve what life she is, even once striking her with frustration after she spits out her food once again.

Amour can be seen as a pro-Euthanasia film. But I think it’s more complex than that. It’s about love, and how it can drive us to undertake super-human efforts for another person that are also, in a way, about ourselves. That’s what Georges does: a burden that damages his own health and well-being, which he takes on because he will not let go and whatever small parts of Anne are left, he doesn’t want to share with anyone else (not even their daughter). When he takes his fateful decision – and one we’ve been expecting from the film’s first frame – it’s as horrifying as anything Haneke has filmed, both on Georges’ despair and Anne’s instinctive terror.

Amour is blessed with two stunning performances. Emmanuelle Riva won a BAFTA and an Oscar-nomination for her superb performance, a technical masterclass combined with huge emotional depth as Anne moves through fear, anger, self-loathing and finally into a deep, dark well where her understanding of what is happening to her slowly fades away in a babble of incoherent words. Jean-Louis Trintignant, lured out of semi-retirement, is sensational: a shambling, devoted, cantankerous, heart-broken, stubborn man dealing with a profound, never-ending grief and loss.

Haneke films it with a stately calmness and leaves a myriad of possible interpretations open to the viewer. But above all, he invests the film with a humanity, warmth and compassion that will speak to anyone who has had a loved one succumb to the infirmity and fear of old age. Amour is deeply moving, profoundly insightful and achingly beautiful.