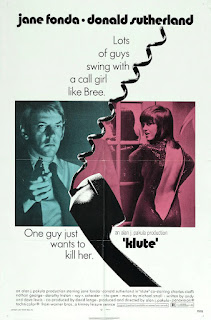 There is one question everyone asks when watching Klute: why the heck is it called Klute? Would calling the film Daniels have been too dull? Would Bree have made it sound like a history of cheese? Klute is dominated by its character study of Jane Fonda’s Bree Daniels, split between her desire to be an actress and the comforting sense of control and avoidance of intimacy her work as call-girl brings. Klute uses the conventions of the male detective movie to conduct a sympathetic, compassionate character examination of its female lead. Match that with Pakula discovering his affinity for creeping 70’s paranoia, and you’ve got one of the most interesting and rewarding films of the decade.

John Klute (Donald Sutherland) is a small-town cop called in as a private investigator after a six month New York police investigation fails to find his friend, businessman Tom Gruneman. The only lead they have is a series of obscene letters found in Gruneman’s office written to New York call girl Bree Daniels (Jane Fonda). Klute discovers Bree has no memory of Gruneman, but Klute believes she may be in serious danger. Together they investigate the crime further, which becomes more and more focused on a mysterious abusive client and even more complicated by the growing relationship between the quiet, reserved Klute and the strong-willed, independent Bree.

Klute uses the conventions of a gumshoe detective movie, spliced with a hard-hitting 70s fascination with grimy, sensationalist crimes (this was the same year as hard-bitten, shades-of-grey cops in Dirty Harry took on a serial killer and The French Connection explored the drugs trade), in this case the assault and murder of prostitutes. But this isn’t a whodunnit, or even really a detective story. The film is barely 45 minutes old before Pakula basically reveals who the killer is (the suspect list has only two people on it in any case). Most of the investigation takes place off screen. Some answers are kept vague. There is no cathartic moment of success.

Instead, the film feels far more like it’s using its Laura-ish set-up (the big difference here being the taciturn detective’s love interest is alive rather than just a painting) as a backdrop to deep dive in Bree’s personality. Bree is played with a stunning (and Oscar-winning) verisimilitude by Jane Fonda. Fonda immersed herself totally in the character, even living in the apartment set during shooting (Pakula had a working toilet installed) and developing a careful psychological background to Bree that is brilliantly introduced through our frequent cuts to her sessions with a coolly professional psychiatrist.

This is a portrait of a female sex worker on screen, where she’s neither a tragic or pathetic figure, or a hooker-with-a-heart-of-gold (the standard tropes). Instead, this is a woman struggling with a crippling fear of intimacy and a compulsion to control, who finds a freedom and release in acting out the fantasies of others. Bree speaks to her psychiatrist of being a call girl not as a curse or source of shame, but something she takes a sort of freedom from. It’s clear that really makes her sweat is not adjusting herself to whatever men want (faking an orgasm while checking her watch with one John, or acting out an elaborate, detailed fantasy for a lonely tailor) but the idea of having to be herself, to display something emotional and true.

And prostitution has the advantage over acting as she sets the terms. We are introduced to Bree as just one in a row of sitting actresses auditioning for an advert, each of them dismissively given a score from A to C. She later auditions for Shaw’s Saint Joan with a detailed, heartfelt reading (she’s clearly a good actress) which is stopped mid-speech by a bored director. With Fonda making clear that control is vital to Bree’s sense of well-being, no wonder she struggles with this dismissive world. Or that she finds a greater freedom in high-end prostitution, where we see she sets the terms with a business-like professionalism and is the centre of the focus and attention of her John’s for the whole of their session. This is a feeling she doesn’t get from anyone else.

What really scares her is the thought of a genuine emotional intimacy with Klute. In their first encounters she assumes she can seduce him with the professional ease she does most men, dropping naturally into her role of seductive dream-girl, offering him sex in return for recordings he has of her from his investigation. Later she will prove a point by coming to him in the night and seducing him with a pretence of vulnerability and fear, as if to prove to him (and herself) that she can work out exactly what mood she needs to control any man. 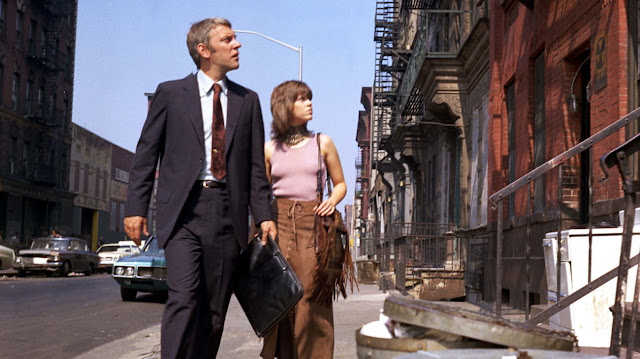 But it’s buried in genuine fear about emotional attachment. To her psychiatrist she talks about not understanding why Klute seems, with no ulterior motive, to be concerned for her safety and well-being despite the things he’s knows about her or that she’s done and said to him.

There is a marvellous scene where the two of them go shopping for fruit (Klute of course knows exactly how to choose the best fruit, he’s that sort of guy). First, she impulsively steals an apple like a naughty, impulsive child. When Klute responds with a bemused half-shock, she stands behind him, a grin spreading across her face, then she lightly rests her head (almost not touching) on his back – then follows him down the street, holding the end of his coat. It speaks worlds of how something in her emotional growth has been slightly stunted somewhere along the line. And the fact this intimacy is followed in the next scene by a drug-fuelled blow-out, speaks volumes of her fear of it.

It’s a brilliant performance by Fonda, throbbing with empathy and emotional complexity. She’s perfectly abetted by Donald Sutherland, who proves himself once again one of the most generous actors in the game. Klute is in many ways the typical rube in the big city, the one honest cop. But he also has a wet-eyed vulnerability, a tenderness and an urge to protect that as motherly as it masculine. He reveals very little emotionally, not from fear but from a shyness.

He’s also an observer. And Pakula’s film partly draws links between detective and voyeurism. Let’s not forget Klute also bugs Bree’s phone and follows her. The camera frequently shoots the action from distance, through windows and looking down on the action: the idea of being constantly observed lingers over the picture, giving it a rich vein of paranoia. The killer listens to disembodied audio recordings of Bree, and these frequently play over the action not only echoing this paranoia, but re-enforcing how her personality is a fractured one between the independent exterior and the less certain interior.

Pakula’s film pulls all this together into something creepy and unsettling but is also a fascinating character study. That is perhaps its best trick. You come into it expecting a film noir or a detective story. What you get is a compelling analysis of the psyche of one woman, who emerges into the picture and takes complete control of it. Perhaps that’s why it’s called Klute – it’s as much a part of the misdirection as everything else. With its psychological complexity and creeping sense of being watched, this would set the tone for many other films that followed in the 70s.