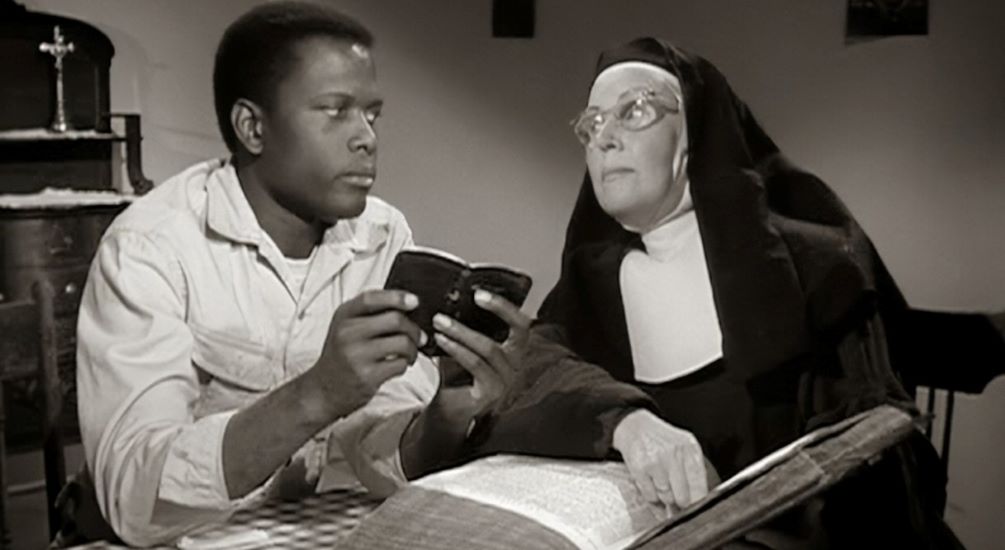 Nuns and a drifter find mutual respect (eventually) in this quaint, gentle drama 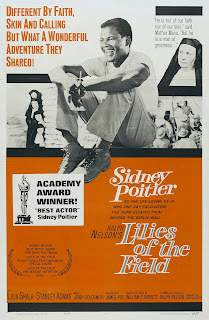 One day Homer Smith (Sidney Poitier) stops at a small Arizona farm to ask for water for his car. The farm is run by refugee Eastern European Nuns. Homer does a few repair jobs, teaches them a little bit of English and stays for dinner, assuming he’ll be paid in the morning. But the fearsome Mother Maria (Lilia Skala) tells Smith (or Schmidt as they call him) his presence is a gift from God and recruits him to build them a chapel, in return for food and lodging (but not money). Smith finds himself accepting – and, as the building work begins, finds a passion for the project building in him. Amen!

A humble “nice” film, based on a successful novel, Liles of the Field was shot in about two weeks by Nelson – who got the financial backing when Poitier agreed to play the lead. It went on to scoop a Best Picture nomination at the Oscars and a Best Actor Award for Sidney Poitier. To be honest there isn’t really anything in Lilies of the Field that you won’t see a hundred times before or since. Shot with an efficient (if Televisual) low-keyness by Ralph Nelson, it’s an inspiring tale about inspiring folks with a few laughs and smiles, set in a world that shows what we could achieve if mutual respect and decency were mankind’s watch-words.

Lilies of the Field is decisively a spiritual, feel-good film but it’s pleasantly told without any over-emphasis or lecturing, which allows it to remain a charming, engaging (if slight) watch. The story of the building of this small chapel in the middle of nowhere is as inspiring as seeing how a passion for the project gives Smith a focus and purpose he perhaps has lacked elsewhere in his life. But it’s also crammed with some charmingly loose scenes, such as Poitier playfully teaching the Nuns basic English phrases (far more useful than the ridiculous – and useless for everyday life – phrases the Nuns are learning from a record) and, later, the fundamentals of Gospel music.

Roughly in the centre is a rather sweet and well-drawn gentle struggle of wills between Homer Smith (an honest guy who expects an honest wage for an honest day’s work) and Mother Maria (a woman who has learned that you don’t get without asking again and again and again). These two feud using bible quotes (rather wittily, Mother Maria uses a massive embossed tone while Homer uses a well-thumbed pocket copy), butt heads on Mother Maria’s refusal to accept anything less than Smith agreeing to do the work gratis and Smith’s frustration at what he sees as her dictatorial stance. But, inevitably, respect grows between them over time (as it does in movies like this).

You could pretty much predict most of the beats in Lilies of the Field. Of course, the whole desert community rallies around to help. Of course, Smith and Nuns reach an understanding of mutual affection. Of course, the building contractor Smith works for part-time to keep himself in dollars (played by the director Ralph Nelson) overcomes his condescension to Smith to chip in. Of course, Smith falls in love with the chapel – and sees it as a chance to live his dream of becoming an architect. None of this should surprise you.

But it works because it’s all quite gentle and charming. A big part of this is down to Poitier’s performance. So many of his roles dripped with nobility and grandeur, that it’s really pleasant to see him cut loose and have some fun. This is surely one of the most relaxed performance Poitier ever gave, his Homer Smith loose-limbed, witty and relaxed, enjoying the comic banter and gracefully breaking into (dubbed) gospel singing. He has a natural and easy chemistry with the other actors – most of all Lilia Skala (also Oscar nominated) who is perfectly dry and starchy as Mother Maria – and keeps the whole enterprise just the right side of light and breezy. It’s Poitier getting a light, personality part very different from the roles he’s more associated with. He became the first black man to win an Oscar – and only the second person of colour after Hattie McDaniel.

The film has a few beats of racial tension: Nelson’s contactor condescendingly calls Smith “Boy” (much to his quiet anger) and there are references to prejudice. But what the film wants to celebrate is people coming together – which is what Smith, the Nuns and the (mostly) Latin American community do to winning effect. It does this with such honesty and simple pleasure that, for all its predictability and lack of narrative invention, it’s rather winning. It’s a simple, almost forgettable, little film – but when watching it you’ll at least feel heart warmed.