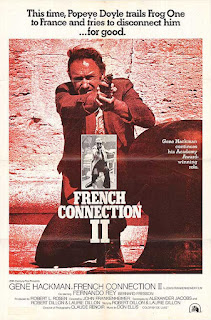 Did The French Connection really need a sequel? Friedkin’s original was a self-contained gem, based on a true story, that even ends with a series of “what happened next” captions. But there was enough of a foot in the door for a completely fictionalised resolution to fates left hanging. French Connection II has some similarities with the original, but it’s also a slight film caught even more obviously than the first between documentary realism and trigger-happy actioner.

The whole film feels like it has been assembled in a rush. The plot is incredibly slight. “Popeye” Doyle (Gene Hackman) arrives in Marseilles to help the police track drug kingpin Alain Charnier (Fernando Rey). Doyle doesn’t speak a word of French and charges around pissing everyone off and generally making a nuisance of himself. He’s grabbed off the streets by Charnier’s men. To get him to talk they spend weeks force-feeding him heroin until he’s hooked then cut off his supply. They then return him to the Marseilles police who lock him in a cell and help him go cold turkey. When he comes out if Popeye wasn’t mad before, he certainly is now.

That (long) sequence of heroin addiction and painful cold turkey is one of two things that really makes Frankenheimer’s sequel stand out. I think it must be what attracted Hackman to the film. Not only did the liberal Hackman (troubled by Doyle’s slight neo-fascism in the first film) probably enjoy the idea of seeing this guy hit rock bottom, it’s also an opportunity for an acting tour-de-force. Hackman is probably given more challenging material in this largely forgotten sequel than in his actual Oscar-winning role.

Weaned onto the drugs, Hackman’s body language shifts from defiant resistance to despondent, dope-strewn lethargy until he can’t be bothered to record the passing of days any more in his tally chart. He goes from being cuffed and dragged around, to blankly following his captors and rolling up his sleeve to accept another shot. But that’s nothing compared to the cold turkey scenes.

Locked up in a dingy cell under the police station (the French police worried about taking the blame and also feeling a brotherhood with this fellow cop), Doyle goes through withdrawal mourning – anger, bargaining and eventual grief – in a series of calmly shot, claustrophobic scenes that allows Hackman let rip. And he certainly does, deconstructing this proud man’s self-image until he’s a weeping mess, kicking doors, throwing food around and so full of self-loathing, he can barely face himself in the mirror. It’s hard to watch, and something truly unique – a twisted punishment for a drugs cop and a man who defines himself by his lack of reliance for anyone or anything else.

This long sequence takes up the centre of the film – and includes an equally difficult scene to watch, as Frankenheimer stages in (a single take) forensic detail the French police’s pumping of Doyle’s stomach to get a final (deadly) overdose out of his system. It’s quite unlike anything else I’ve seen before in a cops and robbers shoot-em-up (which is what most of the rest of the film, at heart, is) and you can guarantee it’s the one thing people will remember.

The other element that stands out is Frankenheimer’s – a long time Francophile – ability to shoot Marseilles not as a tourist destination, but a strikingly real urban environment. On top of this anti-picture-postcard environment, he stresses Doyle’s isolation. None of the French dialogue in the film is translated, leaving us as stranded as Doyle is in trying to understand what is going on and what people are saying. Doyle clumsily pantomimes for everything he wants, be that information from a suspect (he tries his toe-picking line to no effect what-so-ever) to a drink in a bar (a long exchange until he finally reaches an understanding with the barman on “whiskey”). Doyle, of course, has made no effort to learn any French and blunders about in a city he doesn’t understand, ruining operations and getting himself and others in trouble.

Aside from these moments though – and despite the film being well shot by Frankenheimer, with a nice continuation of the original’s drained out neo-realism – this is otherwise a conventional and unimaginative film that ticks a number of expected boxes. It has an action set-piece at a dry dock that feels unreal (and also copies the central idea of the car smuggling operation from the first film) and concludes in a chase and shoot-out that’s almost a copy of the original’s ending – with an ending even more sudden. For all Frankenheimer’s love of France, the film still has a suspicion for Europeans – be they smooth criminals or obstructive cops.

French Connection II tries a couple of different things, but never really makes a case for itself as a truly stand-alone film. It’s main rivalry between the hero and villain is dependent on having seen the first film and its slender plot veers into the sort of shoot-outs and set-pieces that don’t feel remotely like they are occurring in a ‘real’ world. It deserves credit for the bravery and honesty of its cold turkey sequence, but it’s a sequence caught in a film that otherwise offers little that’s truly unique.