Sparks fly in this straight-forward sitcom set up from James L. Brooks 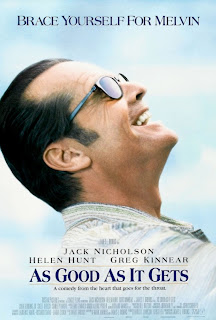 Melvin Udall (Jack Nicholson) is the rude, misanthropic writer of Mills and Boon style novels who suffers from an OCD that sees him keep to a strict series of routines. One of the most important is always having breakfast at the same table of the same restaurant, where the only waitress who will serve him is Carol Connelly (Helen Hunt). Carol is caring for her young son Spencer, who suffers from chronic asthma. All starts to change when the homophobic Melvin is persuaded to look after the dog of his neighbour, gay artist Simon Bishop (Greg Kinnear), after he is assaulted during a robbery. Melvin finds himself getting closer to the dog – and before he knows it, starts to reluctantly build a friendship with Simon and a romantic relationship with Carol.

If you thought that sounds rather like the set-up for a sitcom… you’d basically be right. James L Brooks demonstrates his TV roots again with what could almost be an extended pilot for a TV series, shot with his characteristic functionality. While its an attempt to show how different people can struggle to overcome barriers to connect with each other – be those psychological, social or health – it squeezes this into a trope-filled plot set-up, that swims in sentimentality and gives opportunities for actors to enjoy scenery-chewing, attention-grabbing parts.

None more so than Jack Nicholson, winning his third Oscar as Melvin. To be honest, what Nicholson does he is essentially portray a less complex version of Victor Meldrew from One Foot in the Grave. Melvin is a man who doesn’t suffer fools gladly, and delights in using his wealth to excuse him from saying a host of unacceptable things about everyone he meets (not a single gender, sexuality or race escapes his quick-witted bile).

Of course, the audiences know that it’s alright because it’s Jack, and while he might be a rogue he’s basically got his heart in the right place. Discovering that is basically the purpose of the film: of course, all that rudeness and cruelty is a front to protect an insecure man from the dangers of emotional commitment. Not to mention that the first thing to melt his shell is that most familiar (and sweet) of Hollywood props, a dog. Brooks does manage to demonstrate that Jack’s acts of kindness are at first partly about making life easy for himself – securing an expensive doctor for Carol’s son is about ensuring she doesn’t leave his restaurant and agrees to keep talking to him – but the film is determined to show everyone is basically “decent” and “kind” even if they don’t know it.

Inevitably, the best way of doing this is for that familiar old development, the road trip: for contrived reasons connected to Simon needing to ask his parents in Baltimore for help with medical bills, Melvin, Carol and Simon climb into a car for a cross-country drive. Needless to say, the predictable clashes, confessions, break-ups and reconciliations take place. It being a Brooks movie, this all takes place over an extended two and a half hour run time (indulgent for such a traditional set-up).

What makes it work is that the acting of the three principles is fiercely committed. Oscar-winning Nicholson eats up the cutting dialogue but also manages to mine a lot of “little boy lost” vulnerability from Melvin, a man who throws up barriers of rudeness, aggression and misanthropy to protect himself from getting hurt. Helen Hunt (who won another Oscar) hones years of experience in delivering fast-paced, witty dialogue from Mad About You, also shows real depth making Carol a similarly guarded person, using sass and cynicism as a shield against a world she expects to bite her. Greg Kinnear is a fragile artist, hiding behind his art, tortured by denial about his problems and desperate for an emotional connection.

That theme of the defensive barriers – and crippling effects of our own mental hang-ups – is the deeper message that Brooks manages to bring to the film. Melvin might seem, on the surface, the most obviously maladjusted but at least he’s vaguely happy in his skin at the start of the film. The other characters wear smiles of contentment, but only to hide deep stress and turmoil. It’s Brooks’ TV roots that turns all this into a series of “learning” lessons, where every scene in the final act is accompanied by someone making a profound choice, making a new start or letting something go.

As Good As It Gets is about making the best of things. And Brooks makes a pretty good fist of making this a decent (overlong) romantic comedy with a touch of depth. But its still mired in predictable tropes. Melvin’s OCD expresses itself in the most amusing filmic way possible, essentially as a form of charming eccentricity rather than the crippling disease it can actually be (it ticks all the predictable boxes, from light-switches, to compulsive hand cleaning to not stepping on cracks in the pavement). The film also, rather worryingly, suggests OCD can be overcome just like any other personality problem, simply by opening your heart and learning those lessons.

It’s fine, but you can watch it now and wonder how a film that’s essentially an over-extended dramedy TV-show pilot ended up scooping so many prizes. Entertaining, with some interesting perspectives, with committed acting, but very little that’s new and a lot that’s rather tired.