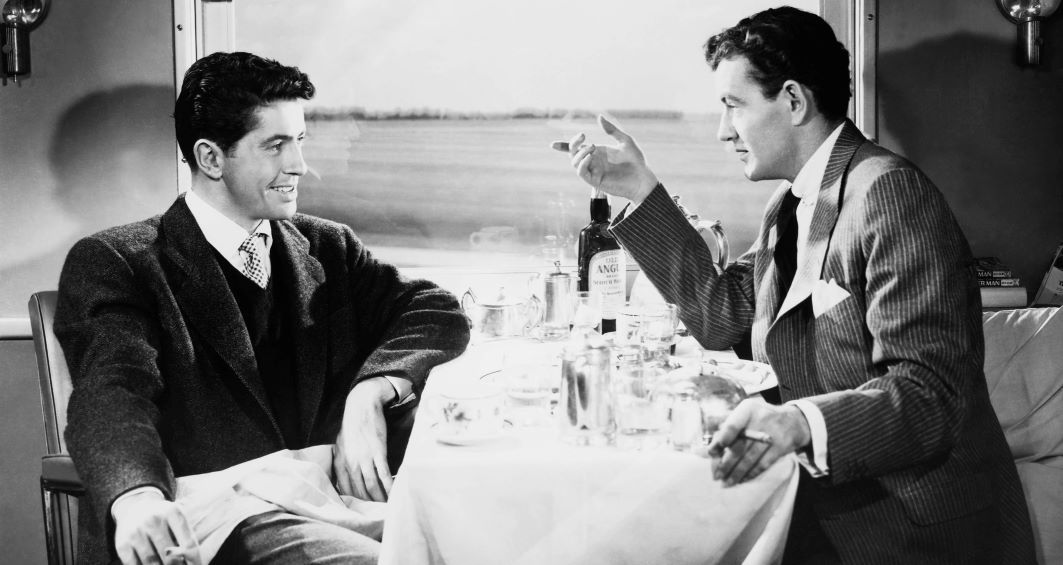 A man accidentally agrees to a murderous exchange in Hitchcock’s tense, seductive thriller

Two men meet on a train: Tennis star Guy Haines (Farley Granger) and entitled playboy Bruno Antony (Robert Walker). They chat awkwardly, possibly because Guy is too polite to tell Bruno to sod off and leave him alone. They both have problems: Guy can’t marry his girlfriend, Senator’s daughter Anne Morton (Ruth Roman) because his trampy wife Miriam (Kasey Rogers) won’t give him a divorce; Bruno longs to escape from the shadow of his controlling dad. Then Bruno makes a suggestion: he’ll dispatch Miriam and Guy can kill his father. No-one will suspect a thing, as neither man has a motive. Criss Cross. Guy shakes hands and forgets all about it: until Bruno murders his wife and demands quid pro quo.

Hitchcock’s dread was to be arrested for a crime he did not commit. As a young boy, his father sent him down to the local police station with a note instructing him to locked up for a few hours to teach him a lesson. The horror stayed with Hitchcock for his whole life. Strangers on a Train was one of his best explorations of this concept (with the twist that the hero secretly wanted to but wouldn’t of course), and desperately attempts to prove his innocence and stop the psychopath he’s accidentally commissioned.

It’s a dream of a concept from Patricia Highsmith’s novel, superbly assembled into a tense thriller, where questions of whodunnit are (as so often in Hitchcock) irrelevant, with the real suspense coming from how the hero is going to get himself out of his predicament. That horrific predicament is masterfully assembled by Hitchcock into a series of striking set-pieces and shots, all of which carefully build a sense of being trapped in a terrible, oppressive nightmare as Guy realises there is no escape from the expectant glare of Bruno, determined that he fulfil his side of the bargain.

Bruno haunts Guy like a phantom. Guy sees him standing in front of an empty Lincoln memorial, Hitchcock shooting Walker like a distant black smear on the pristine white background. At a tennis match, Bruno sits fixedly starring at Guy, while every other face moves from side to side around him. Bruno inveigles his way into the home of Guy’s would-be fiancée and cheerfully sends him instructions on the best time and method for dispatching his father. The world seems to close around Guy – he’s framed through grills, trapped in rooms, never in control of his own destiny.

Bruno is relentless in his pursuit – and that feels like the right word for it – of Guy. It’s a superb performance from Robert Walker as this sexually ambiguous psychopath, chillingly amoral, fixated on his own desires and unrelenting in his sinister obsessions. Walker’s charisma and slimy, insinuating charm dominate the movie – he’s bizarrely sympathetic, so honest is he in his carefree sociopathy – and makes a great contrast with Granger. Here Hitchcock used the weakness of an actor to splendid effect. Original choice William Holden would never have been so meek and awkward talking with Bruno on a train: Granger, a less strong performer, utterly convinces as someone so inept at removing himself from an unwanted conversation he accidentally commits to murder.

The meeting between the two men on the train drips with homoerotic tension. It plays pretty much like a pick-up, Bruno smoothly working his way from sitting opposite Guy, to sitting next to him, to sharing dinner with him. Hitchcock introduces the two of them with tracking shots of their very differently shoed feet walking to a train, until they accidentally touch feet. Later a lounging Bruno stretches out his feet to touch Guy’s once more. Bruno essentially seduces Guy, Guy’s flustered awkwardness at least as much connected to a sort of sexual confusion as it is to the strange social interaction. Walker’s performance has a seductive purr and a beautiful delicate, feminine precision.

And it culminates in an intimate killing by strangulation. Hitchcock uses a virtuoso shot: we watch the killing of Miriam reflected in the lens of her fallen oversized glasses, Bruno bearing down over her until she disappears. The perverse sexual excitement Bruno feels over the killing creeps into his fascination with Anne’s sister Barbara (played, for extra perverse points, by Hitchcock’s daughter Patricia) who wears similar glasses to Miriam. Bruno stares at her with dreadful, tingling excitement and eventually loses control of himself miming out strangulation on a guest at the Morton’s house, swept up in the thrill of it.

Of course, Guy is far too straight-laced (in every sense) to get to wrapped up in Bruno’s plot. (Rather different from Highsmith, where his equivalent character regretfully but willingly upholds his part of the bargain.) The film overplays its hand slightly as it heads into the denouement with an overextended tennis match intercut with Bruno attempting to retrieve Guy’s lighter from a drain (where he has dropped it, en route to planting it at the murder scene). It pulls it back though with a final fight on a wildly speeding-out-of-control carousel (just the right side of ridiculous).

The film is littered with little references to doubles and dark shadows and is a superbly constructed thrill ride by Hitchcock. Granger’s weaknesses as a performer are surprisingly well suited to his role, although Hitchcock failed to hide his lack of regard for Ruth Roman in a weakly written role. The film gets a superb dark momentum from Robert Walker’s marvellous performance and Hitchcock shoots it with a brilliantly unsettling stalkerish eye, with Bruno’s trailing of each of his targets tinged with a dark sexuality beneath the malicious intent. With good reason, Hitchcock called this his “first American movie” and it kickstarted a run of hits.