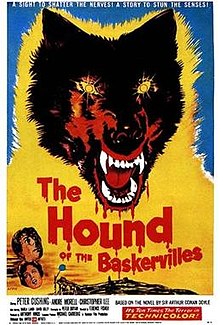 Arthur Conan Doyle’s most famous story hardly needs introduction. In 1959 it was told with a Hammer Horror twist. With its demonic dog, fog covered moor and blood-laden backstory surely no Sherlock Holmes story could be better suited to the studio. The film is fairly faithful to the basic outline of the original, although with added tarantulas and (more controversially) a new villain.

But it all works pretty much a treat, largely due to the performances of Cushing and Morell as Holmes and Watson. Cushing’s Holmes is sharp, analytical, has bursts of energy mixed with impatient distraction. Cushing went back to the stories and threw in many small details – from lines from Doyle to physical moments such as securing notes to the mantelpiece with a knife. His Holmes also uses rudeness in a Doylesque way he rarely does in film. Cushing has the intelligence and dynamism of the Detective – he’s one of the more overlooked actors to play the role – and had been determined to be faithful in his interpretation (sadly sequels were not forthcoming, although Cushing played the role several more times on the BBC).

Morell also returned to the novels to present a Dr Watson who was smooth, professional, assured and competent if uninspired. It’s was a far cry from the blundering buffoon which – thanks to Nigel Bruce – the public expected from Holmes’ faithful Boswell. Morell’s more patrician style made him a fine contrast with Cushing’s bohemian tinged Holmes. The two actors also spark beautifully off each other and create a feeling of a genuine friendship, underpinned by affection and loyalty, frequently showing genuine concern for each other’s safety.

Aside from these two excellent performances in the leads, the film is a solid if not spectacular adaptation, competently filmed. Terence Fisher’s direction sometimes struggles to cover the cheapness of the enterprise and some sets convince more than others. For a film that is quite short, the pace sometimes slackens (the Baskerville legend in particular gets far too much screen time, probably connected in part to the presence of the buxom servant girl Sir Hugo is planning to bed). Moments such as an attempt to assassinate Sir Henry via tarantula in London (which makes no sense at all) provides decent moments of tension but are basically filler.

The film does manage to address some of the problems of the novel by introducing a greater sense of mystery, in particular by providing motivations for several characters. Saying that, just as in the novel (where the mystery is solved by Holmes travelling to Scotland and reading some records – not good drama), here much of the mystery is resolved by Holmes carrying out an off-stage conversation with convict Seldon. Much as in the book, Holmes travelling to the area incognito doesn’t really add much to the story other than providing a late reveal.

Better invention however comes in the introduce of a femme fatale in Marla Landi’s Cecile Stapleton, here re-imagined as a sexy, wild girl of undefined (and nonsensical) European origin. She sparks off a neat chemistry with Christopher Lee’s Sir Henry – here playing for the only time in his career not the villain but the romantic lead! – and her development late in the film presents a fresh take on the resolution.

It’s certainly a little more fresh than the eventual scuffle with the dog – which to be honest doesn’t look either that intimidating or convincing. The dog itself is rather underwhelming, and more threat is actually conveyed by the moor itself, a mysterious stretch of land coated in fog covering treacherous bogs.

What Fisher and Hammer do really well is atmosphere, and the gothic feel of the piece is pretty much spot on. There is the expected claret red blood – and a suggestion of something really grotesque which befalls a victim on the moor – mixed in with sexy ladies. It’s an exploitation twist on Holmes, but then the novel itself was basically pretty much a B-movie in text. And the fundamental story is largely unchanged, with both the virtues and vices of the book captured.

The finest thing about it is the acting. Several scene-stealing actors chuck in neat cameos. Le Mesurier is perfect as the reserved butler Barrymore. De Wolff is a sharp and arrogant Mortimer. Malleson steals his scenes as an absent-minded Frankland (here re-imagined as an eccentric cleric). Christopher Lee relishes the chance to play against type, making Sir Henry a pillar of upright, honest decency. But the real delight is Cushing and Morell as Holmes and Watson, a brilliant combination.