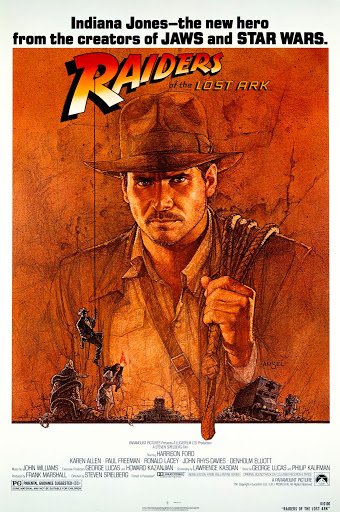 Indiana Jones is now one of the most beloved – and instantly recognisable – film characters ever created. So, it’s strange to think that Raiders of the Lost Ark was released to such little fanfare. That soon changed when the film came out. In some cinemas it was so popular it played for the whole year. It became a box-office smash, turned Harrison Ford into Hollywood’s leading movie star for the next 20 years, and made Steven Spielberg Hollywood’s leading director. And it did all that because I’m not sure there is a more entertaining, tightly made, funny, thrilling and (at times) scary adventure film out there. Spielberg and producer George Lucas may have wanted to make a film that aped B-movie adventure serials – but they ended up reinventing an entire genre.

It’s 1936 and the Nazis are in search of occult relics. Their latest target is the Ark of the Covenant, which Hitler believes will make his armies invincible. What chance is there of stopping him finding it? Well obviously the US government must put its trust in Professor Indiana Jones (Harrison Ford), one of the world’s leading archaeologists who also (fortunately) is pretty handy in a fight. Not only that, but his ex-girlfriend Marian Ravenwood (Karen Allen), daughter of his former mentor, holds one of the keys to finding the Ark. Indy and Marian end up on an adventure that crosses continents, taking on the ruthless Nazis and mixing with profound mysteries that man is not meant to know.

Hollywood wasn’t happy about Spielberg making the film. His previous film – the war comedy 1941 – had bombed, losing millions. The studio was insistent with producer George Lucas: if he wanted to see his dream of making an old-fashioned B-movie with his friend Spielberg come true, then he would need to stick tightly to a budget. After all, Spielberg had a reputation for delivering films overtime and overbudget. Our heroes stuck to this deal – and Spielberg has said it was a blessing, as it forced him to keep the film lean, tight and, above all, free of indulgence. Spielberg’s direction is perfect, so good in fact that he set the template for nearly all big-budget directing (in terms of tone, pace, mood and tempo) to come. Every action film since owes something in its DNA to Raiders.

Raiders is far more entertaining – and brilliant – than it has any right to be. It’s effectively a series of set-pieces, threaded together by screenwriter Lawrence Kasdan into a plot. Kasdan’s dialogue though was spot-on – like the film, lean, tight and perfectly focused. With exceptional brevity and focus it brilliantly creates a small core of characters, and then gives them room to bounce off each other. Its dialogue is quotable, fun and punchy. He – with Lucas and Spielberg – also crafts a central character who is flawed but deeply likeable, and a heroine who is independent and dynamic. The script is a big part of the reason why the film is a success – it makes us care deeply for the characters as they get involved in the death-defying stunts and action set pieces that make up a lot of the film. 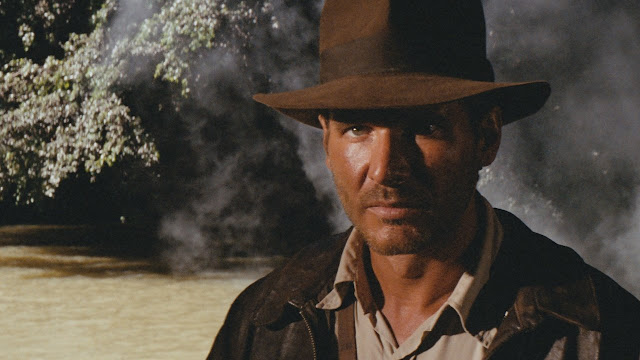 And we don’t follow any character more than Indy himself. Thank God Tom Selleck had to withdraw at the last minute. George Lucas had resisted casting Harrison Ford as he was worried about the overlap with Han Solo. But the part fits Ford like a glove. Sure, it comes from the same wheel-house as Solo – although Indy is more taciturn, intellectual and a degree less cocksure than Solo, more a man reluctantly forced into danger than a swaggering pirate – but Ford’s skill is faultless. Ford has an everyday quality to him, and he brings a world-weary tiredness to Indiana. He has the confident grin, but he’s just as likely to see that switch to concerned desperation (there is a perfect moment of this in the opening sequence, when the vine he is grasping on a cliff top suddenly works loose). He may be a bit of a rogue (not averse to shooting a swordsman) but he’s also a good man, with the street smarts of a ruffian, who is frequently exasperated by the errors of his sidekicks. This is the sort of man that men want to be and women want to be with – an impossibly difficult trick to pull off.

We relate to Indy because he’s vulnerable. He’s an underdog. The outstanding opening sequence – basically a little mini-movie in itself – showcases this. As Indy heads into a hidden temple for an idol (dodging spiders, bottomless pits, arrows from walls and most famously a huge boulder – a stunt Ford did for real) we get his entire character showcased. He’s astute, resourceful, trusting (sometimes too trusting) and ingenious. But he also takes a hell of a physical pounding, gets scared and above all goes through huge danger only to end up empty-handed. And of course, we find out he can cope with all this, but definitely not snakes (is there a better action set-piece punch line than “Grow a little backbone, will ya!”). It sets the tone for the rest of the film – in fact with the first five minutes alone, Raiders is already better than 99% of all other adventure films. 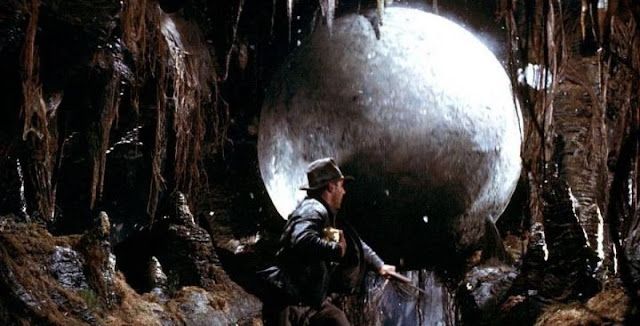 But then this is a director working at the top of his game. All the elements come together perfectly here: Spielberg always knows when to keep the tempo up, cuts the action superbly and also presents us with a brilliant mixture of tension, excitement and awe. He and Lucas brilliantly understand the power of images – there is a reason why a rolling boulder has become part of cinema’s language. The design of Raiders (one of its five Oscars) is absolutely perfect. Nothing like these temples could really have existed in real life – but as an evocation of 1930s adventure serials they are perfect. Mix that in with that brilliant sound design (those whip cracks for staters) and John Williams’ majestic score (from the classic Indy march to the haunting strains that tie in with the Ark) and this film is a masterclass for affecting the senses.

Then those set-pieces are told with just the right balance between thrills and wit. Again, Harrison Ford is a big part of this: he’s never smug, his trademark furrowed brow suggesting stress as much as his grin communicates relief at surviving. The truck chase – which sees Indy move from horse to truck, to under a speeding truck to back in the driving seat, half the time with a bullet in his arm – is a masterclass in thrills and superb editing. It’s such damn good fun that the film even gets away with a nonsensical beat where a car-load of Nazis is pushed off a huge cliff (the first and last indication that we are anywhere near a cliff in the whole scene!). Just like the opening sequence our hero’s combination of ingenuity, never-say-die determination and vulnerability is what makes it compelling (the Williams score also plays a huge part in building both the excitement and the triumph).

The whole film is a series of triumphant set-pieces. Spielberg also tinges the film with just enough darkness as well. The Nepal gun battle carries a real sense of danger, Indy’s fight with a tough Nazi air mechanic culminates in a quite gruesome death (although the fight beforehand has plenty of wit to it, as Indy is hopelessly outmatched physically by this giant). That’s all before the film’s famous closing sequence as the Ark finally opens up to reveal the power of God – bad news for the assembled Nazis crowded around it. The face-melting horror (and it’s hard to imagine any action adventure film doing something this horrific today) is impossible to forget, brilliantly executed and carries just the right amount of dread.

The darkness though is counter-balanced throughout by sly wit and a sense of fun. Wonderful jokes – from Major Toht’s nunchucks that become a coat hanger to an exhausted Indy responding to Marian’s kisses by falling asleep – pepper the script. The cast are fabulously chosen. Karen Allen is perfect as the independent Marian. Paul Freeman is chillingly austere and charmingly amoral as Indy’s rival Belloq. Denholm Elliott’s Marcus Brody is excellent as an older, wiser version of Indy very different from the comic buffoon he would become. The same can also be said for John Rhys-Davies Falstaffian but shrewd and loyal Sallah.

Raiders of the Lost Ark sees every element come together perfectly. Spielberg’s direction – the film did come in on time and on budget, going on to be the biggest success of its year – is completely perfect. Ford creates a character who from his first appearance is iconic (the zoom to introduce him is a wonderful tip of the hat to John Wayne’s classic entrance in Stagecoach – continuing the homages, the final shot is also a lovely nod to Citizen Kane). Every action set piece is a brilliant mix of thrills, danger, triumph and even a touch of horror (be it gruesome deaths or dreadful beasts). It’s a film that can not fail to entertain, raise a smile – and still have you hiding behind the sofa at points. Lucas and Spielberg wanted to make a film that would remind them of the adventures of our childhood. They were so successful that their film ended up defining the childhoods of millions of us.