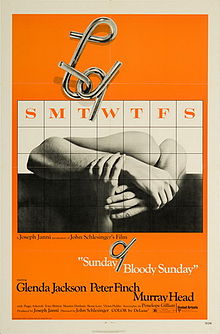 Is anything better than nothing? Or, sometimes, is nothing better than anything? It’s a question that lies at the heart of John Schlesinger’s mature and surprisingly low-key exploration of relationships Sunday, Bloody Sunday. In the on-going puzzle of life, what on earth are the answers?

Alex (Glenda Jackson), a divorced woman in her mid-thirties, is in a relationship with young artist Bob Elkin (Murray Head). But the bohemian Bob is also in another relationship, with 50-year-old Dr Daniel Hirsh (Peter Finch). Bob moves between his two partners. Alex and Daniel, who have never met, accept they have him on a timeshare basis and work within his rules, for fear of losing him.

That’s a brief summary – but this is not a film overburdened with plot. Rather it’s a character study. Perhaps its greatest strength (and for some it’s main weakness), is the lack of melodrama or conflict in this unconventional set-up. Any expectations that this might be building towards a cathartic outburst or a traumatic event of some kind should be dispelled from the start. This is a very restrained and genuine film, deeply heartfelt, that avoids cheapness.

In fact, the film becomes a very striking study of the fear of loneliness. Both Alex and Daniel live in semi-acknowledged fear of being left alone. You can see the emotional fragility in them, when separated from Bob. Alex – who Bob has abandoned during a weekend’s baby-sitting to visit Daniel – quietly sits eating fudge and trying to read a book, while tears play in her eyes. Later Daniel will similarly resemble a little boy lost after being stood up at a restaurant. The excitement of being with Bob – for all his faults – are just as acute as the sadness when left alone in their own company.

Both Alex and Daniel are people staring down the barrel of a life of being alone. Alex is a woman stuck between two stools – too bohemian to be happy in a nine-to-five and a safe everyday relationship, too conventional to fully embrace the sort of devil-may-care casualness of Bob. She seems uncertain herself what she wants from life (the perfect relationship, or the bursts of happiness with a young lover).

Daniel, a gay Doctor in middle-class London from a traditional Jewish background, has spent a lifetime quietly carrying on and accepting companionship where he can find it. A man who has understood that a certain degree of isolation is just part and parcel of being who he is. Who balances, perhaps, the flaws in his relationship against getting only a part of what he wants as opposed to nothing.

It’s those questions the film comes back to time and time again. Alex expresses them most clearly, happy in the moments of playful joy she finds with Bob, but this only covering deep lying anxieties. Flashbacks reveal her childhood worries about traumatic events befalling her father (bought on by the killing of a friend’s dog in a road traffic accident due to the carelessness of a child she is looking after). These fears are directly linked to her tentativeness towards long-term relationships: she invests emotionally so much in those she cares for, that it’s difficult for her to find a romantic partner that is perfect enough to justify this level of commitment.

But Daniel has similar issues: his life has taught him to expect that he might always be alone. An insight into his romantic life before Bob is shown with a chance encounter with a former pick-up (played with chippy aggressiveness by Jon Finch) who forces Daniel to give him a lift and then pinches his medical bag. These sorts of risky, emotion-free entanglements are dwarfed by the tenderness and warmth Daniel gets with Bob, for all that Bob is mercurial and immature. As Daniel says at the film’s end (in a beautiful fourth-wall breaking address to the camera), Bob isn’t perfect but he’s something and that while Bob never made him completely happy, right now Daniel is happy only when he is not missing him. It’s balances like this that people make in their lives.

It may also be a fascination with youth. Both Alex and Daniel are either heading into – or deep into – middle age, and they surely wouldn’t deny there is an additional excitement from spending time with the defiantly young Bob. Bob – a rather thankless role to be honest, played with a deliberate lack of depth by Murray Head – is in some ways a cipher, a rather selfish young man who can only think about moving on to the next opportunity, not the difficulties of being fixed in one place and making the best of it. Does this young man’s attitude carry additional appeal to two people with greater ties and responsibilities? Perhaps it does.

Schlesinger’s film is well-paced, and directed with an intimacy by the director who surely built many elements of his own life into Daniel. The two leads – who share a scene only twice, at one point literally passing each other in cars like ships in the night – are both superb. Glenda Jackson is superbly able to suggest a hinterland of emotional guardedness and fragility, behind a confident exterior, that only cracks at key moments. It’s a brilliantly subtle performance of small moments.

Peter Finch is equally superb as Daniel. The film was controversial at the time for featuring the first gay kiss in British cinema (sexuality questions are refreshingly not a major part of the equation and never discussed, which makes the film ever more modern – the kiss itself is played with an unshowy naturalism). The part had been hard to cast – Ian Bannan was fired (to his later intense regret) for being visibly uncomfortable – but Finch (less worried, perhaps because his romances with everyone from Vivien Leigh to Shirley Bassey were so well known, no one watching in the cinema could imagine he was really gay) embraces the part with a beautifully sensitive empathy. It’s a wonderful moving portrait of a man who has come to terms with loneliness and accepted it. Tender and very true, it’s wonderfully heartfelt.

Both stars (along with Schlesinger and the script, credited by Penelope Gilliatt but likely the work of several hands) were nominated for Oscars (inexplicably the film itself was snubbed), and its perhaps their sensitive and tender work is behind the film’s success. Schlesinger co-ordinates all this into a unshowy but very mature intelligent analysis of relationships and the compromises that come with them. Thoughtful and questioning, it’s adult cinema.