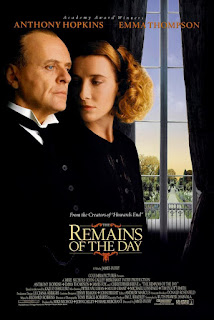 Kazou Ishiguro’s Booker-prize winning novel The Remains of the Day is one of my all-time favourites. So, it’s not a surprise I’m a huge fan of this masterful adaptation from the House of Merchant Ivory. I’m certain this is the apex of the team’s work. Mike Nichols had originally planned a film but, wisely, recognised when it came to making movies about repressed 1930s Brits, one team had a monopoly on how to do it best. Beautifully adapted by their regular screenwriter Ruth Prawer Jhabvala, The Remains of the Day is a wonderfully involving and deeply moving film.

Stevens (Anthony Hopkins) is a butler in a British country house purchased in 1956 by American Jack Lewis (Christopher Reeve). Keen to solve staffing problems (and for no other reason at all), Stevens journeys to the West Country to recruit the 1930s housekeeper, Mrs Benn nee Kenton (Emma Thompson). During the journey, he remembers his service for the previous owner, Lord Darlington (James Fox). An impeccable gentleman, Darlington dedicates himself to reconciliation between Nazi Germany and England, eventually tipping into an unwise dalliance with fascism and appeasement.

Stevens had no views on that though. In fact, he prides himself on his anonymity. The goal of his life is to maintain a dignified unobtrusiveness, ensuring the smooth operation of everything, leaving as little a mark as possible. Nothing can intrude on that: not his own feelings, the illness and death of his under-butler father (Peter Vaughan) and, above all, the unspoken romantic feelings between himself and Miss Kenton. The Remains of the Day is about duty and obsession and how a fixation on both can leave someone with little to show from a long life.

Stevens is living the lessons he learned from his father, an ageing powerhouse masterfully played by Peter Vaughan, who undergoes a physical collapse (from dripping nose to dropping trays) and bouts of forgetfulness, eventually dying on a night Stevens is too busy seeing to the sore feet of an illustrious French guest to spare a moment to visit him. It tells you everything about his character that this stiff-upper lipped commitment to duty is a source of pride to our hero.

There are few as curiously blank ‘heroes’ in literature than Stevens. The narrator of Ishiguro’s book is a dull, fussy, unbelievably cold man who has dedicated himself so fully to duty that he has let any emotional life wither and die on the vine – something he only realises far too late. It’s an immensely challenging role, bought to life masterfully by Hopkins. Hopkins astonishing skill here is to play all that repressed coldness on the surface, but also constantly let us see the emotion, longing and regret he is subconsciously crushing down play in his eyes and the corners of his mouth. Is Stevens even aware how much self-harm he is causing? It’s an astonishingly subtle performance.

So subtle in fact that the books conclusion – Steven’s tear-filled confession to a stranger late at night of all the mistakes he has made – was filmed but cut for being superfluous. Hopkins had done the lot, all the way through the movie, through acting skill. You can’t miss the struggle within him, not least the desperate, powerless longing he feels for Miss Kenton that, for oh-so-English reasons he can never admit to himself. Hopkins has the vocal and physical precision, but every gesture tremors with unspoken, barely understood longings. In fact, it’s a shock when he exclaims an angry “Blast” after dropping a bottle of wine (the real cause of his outburst being, of course, Miss Kenton’s announcement that she is getting married)

He and Miss Kenton conduct a professional relationship that blossoms into something like a friendship – but he consistently rejects her polite efforts to take it further. In the film’s most powerful scene, Miss Kenton enters his parlour and playfully tries to see the title of the novel he’s reading (a sappy romance). The playfulness tips into agonisingly awkward tenseness as Hopkins’ Stevens seems paralysed, his hand lingering inches from her hair but unable to bring himself to break decorum and fold her in an embrace – all while Miss Kenton continues her increasingly desperate semi-flirtatious banter. It of course ends with Stevens dismissing her: just as later he will take a snap of frustration as a signal to irrevocably cancel their late-night cups of cocoa together. 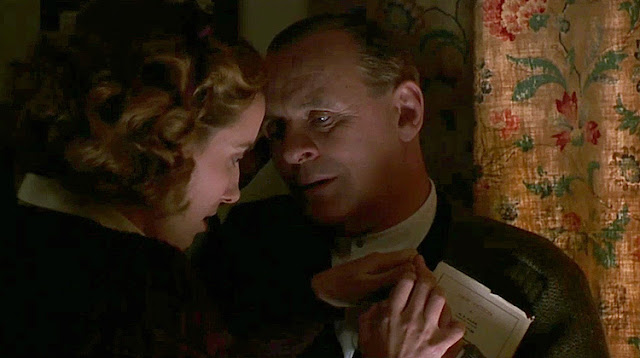 Emma Thompson is wonderful as a woman only marginally more in touch with her feelings and longings than Stevens is: aware that she, eventually, wants more from life, but unable to find the way of communicating the love she clearly feels for Stevens in a manner he can respond to. Instead, the two of them oscillate between a friendly, affectionate alliance and a discordant arguments (their only outlet for their passion), rooted in their inability to admit their feelings for each other. To further stress the point, both of them mentor young staffers (played by a very young Ben Chaplin and Lena Headey) who have the youthful “what the hell” to jack in all this for love.

Ivory’s wonderfully subtle film makes clear this is a turning point in history, the final hurrah for the this sort of deferential hierarchy. Stevens is the last of a generation of butlers, convinced that what their employers got up to had nothing to do with them – views not shared by Tim Piggot-Smith’s more grounded Benn, who chucks in his job working for a bullying blackshirt (who else but Rupert Vansittart?). Throughout the 1950s storyline, Stevens is constantly asked if he knew the infamous Lord Darlington (a sort of Lord Londonderry figure, hopelessly taken in by Hitler) – in fact, like Paul, he twice denies ever having known him.

And you can understand why, as the film has sympathy for Lord Darlington. As his decent, liberal god-son Reginald Cardinal (an excellent Hugh Grant) says, Darlington is a great asset for Germany precisely because he’s honest, well-meaning and motivated by a desire for peace. The fact that his leads him to consort with a host of Nazis, Blackshirts and the most appalling anti-democratic vestiges of the upper-classes (at one point, Stevens selflessly gives a performance of geopolitical ignorance so as to help demonstrate why men like him shouldn’t have the vote) is an unfortunate side-effect.

Played perfectly by James Fox, Darlington is misguided but genuine. As war approaches, he leads an increasingly hermit like life – camp-bed and paper-strewn, messy library – hosting conferences denounced by Jack Lewis (a fine Christopher Reeve) as a host of amateurs talking about a world they no longer understand. Beneath it all, Darlington is guided by fair play. So much so, it’s almost distressing to see him (under the influence of an attractive German countess) reading anti-Semitic pamphlets and sacking two refugee Jewish maids – an act he later regrets (far too late). This moment also reinforces Stevens’ compromised pig-headedness (not his place to judge!) and Miss Kenton’s fear to act (she’s horrified, but to scared of unemployment to hand in her notice).

All of this culminates in a series of scenes where emotions pour out of the actors, even while their words are banal and everyday memories and reflections. Ivory was never more confident and skilled behind the camera, and the film is a technical marvel, beautifully shot with a wonderful score from Richard Robbins. Hopkins is phenomenally good, simultaneously pitiable and smackable, Thompson is wonderful alongside him, Fox and Grant perfect – it’s a very well-acted piece. And a wonderfully perfect capturing of a classic modern British novel. No doubt: the best Merchant Ivory film.