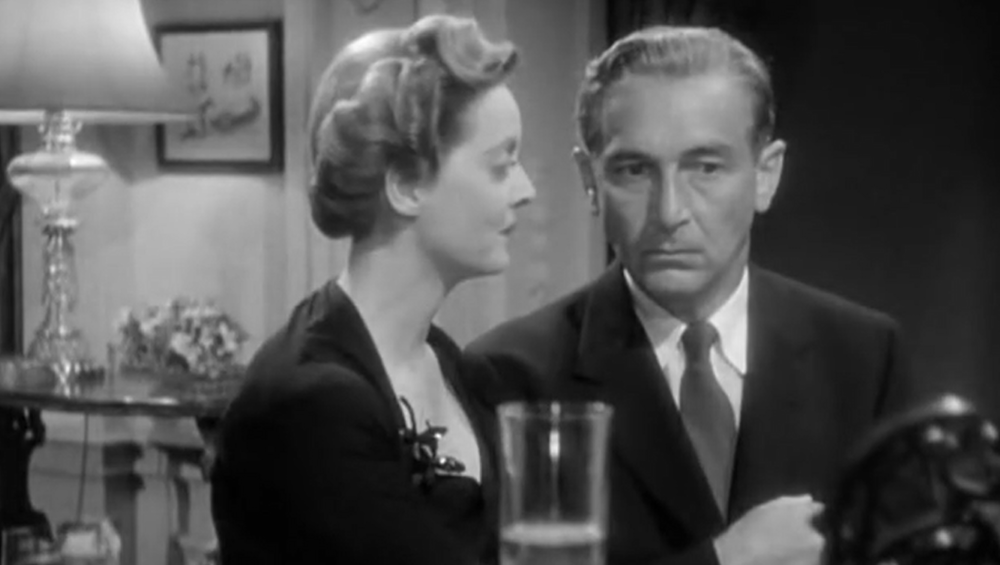 Dialogue heavy, drama light, war-time propaganda, that was already dated by the time it was released

In 1940, dedicated anti-fascist campaigner Kurt Muller (Paul Lukas) arrives in the USA with his American wife Sarah (Bette Davis) and their children. They are welcomed by Sarah’s mother Fanny (Lucille Watson), but soon discover that America has little understanding of the dangers of Nazism – and that there is in danger in their refuge. Fanny’s other houseguest is Romanian diplomat Teck de Brancovis (George Coulouris) – whose wife Marthe (Geraldine Fitzgerald) is quietly in love with Sarah’s brother David (Donald Woods) – and he has every intention of selling Muller out to the Nazi embassy if he doesn’t pay him thousands of dollars. Can the Mullers escape?

Watch on the Rhine is adapted from a play by Lilian Hellman. Hellman was otherwise engaged and unable to write the script, so her long-term lover Dashiel Hammett came on board to open up the one-set play into a movie, with Hellman providing some additional speeches. Their best efforts can’t hide the fact this is a painfully worthy, preaching-to-the-choir propaganda piece. It’s packed with on-the-nose (if well-written) speeches and horrifically slow in its pacing and plotting.

First staged in early 1941, the original play did at least serve a clear purpose. It preached about the dangers and evils of fascism to a nation watching Europe tear itself apart. It was a heartfelt cry to understand that Hitler and his cronies were wicked men determined to let all the liberties America held dear burn. Its characters speechified at length about the conditions in Europe, the loss of freedom and the wickedness and danger of a political movement many in America felt was basically someone else’s problem.

This would have carried some real power as a rallying cry if the play had been bought to the screen in 1941. But, by 1943, American soldiers were already fighting Nazi forces in Africa and Italy: it hardly felt necessary to cry for intervention. Even by 1943, it was a period piece, looking back at a moment in time when fashionable types went to the German embassy for fancy dinners with black-shirted diplomats. And certainly, viewing it now, even its 1943 perspective looks slightly naïve and uninformed, in light of the horrors we now know were taking place.

Shorn of its original purpose to educate, the film comes across as a mix of heavy-handed propaganda (“This is why we fight!” it might as well be saying) and civics lesson.  It’s because, frankly, there is very little drama at all to take the place of the political lecturing. It’s fair to compare the film to Casablanca – another film that calls for action, released after a point when action had been taken. That could have been a propaganda piece: instead it’s a fast-paced, drama packed mix of romance and conspiracy thriller where Paul Henreid (remarkably similar to Lukas’ character here) struggles to gain the papers to escape from Vichy with a life-and-death urgency this film never musters.

Although Watch on the Rhine eventually works in a blackmail plot, where Muller’s plan to return to Europe and take on the leadership of the anti-fascists is threatened by George Coulouris’s smarmy diplomat, it takes so long to get to this (nearly an hour of screen time) your attention may well already have been lost.

Watch on the Rhine was directed – rather flatly, in one of his only two films – by it’s original Broadway director Herman Shumlin (heavily assisted by cinematographer Hal Mohr). The cast included several actors recreating their roles, including Lukas, Coulouris and Lucille Watson. Obviously, this left it short of heavyweights for the box office so the studio bought in Bette Davis to play Muller’s wife, expanding the role heavily (and insisting, against her protests, that she get top billing). Davis – exhausted after working intensely on Now, Voyager – took the part out of commitment to its message, but struggled with both Shumlin and serious personality clashes with Lucille Watson over their wildly differing politics.

Shumlin was unable to rein Davis in and Watch on the Rhine features one of her more melodramatic performances. Almost every scene features her staring off into the middle distance, voice trembling (not helped by Max Steiner’s music swelling magnificently practically every time she speaks). It’s a performance that never quite rings true, especially when compared to the underplaying from Lukas, who won the Best Actor Oscar for his low-key, restrained performance. He is quiet and genuine – and his pain and desperation when driven into a terrible moral choice is moving – but it’s hard to shake the feeling this fine performance was rewarded more for the words from his lips (especially since he beat Bogart in Casablanca). Watson was also nominated, playing the sort of role beloved by awards ceremonies, an eccentric old snob with a hidden heart of gold.

Watch on the Rhine is a rather dull civics lesson full of worthy speeches and very short on drama. It also has some of the most irritating child actors you will ever see (already infuriatingly precocious, the kids communicate their German background with stilted, precise accents). Even in 1943, its moment had passed and it never manages to create any dramatic point compelling enough to make you want to rewatch it. A film less worthy, and more willing to indulge in espionage thriller, would have been a distinct improvement.