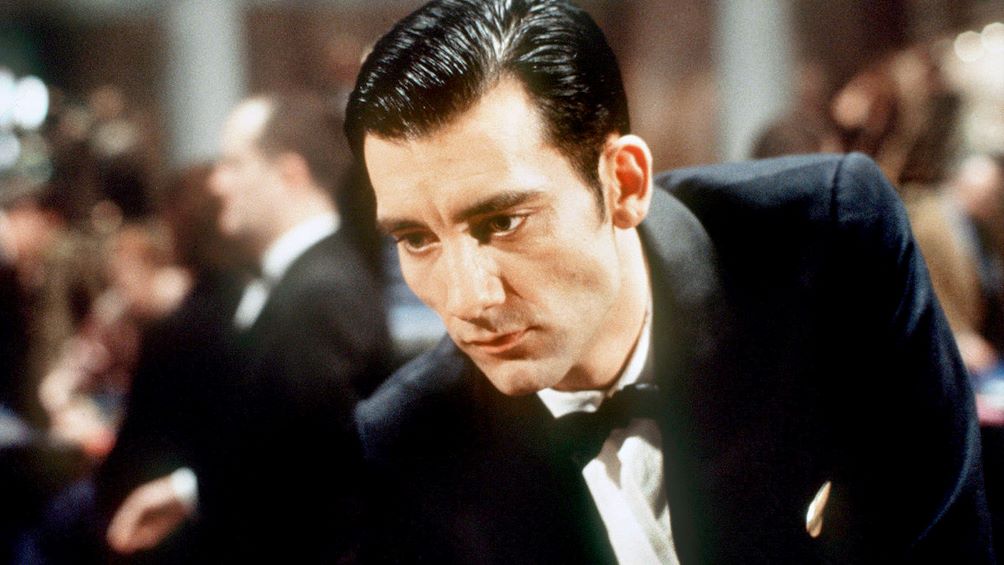 The last thing would-be writer Jack (Clive Owen) wants is to be sucked back into the grimy underbelly of the casinos where his father (Nicholas Ball) made his living. Jack fears his addiction to the places. But his buzz is not the gambling or the chance of raking in cash himself. Nah, his particular hit is the cold voyeuristic delight of watching others lose. The greedy, the arrogant, the clueless, the desperate: he gets the same buzz from sweeping their chips away from the table in front of them. Jack knows you play, you only guarantee you will lose: but will glamourous South African Jani (Alex Kingston) persuade him to join her in another game against the casino?

Mike Hodges’ fascinating crime drama struck out of the blue to restore Hodges from yesterday’s man – the forgotten master of Get Carter – as a vibrant voice in British cinema. Typically, of course, this was only after the film had been all but ignored in Britain but became a hit in America. An Oscar campaign was planned but cancelled when it emerged a single screening on Dutch TV before its release in LA made it ineligible. Nevertheless, the film’s cold, arch mix of distance, cool and menace was a keen reminder of what a great director of mood and intention Hodges could be.

Hodges also has the perfect actor in its lead role. Clive Owen’s precision, quiet exactitude and mastery of the micro-expression is perfect for a man as distant, observant and (at times) uncaring as Jack. Only someone as effortlessly cool and striking as Owen could have made us like Jack as much as we do, a particular challenge as he is a cocky shit with an almost sociopathic coldness, viewing the creep of the voyeur who loves control. Owen captures all this perfectly, his voice rarely rising, his life lived to a sort of bizarre samurai code where he the only person he needs to impress with his superiority is himself.

Hodges film is one of mood and sensation rather than plot. Events unfurl with an increasingly dream-like logic, dictated by Jack’s noir-like voiceover as he slowly turns his life and experiences in the casino more-and-more into fiction. Sections of the film are divided into chapters in voiceover and Jack’s arch commentary exposes his views of those around him (communicated only by the most micro expressions on Owen’s face). Jack dreams of publishing a novel that will worm its way inside people: it’s the yearning not of the artist but the control freak, as excited by the sensation of knowing his words can guide people’s reactions and feelings just as a flick of his wrist at the card table or the roulette wheel can enrich them or drive them to destitution.

Jack’s control makes him a perverse stickler for rules. Jack’s professional croupier life – slicing money with a thunk down a pipe to the cashier or sweeping lost chips into a count-up oblivion (Hodges’ eye for the brutality and violence in the mechanisms of gambling is matched by his brilliance in demonstrating the businesses cold-eyed indifference to short-tern winning and losing) – is one of masterly control. His personal something else. The drama comes from wondering how far he will stick to that when offered the temptation, not of wealth but of proving he’s smarter than anyone else. There he allows himself the risks that he would never take when working.

Three women rotate around Jack. Gina McKee has the most thankless role of the three, a cop turned store detective who seems to be propping up the initially bohemian (a blonde, porkpie hatted Owen) Jack but offers the sort of dull, parental support lacking in his life. Two other women appeal to different parts of him. Kate Hardie’s Bella – a fellow croupier as chillingly professional as the DJ-suited Jack – is a sort of half-mirror image, bubbling with temptation (and very appealing to an egotist like Jack, who would like nothing better than to sleep with himself). Most striking of all is Alex Kingston’s erotic punter Jani, a mysterious South African who attempts to both seduce and bring out the protective side in Jack. Jack may never gamble his money, but risk in her personal life seems a harder dodge. He sleeps with women, gets in fights – which he engages in with a terrifying capacity for violence – and casually seems to invite dangers to drop into his path.

Spontaneously taking Jani to a weekend at the country-house of a would-be publisher, Jack mixes his buzz of voyeuristic control with the temptation of doing something wild and dangerous. He agrees to join a late-night card-game as dealer only – and promptly uses his card shark skills to deal out a series of progressively brilliant hands to the players in the final game. He then goes to bed with Jani, doesn’t touch her but quietly listens to her offer of ten grand in return for his aid in stealing from the casino. This is not the behaviour of a normal man.

If the film has a flaw, it’s the almost indifference with which Hodges wraps up most of these plots. There is a shock death, but the impact of it is almost deliberately passing and the heist of the casino is as laughable in its amateurishness as it is sudden in its resolution. Is it because we have moved from the real world to Jack’s noirish I, Croupier novel without realising it? You could imagine, as the film grows more dreamlike, that at some point we shifted from Jack’s reality to the constructed one he has formed for his novel. What better thrill for a control freak than to become ‘God’ of the narrative. After all Jack dreamed of his novel climbing inside people’s brain and infesting their thoughts.

Jack ends the film the smartest, most well-adjusted addict you could ever imagine, The short-term job at the casino is something he cannot let-go and Hodges’ shooting of this den of addiction, this theatre of destitution turns it into a mirror-lined sess-pit of human frailty, reflecting vice back into itself, presided over by a man who delights in weakness. More money is swept, triumphantly, from the table by Jack and its clear being there for him is the real triumph. Atmosphere, style and vicarious thrills. It’s these chilling things Croupier finds so thrilling, enticing and fascinating.