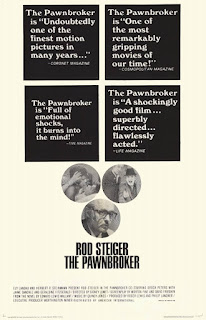 Sol Nazerman (Rod Steiger) lost his entire family – including his wife and two children – in the Holocaust. Previously a University professor, he has now cut himself off from engaging with life by burying himself in a dingy pawnbroker’s shop in Harlem, where he treats his desperate customers like “scum”, offering them nickels for their goods. On the anniversary of his wife’s death, Sol confronts his own grief, tensions from local crime boss Rodriguez (Brock Peters), the offer of a friendly ear from new neighbour Marilyn (Geraldine Fitzgerald) and the unwanted friendship of his assistant Ortiz (Jaime Sanchez).

It’s probably not a spoiler to say that all of this does not end well. The Pawnbroker is almost unrelentingly grim and bleak. Shot in a harsh black-and-white – superbly lensed by Boris Kaufman – it mixes French New Wave realism with a punishingly cold New York aesthetic that catches every grain of dirt on the streets. The past is virtually a character in the film, the events of over twenty years ago having far more importance than many of the trivial events Sol encounters in the present.

The constant presence of the Holocaust, and the scars it has left, are kept in our mind by the film’s constant use of quick – almost subliminal – cuts from current day events to snippets of Sol’s past. Hands pressed against windows turn briefly into hands against barbed wire. A young lady flicks back and forth into Sol’s wife. The sounds of a train inevitably transform into a transport train. Lumet makes it clear to us that everything Sol sees and encounters in the modern world, no matter how small, is just a continual reminder of the horrors of the Holocaust that defined his life.

This isn’t something as ‘simple’ as survivor’s guilt. It’s clear that, while his body survived, Sol effectively died in the camps and what we are seeing is his walking corpse. He’s deliberately alienated himself from the world and his concern, with no real desire to live but also no will for self-destruction. Perhaps he sees his continued existence as a punishment for failing to save his family. This has developed into a loathing for the melting pot of Harlem, a stubborn, conscious refusal to feel any empathy for anyone living there. Instead, he works hard to loath them as much as he loathes himself. Trapped by guilt and grief, Sol slaps away any offers of friendship, pity or warmth.

The film’s greatest strength is Rod Steiger’s towering performance. Normally Steiger was an actor who never shied away from the possibility of over-playing. Here, he’s so buttoned down and spiritually dead, every single movement like he’s walking around in a physical and spiritual straitjacket. Sol scuttles around the cages of his pawnshop, like a guy who has never left the camps. His performance is a masterclass in precision, of carefully restrained movement, gruff speech and eyes that stare into a dread a thousand miles away. Every step Steiger takes is weighted down by an impossible burden of grief, anger, despair and self-loathing.

It also avoids completely easy sentiment. For all that we see the suffering slowly revealed of Sol’s past, Steiger isn’t afraid to show Sol as a difficult, arrogant, even unpleasant character. The defence mechanism of hostility and non-engagement of the world has only increased his prickly aggressiveness. But yet, he remains sympathetic as Steiger also conveys the deep pain Sol spends every single minute of his life suppressing and controlling to stop it overwhelming him.

If there is a fault with the film, it’s that it goes about its carefully bleak and hopeless journey through a few days in Sol’s life with slightly too much precision. The Pawnbroker sometimes mistakes grim, hard-hitting and misery for emotional investment. For all that the film is a difficult, searing watch – and the terrors of the flashbacks are ghastly – it’s somehow not quite as moving as it should be. Perhaps this is because the present-day plot never quite takes off and the other characters – with the exception of Peter’s chillingly ebullient but dangerously violent Rodriguez – don’t quite connect. Fitzgerald’s social worker Marilyn is a character we don’t quite get to know. Not quite enough time is spent with Sol’s in-laws (despite good performances from Marketa Kimbrell and Lumet’s father Baruch Lumet) for their story arc to move us in its own right.

Similarly, the Holocaust sequences – brief and interspersed as they are – sometimes overplay their hand, particularly the rather heavy-handed opening sequences showing the Nazerman family playing in the field minutes before the Germans arrive (accompanied by a thudding musical score – and Quincy Jones’ score sometimes tries to do much work for the viewer). It would be hard not to make The Pawnbroker at least a little bit moving, but Lumet’s film bludgeons us with misery so heavily, that there is no sense of the lightness or warmth of life that has been lost. Scenes of the Holocaust of course are hard to watch, but The Pawnbroker bashes us with them to make us feel things. It’s a film that’s tough and leaves you in no doubt of the horror, but doesn’t always make you feel for individual. You need a touch of what was lost to be truly moved: with no real sense of that, we can’t grieve with the characters.

But, The Pawnbroker is still a daring film that leaves a lasting impression. Lumet’s direction has a New Wave freshness and an immersive sense of the New York Streets. Steiger is fantastic in the lead role – his most restrained (and greatest) performance ever. The film broke new ground for sexuality – including making Rodriguez a non-camp, intimidating homosexual – and while the final beats of inevitable tragedy aren’t quite earned by the events we see, it’s still a grim and powerful look at the lasting damage the past causes the present and the crushing legacy of grief.