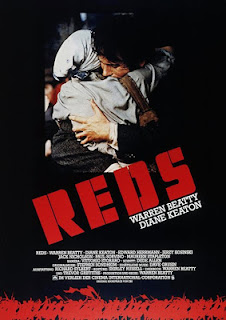 Reds is the film only Warren Beatty could have made. Imagine the pitch meeting: I want to make a three hour long biopic about American communists, with the hero being the only American buried in the Kremlin, and I need $30million dollars to do it. Only Beatty had the force of personality to get major companies to invest greenbacks into a film celebrating a man who would have happily cheered their demise. Reds is a tribute above all to the dedication of its multi-titled director and his refusal to compromise. It’s a big piece of serious minded, educational but also dramatic and romantic storytelling. Not many people could have pulled it off.

In 1915 Louise Bryant (Diane Keaton), a young would-be journalist and suffragette, meets and falls in love with left-wing journalist John Reed (Warren Beatty). The two of them tun off together to Reed’s bohemian circle in Greenwich Village, New York then to Massachusetts, becoming the centre of a community of anarchists, socialists and artists. Their mutual love is damaged by affairs – in particular Bryant’s heartfelt affair with the sensitive Eugene O’Neill (Jack Nicholson) and Reed’s own (off-screen) infidelities – but is rekindled as they are swept up in the Russian Revolution, an event that motivates Reed to try and build a similar communist party in America (with very little success). But, when Reed is trapped in Soviet Russia, how far will Bryant go to reunite with him?

Beatty’s dream of making a film on Reed’s life had been knocking around in his head since the 1960s, but it took the success of Heaven Can Wait in 1978 for him to finally have the muscle to get the film made (when Studio execs, having signed the deal, begged him to consider another subject Beatty stuck to his guns). He originally planned only to produce: that quickly expanded into also writing the script (with Marxist British playwright Trevor Griffiths, a hilarious personality mismatch with the Virginian millionaire Beatty), then directing it and finally, to be completely sure the project went where he wanted it to go, playing Reed as well. It would result in Beatty joining the short list of people nominated in four different categories for one film at the Oscars (but he won only Best Director, Reds losing out the big one to Chariots of Fire). 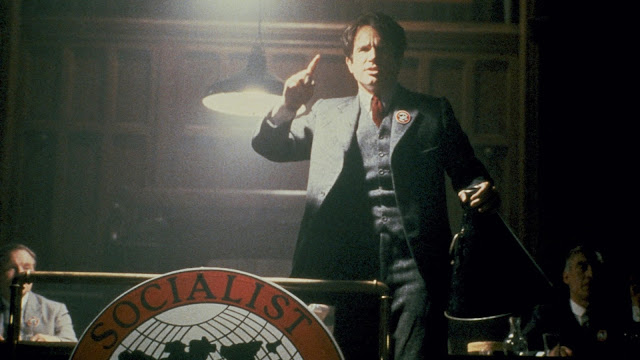 The real strength of Reds is probably Beatty’s producing. This is a huge epic, filmed across multiple countries in Europe (standing in for each other and for America), marshalling a vast number of sets and locations. Much like Attenborough’s Gandhi, it’s a film directed with a smooth, professional competence, but stage-managed to the screen with the flair of a master producer. Each department was staffed by an expert: Vittorio Storaro shot the film with a Golden Age beauty; Stephen Sondheim contributed to the score; Dede Allen assembled thousands of hours of footage, and dozens and dozens of takes of every scene, into a coherent, pacey movie that effectively balances politics and romance.

In many ways, Reds is like the mirror image of Lean’s Doctor Zhivago (it even has a late train ambush set-piece, chugging through the Spanish wheat fields, that could have come out of Lean’s epic). That film was a romance-for-the-ages that used politics and revolution as a backdrop. Reds uses romance and personal stories as a context-setting background, to push to the forefront politics and revolution. This is perhaps the most earnest and impassioned exploration of the history of American left-wing politics in film history. Giving a lot of time  – particularly in its second half – to scenes made-up entirely of impassioned socialists sitting in a room arguing at each other over the minutia of party rules and ideology, this is the sort of epic Ken Loach would have been proud of making.

The politics are also genuinely interesting, quite a feat in itself. Beatty is unafraid to look at the fundamental weaknesses of Western left-wing politics: its own worst enemy is always itself. People who agree on 90% of the issues, swear themselves to become life-long enemies because of differences over the remaining 10%. In one dynamically filmed sequence, Bryant is a frustrated and resigned observer as Reed oversees the split of the American Socialist Party into no less than three factions, two of which set up rival claims to be the “official” Communist party of America.

Not that Reds has any sentiment for Russia: Beatty is savvy enough to know (I wonder if Griffiths was?) that the USSR is about a million miles away from ideal. Factionalism is just as prevalent there, with the difference being the main faction happily uses, suppresses and crushes the others. Reed’s time in Russia sees him becoming increasingly disillusioned and homesick, as he realises a dictatorship isn’t made palatable just because it’s a Communist Dictatorship. As the representative of that system, author Jerzy Kosinski makes for a grippingly stone-faced and ruthless Zinoviev, brow-beating any deviation from the party line.

Beatty makes all this political theorising and left-wing political infighting palatable, by framing it carefully around a genuine romance between Bryant and Reed. For all the unconventionality of their open-ish relationship (their feelings on this change from infidelity to infidelity), these are two people who share a deep and lasting bond on both an emotional and a political level. Both skilled writers, we are shown time and again that they bring out their best work from the other and that when they are focused on each other, they have a mutual understanding few can hope to match. 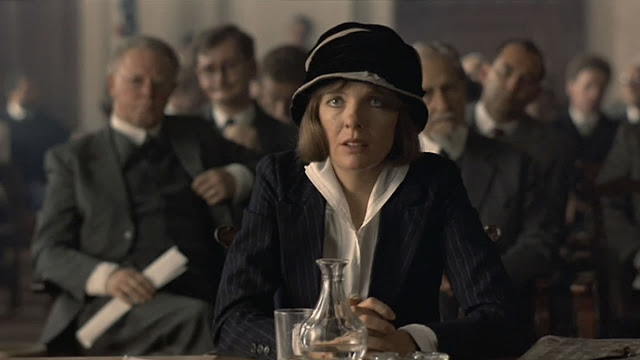 As Bryant, Beatty (who was in a relationship with her at the time – which didn‘t survive the epic shooting schedule) cast Diane Keaton. It’s a stroke of genius – and this is certainly Keaton’s finest performance. In a way no other role has allowed her, this looks past Keaton’s comedic skills and allows her to match her intelligence and spark with a woman who challenged norms, as a skilled writer and journalist. Keaton can play heart-rending emotion just as well – her breakdown fury at discovering Reed’s infidelity is fully-committed without being OTT – and she’s perfect as the increasingly disillusioned observer of left-wing failures. She believably flourishes from a woman uncertain of who she is to become a determined intellectual willing to cross continents to find what she wants. It’s a brilliant performance, smart, sharp and moving.

Beatty fronts-and-centres her so much, he slightly short-changes himself – playing Reed he doubles down on the boyish charm and enthusiasm (and he feels really young here), making Reed an enthusiastic, vulnerable, naïve figure. We just don’t quite get a real sense of who he is beyond that. You can’t say the same for Nicholson’s Eugene O’Neill, delivering a remarkably low-key, restrained and sensitive performance. He’s loving, emotionally vulnerable and eventually devastated, in one of his finest acting performances. Maureen Stapleton won the Best Supporting Actress for her Earth-mother anarchist Emma Goldman, the cuddly aunt of firey, confrontational anarchic politics.

Reds is marshalled by Beatty into an epic that powers along effectively. The first half of the film gets its narrative balance right: contrasting personal and political growth with a backdrop of War and Revolution. The second half leaves a little too much to chew, a vast amount of political debate rushed through with a series of increasingly short and sometimes disconnected scenes. Beatty balances the narrative with extensive “witness” interviews, from real-life contemporaries of the characters. (These are never identified, which is a bit of shame as it never allows to really know what their perspective was). It adds a feeling of earnestness to a project that gets an effective balance between politics and the personal, between showmanship and details and between scale and intimacy. While it is more of a producer’s film – and rushed in its second half – than a triumph of directorial imagination, it’s still an impressive – and informative – achievement.