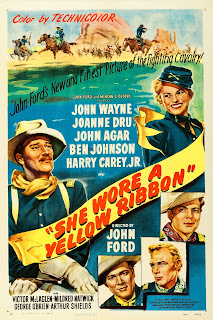 If there is a film that marks John Ford as the great American Artist of the West, it might just be She Wore a Yellow Ribbon. Shot in glorious Techicolour on location in (where else?) Monument valley by Oscar-winning cinematographer Winton C Hoch, it’s a gorgeously lit celebration of everything that made the American West a legend. Streaking red sunsets, rolling plains, lightening that slices through the sky, masculine military ruggedness beautifully bought to the screen. It’s Ford’s biggest push to become a Winslow Homer or Edward Hopper of the wide-open American space.

Nuzzling in the middle of Ford’s unofficial Cavalry trilogy (either side of Fort Apache and Rio Grande), John Wayne plays Captain Brittles (who might as well be Kirby York again, since he shares the same personality and most of the same backstory), is counting down the last few days until retirement. After Custer and his men are slaughtered at the Battle of Little Big Horn, he’s ordered to lead a cavalry patrol to fly the flag and help prevent a new war with the Indians. At the same time, he’s to escort his commander’s (George O’Brien) wife (Mildred Natwick) and niece Olivia (Joanna Dru) to an eastbound stagecoach (and safety). Olivia herself is in the middle of a love triangle with the two lieutenants eying taking on Brittle’s command, Cohill (John Agar) and Pennell (Harry Carey Jnr).

The film tells the story of that patrol and the subsequent follow-up mission to save those caught protecting the rear guard (needless to say Brittles continues the mission after his supposed retirement, bending the rules). There isn’t actually much in the way of plot in She Wore a Yellow Ribbon. Instead, Ford’s intention is to front-and-centre those particular American qualities of loyalty, honour, dedication to the cause and self-sacrifice. The men of the cavalry always put their country and fellow soldiers first, willing to sacrifice themselves to the greater good and show not one jot of hesitation in doing so. Ford shoots all this with real beauty and more than a touch of whimsical wit, coming particularly (where else?) from the Irish American contingent among the soldiers.

At the film’s heart is Wayne himself, now cemented in Ford’s films not as the traditional romantic action hero, but an elder statesman, wiser and less trigger-happy than his fellows, an unflappably experienced man who guides and inspires, shrugging off praise with an aw-shucks-just-doing-my-duty nobility. If Fort Apache and Red River were first steps towards Wayne – at this time only just past 40 – starting to act as if he was ten years older than he actually was (and in Red River’s case a little bit older than that!) – She Wore a Yellow Ribbon cemented him as the grizzled, inspiring man of action, a role he would play in variation for most of the rest of his career.

And he’s very good in She Wore a Yellow Ribbon. Ford had of course been impressed by the depth and shade of his performance in Red River. This is a simpler role – it would be a few more years before Ford used the darkness in Wayne as well as that film – but it shows Wayne slotting into place as part of What Made America Great. Wayne plays Brittles with a sadness – he’s a touching grieving husband, who takes a familiar chair out every night to talk to his wives tombstone – and a fatherly concern for his men, but tolerating no selfishness or greed. He mentors and pushes Cohill and Pennell like a second father, and has a brotherly banter with his loyal sergeant (inevitably Victor McLaglen as a hard-drinking, extremely Irish drill sergeant). He will do his duty, but he also respects Indian culture, will fight but prefers a peaceful option, will follow orders but never blindly. He’s all that’s good about the American fighting man, and this is one of his finest performances (and a personal favourite of his).

The yellow ribbon wearer is Joanna Dru as Olivia, the sort of spunky young woman Ford’s films frequently feature in key roles. Dru is just about the archetype: brave, determined, smart – much smarter than both of the rather dull men playing court to her. She’s also sensitive and understanding of Brittle’s grief and can hold her own with the men out in the field. Dru’s very good in the role, bringing it a great deal of depth and more than a touch of heart.

She Wore a Yellow Ribbon, plot wise, is more of a day-in-the-life movie. At heart not a lot actually really happens in it other than following the cavalry on two missions (one of which fails) and far from averting the war, it’s explicitly suggested they are just delaying it. The status quo is almost completely restored by the film’s end. The real focus of the film is the detail of what the men set out to do, the determination and humanity with which they go about it – not least the self-sacrificing bravery – and then the return to rest and prepare to go out again. All shot in some of the most striking and beautiful images of the West ever committed to the screen. As a visual tribute, the film is a rich feast.

It’s Ford’s celebration of America and the West and his case for the beauty and majesty of a generation and the values that they placed above all others. For this, She Wore a Yellow Ribbon may be one of the finest of its kind. It lacks the narrative thrust of Fort Apache – and like that film is, in the end, as unquestioning and uncritical of the actions and legacy of those pioneers out West, or the dangers of imperial expansionism or blind veneration of deeply flawed heroes like Custer – but it’s beautiful, very well acted (particularly by Wayne) and a fine film from a director at the top of his game.