An impulsive decision leads to a wild tour through mind and memory in this mind-bending, desperately romantic classic 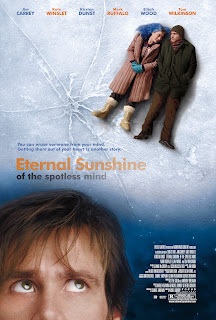 What makes us who we are? If it’s anything, it might just be the sum total of our experiences. The events of our lives, and the emotions they cause in us, shape and define us. If we cut some of them away, what would we be? Is losing painful memories worth it, if we also cut away memories we cling to as treasured possessions? What makes us love someone: instinct or the sum total of our memories with them? Ideas around this and how love works are at the centre of Michel Gondry and Charlie Kaufman’s extraordinarily inventive, imaginative but also romantic and heartfelt Eternal Sunshine of the Spotless Mind, a truly original film crammed with rewarding moments.

Joel Barish (Jim Carrey) wants to make-up with his electric but troubled girlfriend Clementine Kruczynski (Kate Winslet). Imagine his pain when he goes to see her and she seems not to recognise him – and how much worse that might be when he discovers Clementine has erased him from her memory. An experimental surgery, Lacuna, run by Dr Howard Mierzwiak (Tom Wilkinson), offers its clients an unmatchable service: they will erase a person from your memory. Struggling to get over the loss of a partner, wife, friend, child or even dog? No problem, they’ll be gone from your mind and you never need worry about their memory causing you pain again.

Hurt and angry, Joel decides to undergo the same surgery to forget Clementine. While the procedure takes place over night – supervised by techs Stan (Mark Ruffalo) and Patrick (Elijah Wood) and Stan’s girlfriend (and Dr Mierzwiak hero-worshipper) Mary (Kirsten Dunst) – Joel comes to realise in his sub-conscious that he doesn’t want his memory stripped of Clementine. The cost of losing so many good memories isn’t worth it. In his sub conscious he tries to protect his memories – while in the real world the team battle to complete their contract and erase them.

Not many films like that are there? Gondry’s film could have been a slave to its concept. Instead though, it manages to juggle its deeper meanings with a truly heartfelt, winning and very sweet human story about two people who, for all their faults, become people you completely invest in. Kaufman’s script, as you would expect, triumphs as a complex and inventive magic tour but it’s also a wonderfully placed romance and heartfelt relationship story. Effectively the film manages to have something for everyone to invest in, from sci-fi nerds to lovers of romcoms to philosophy students.

It’s also a triumph of style. Set largely in Joel’s mind, the film reflects the fractured nature of the surgery as his memories are assaulted, deconstructed and destroyed. Lights fade, buildings disassemble and disappear, faces melt away from bodies and memories start to crash into each other. In his mind Joel walks through a door in a library to find himself on a beach, or rounds a corner to find himself back in his childhood memories. All of this is filmed with a series of stunning in-camera effects that make characters disappear, duplicate or seem to be in several places at once, all shot in a series of one-take effects that sees buildings disappear in front of us or fascinating memory loops. Visually the film is a feast, a tribute to Gondry’s playful imagination.

But it sticks with people because of the heart at the centre of it. Joel and Clementine become people we care about. We root for Joel to defy the odds and preserve some of his memory. Because, the film makes clear, being consciously aware of his memories being deleted is basically like going through the pain of losing her a second time – only this time knowing you won’t even be left with the parts you want to hold onto. In fact – re-enforced by the distress we see in Clementine when we see her undergoing the panic of being subconsciously aware of memory loss in the real world – Joel’s horror of what he has asked for is likely what all the other patients of Lacuna’s ‘brain damage for your own good’ surgery have gone through.

Superbly played by Jim Carrey and Kate Winslet in cast-well-against-type performances, Joel and Clementine might at times be selfish, frustrating, even irritating people – but it’s clear their love for each other is real. Jim Carrey, dialling down his gonzo mania to an unprecedented degree, is perfect as the shy and gentle Joel, bewitched by this explosive presence in his life. Winslet is electric – cranky, brittle, damaged but also caring and playful. Kaufman’s film shows they hurt and snap at each other, but also that they bring each other happiness they can’t get anywhere else.

So, it comes back to that question: do we accept that part of the price of loving and living is pain? That the people who we love the most, are the ones that may also hurt us the most. The film is also clear that love can’t be forced or replicated. In the ‘real world’ Clementine is being wooed by Elijah Wood’s creepily needy techie, using his records of her romantic memories of Joel to replicate their special moments. The falseness of this isn’t a remote match for the true emotion of the real event: and it’s a testament to the film’s commitment that you can’t forge or force love, and that eventually it might just find a way.

Because, even without our memories, will we still be drawn towards the same people? Can love in fact survive, even if you don’t know who the person who love is anymore? It’s another fascinating thread in this film. Romantic couples throughout find themselves drawn to each other continually, a subconscious emotion surviving the purging of actual memories. It adds even more to the horrific trauma of seeing what’s happening to Joel here. His obvious distress as he realises the implications of what he rashly asked for – and there is plenty of suggestion Clementine feels the same – gets worse and worse as he realises he has signed away his own rights to decide who he loves.

Those ethical questions – is it even possible to make an informed decision here about lobotomizing your memory – mix with those philosophical questions of what makes us what we are. Will Joel and Clementine be the same people or not after this operation? How will they adjust to losing such a hugely important part of their histories? Especially as they won’t even know that they have. Kaufman’s script explores this all carefully, but never once losing track of the emotional story driving it.

So Eternal Sunshine becomes a touching love story, about two people going to huge ends against impossible odds to stay together. That, I think, is what lies behind its appeal. What makes it one of the most lasting films of the 00s is the invention and flair the story is told with – Gondry’s direction and its non-linear structure all only add to the fabulous script from Kaufman and Gondry – and the way it very lightly tackles a whole host of fascinating ideas while never losing track of its nature as an entertainment. It’s a brilliant film.