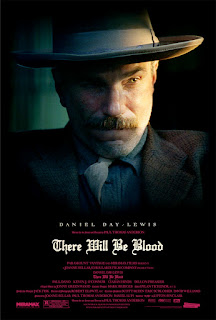 Citizen Kane’s original title was “American”. David Thomson observed perhaps there hasn’t been another film so deserving of that title until There Will Be Blood. This is one of those once-in-a-decade films, possibly the greatest American film of the twenty-first century and Anderson’s career-defining masterpiece. It’s a gripping exploration of what makes America tick, captured within the self-destructive greed and hunger for power of one man. It’s a stunning piece of work, a cast-iron masterpiece, that takes a stack of influences and reinvents them into something fresh, daring, bold and above all unrepeatably unique.

Adapted very loosely from Upton Sinclair’s novel Oil, the film follows thirty years in the life of Daniel Plainview (Daniel Day-Lewis), a misanthropic and fiercely ambitious empire-building oil man. Running a ‘family business’ with his adopted son HW (Dillon Fraser) – the boy’s father having been killed in a drilling accident – Plainview takes up a sea of leases across California. The film focuses on his exploitation of a rich seam under the community of Little Boston. A very religious community – dominated by the strong-willed Eli Sunday (Paul Dano), almost a mirror image of Plainview’s monomania – Little Boston becomes the setting for Plainview’s struggles with men and land, in a growing cacophony of drama that inevitably (as the title promises) builds towards an explosion.

Watching it you can see the inspirations. It reflects The Treasure of the Sierra Madre (which Anderson watched endlessly in preparation) in its chilling exploration of the impact of greed and Plainview is the grandfather of Charles Foster Kane. It’s set in a Fordian west, but filtered through the unique vision of Kubrick. But it’s not a slave to these: it’s a truly original work, an off-kilter epic, shot with a stunning beauty that’s half poetry, half gothic horror by Robert Elswit. It sounds like no film ever made, a deeply unsettling score that mixes discordant rhythm and baroque-inspired strings by Johnny Greenwood.

And it has two geniuses at its centre. Anderson, a director best known for large-scale ensemble pieces, inverts his style to focus on one single misanthropic force of nature, a man who sees people as only tools or rivals. His film hits every note from near silent-cinema expressionism, to Grand Guignol fever-dream intensity. It’s shot with an all-consuming urgency, long-takes of fluid camera movement, mixed with interrogative still shots. The film digs itself into your soul, takes hold and doesn’t let go. It’s at times as darkly funny, as it is horrifyingly bleak. No one else could have made it.

And no one else could have played Plainview. If There Will Be Blood cemented Anderson as one of the leading directors of the early 21st century, it confirmed Day-Lewis as the era’s greatest actor. Day-Lewis is beyond superb here: this is the sort of, epoch defining performance you see only a few times in your life. Hunched forward, like a man constantly on the move, dark eyes gleaming and his voice a malevolently rolling John-Huston inspired baritone, Day-Lewis makes Plainview a misanthropic monster. He’s articulate, instinctive and destructive. Achieving his dreams only makes him even more inhuman and bitter. And Day-Lewis makes clear the stunted, half-grown creature under the skin of the confident businessman. 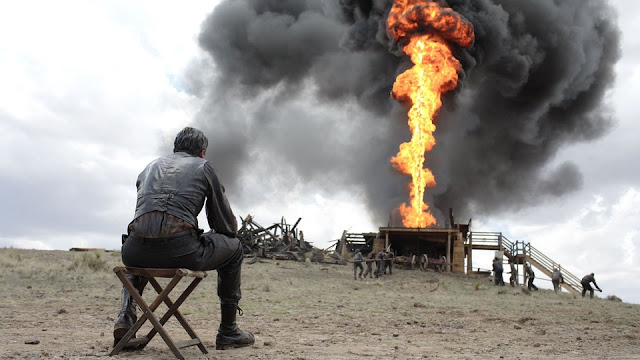 It’s clear he’s desperately lonely, but seemingly only has enough humanity in him for one relationship at a time – even then, people still must serve a purpose. HW – and later Henry, the man who arrives on his land claiming to be his brother (a wonderful inscrutable performance from Kevin J O’Connor) – become props in the family business. Plainview reaches out to them for emotional connection, but it’s all one way. When an accident robs the young HW of his hearing, Plainview is incapable of caring for him – he treats the deafness like a betrayal. He banishes HW, just as he will banish and punish all those who he sees as betraying him, including Henry. There isn’t a scene that doesn’t have a piece of performative magic from Day-Lewis.

Alongside this genius, Anderson’s subject is America. It’s a stunning exploration of how capitalism, greed and an insatiable hunger for more – be it money, land, power or anything else worth a jot of value – has shaped the country. Plainview is the dark soul of pioneering American entrepreneurial spirit, obsessed to the elimination of anything else, with accumulation. Oil is the life blood of the country, God’s own gift of power wrapped in a dangerous black liquid. It’s pumping through the country’s soil, and to control it is to control the country’s circulation. It’s Plainview’s faith – and it’s the faith of all these men forging an empire out of the ground, motivated by the desire for more. It’s partly why the film is so focused on men – because it’s always grasping men like this, titans of industry, who shape the dark soul of our civilisation.

Nothing will please Plainview until he controls all around him, confessing in a quiet moment (there are no words for how brilliantly unrepentant, yet also strangely regretful Day-Lewis is in this underplayed scene) that he has “a competition within him. I want no one else to succeed. I hate most people.” Like the country itself, he has forged himself from nothing through naught but will-power and a determination to never know failure. There Will Be Blood argues that, much as we might want to think otherwise, America is built on the backs of men like Plainview – monsters with the vision and determination to turn a desert into a city.

God himself has no place in these calculations. Anderson contrasts the obsessive sweat of Plainview with the dogmatic and vainglorious Christianity of Eli Sunday (a brilliantly weasly Paul Dano). Eli’s church is a haven of evangelistic worship and showmanship, which Plainview immediately finds disgusting (does he recognise another expert peddler of bullshit?). Eli has a moral arrogance and as much as a desire to control as Plainview, and the battle that grows between these two for dominance not only shows the ruthlessness of both men, but also reflects the struggle between religious obligation and Mammon that has run through America’s history.

The rivalry between the two men revolves around three crucial confrontations. Having effectively robbed valuable land from Eli’s family for a pittance, Plainview then humiliates Eli, forcing him head first into the mud, refusing to allow him any influence over his dig. Eli’s revenge comes in spades: controlling a vital piece of land for Plainview’s pipeline, he demands Plainview comes to his church to be rebaptised. The resulting scene sees him goad, provoke and demean Plainview for his sins, forcing Plainview into a series of humiliating confessions (both actors are earth-shakingly brilliant). 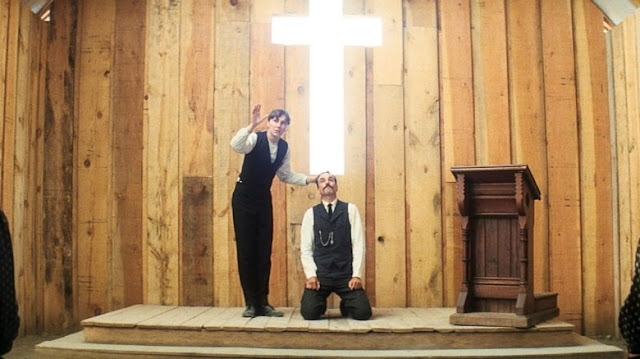 Their final reckoning closes the film – and is both its most controversial and overblown sequence. Jumping forward fifteen years, to Plainview’s sprawling mansion (where Day-Lewis has become a dishevelled hermit, his misanthropy unchecked and his victories only confirming his loathing of humanity) it’s the famous ‘milkshake’ scene, played with the sort of OTT intensity only Day-Lewis could risk and which the film has carefully built us towards accepting. Blood-dripped in a Kubrickian setting of a bowling alley, it’s the final expression of two men’s mutual hatred and views of a world – Eli’s that it owes him something for his faith, Plainview’s that he controls it through will alone.

Only a film that has built on such firm grounding of escalating tension and excess could make such a scene a success. This is a film that starts with a near-silent 15 minutes, of Plainview hammering with a pickaxe obsessively in the belly of the country’s soil. It ends – after a long journey that has seen Plainview wheedle, steal, bully and grasp – with him entombed again, this time in his mausoleum of a home, no daylight allowed and the air filled with Plainview’s hate-filled rants. Along the way, we’ve seen the plains of California as a place of dreamy beauty, marshalled to the will of one man to control all around him, scenes of striking beauty and haunting intensity.

There Will Be Blood is a masterpiece, an inspired parable for American history, a showcase for one of the greatest actors of his generation to redefine his craft and a marvel of character study, epic vision and haunting lyricism from its director. There is not a false note in it and it stands towering as a landmark in American film history. The greatest American film of the 2000s? Possibly yes.