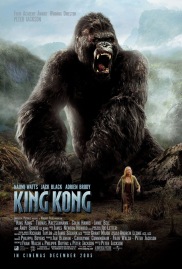 In the late 90s Peter Jackson was working hard on putting together the plans for his dream project. It was a complex project, with unprecedented special effects demands, a huge cast, a demanding shoot and a big budget. However, plans fell through, so Jackson decided to move his attention to that Lord of the Rings trilogy idea he had been banging around instead. Hot of the success of that little escapade, he delivered at last his dream: a huge remake of King Kong.

Carl Denham (Jack Black) is a ruthless film director, desperate to make the big epic that will dwarf all others. Pulling together a team including playwright Jack Driscoll (Adrien Brody) and vaudeville dancer Ann Darrow (Naomi Watts), he heads out on a ship for location shooting on the mysterious Skull Island. Arriving on the Island, they find that the savage natives aren’t the only dangers on an Island that has bypassed evolution. The crew find themselves hunted by dinosaurs, huge creepy-crawlies and other horrors all while they try to find and rescue Ann from the Island’s Alpha – a huge gorilla, King Kong (famously motion-captured by Andy Serkis). Led by Jack, who has fallen in love with Ann, dangers surround the crew – but is mankind, and the ambitious Carl, the real danger?

Time and public perception has not always been kind to Jackson’s labour of love. Perhaps coloured by the generally negative reception to his Hobbit films (which are a mess), perhaps also by the film being more of a gentle, sentimental film mixed with cartoon-splatter horror rather than the monster-mash B movie later Kong films have been, it’s generally remembered as a bit of a disaster. This is far from fair. Yes it’s overlong (hugely so at well over three hours – nearly twice as long as the original) and over-indulgent but it’s also quite a sweet, if rather tonally mixed, film that more or less manages to keep an audience entertained.

Unlike later films which have enjoyed Kong (or Godzilla) most when he smashes things – even if he is often the film’s hero or at least anti-hero – this Kong film is perhaps at its most contented when it is finding the humanity in the ape. As a 9-year old, Jackson talks about crying when Kong fell dead from the Empire State Building – and it is this engaging giant that he wants to bring to life here. Using Serkis – cementing his reputation here as the whizz of motion capture – to have a human literally inside the Gorilla, giving real expressions and genuine character to a giant ape was deliberate. The film’s most heart-felt – and quietest – moments both involve moments of gentle play or innocence from the Gorilla, either starring at a beautiful sunset (which he does both on the island and on the Empire State) or playfully slipping and sliding on a Central Park frozen lake, this is a monster that Jackson sees as a misunderstand soul, that bond he felt at 9 brought to the screen. 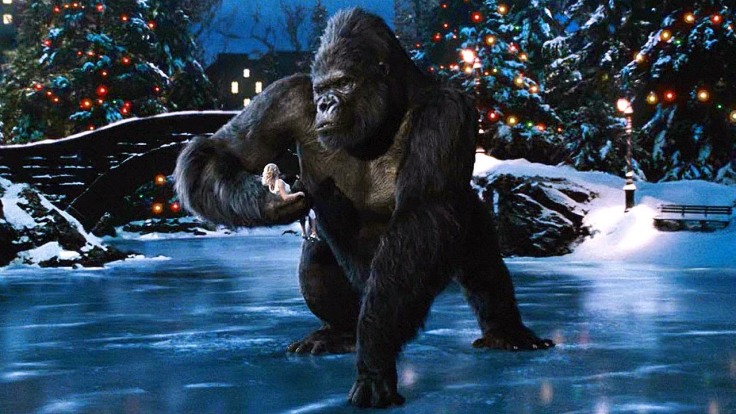 That’s the key between the bond that Ann feels with this beast who starts as potential killer, becomes protector, friend and finally a sort of romantic interest of a kind. Well played by Naomi Watts, Ann Darrow herself is a damaged soul, a bright-eyed, naïve dreamer with a dose of realism slowly entering her soul, who wants to entertain people but also to make her immediate world a better, warmer place. It’s natural that such a person would start to feel a deep bond with Kong, to learn to appreciate his gentleness and protectiveness, to put herself at risk to try and save his life. It’s a huge development of the character from scream-queen, and positions Ann (or tries to) as a more pro-active force in her own story.

And the ape responds to this, slowly revealing his own true nature as a potentially gentle giant, albeit one who is prepared to rip a few T-Rex’s apart to protect his love. He certainly ends up feeling more of an ideal partner for Ann than the other men in the film. Adrien Brody’s Jack Driscoll is a determined, principled and brave man but there is a touch of inadequacy to him, a surrendering of responsibility and a lack of proactivity in his make-up. While the early love story between the two characters is sensitively drawn, it tellingly can’t survive the events of Skull Island – at least not in the same way.

Mind you Driscoll is better than Denham, who is transformed in this film to a soulless monster interested only in his own greed for fame and power. Jack Black delivers what the script demands – even if the film is pushing on the edge of his range. As Black’s stock has fallen, so perhaps as some of the film’s – and the perception of his performance here. It doesn’t help that the idea of the ruthless film director seems to be a common trope for film director’s to explore (and interesting psychological question there!) so the character’s shallow lack of regard for anyone else, coupled with his fierce ambition to be the greatest showman around start to grate after a while. It’s a character lacking any depth.

But then that’s the case for most of the rest of the cast as well, who struggle to make room in a film that is overloaded with events and action to the detriment of its overall impact. Jackson’s heart may really lie in the quiet moments between beauty and beast – but he also loves an action scene. And King Kong has too many of these. Much of the middle hour of the film is given over to a never-ending parade of events on Skull Island, that after a while seize to have any real impact. As nameless crew members are crushed by boulders, or stampeding dinosaurs, or savaged by giant insects, or have their heads caved in by savage islanders (not surprisingly these H Rider Haggard style savages, with their lust for human sacrifice, drew more than a little criticism – and it hasn’t aged well) you start to feel your interest sagging. Kong’s brawl with three savage T-Rex’s is perfectly made in every respect, except for the fact it goes on forever.

Ambition lies behind every frame (all of them beautiful by the way) of this huge three hour epic monster picture – but it gets all so much that it buries the story. Like Kong himself, it touches the heavens only to fall tragically to Earth, trying to protect the thing it loves. Jackson wants to protect Kong from being just seen as a massive ape that hits things – but loses his way at times when Kong does little more than exactly that. It is still an intelligent and heartfelt film – but it struggles as well with being an uncontrolled play in the sandbox.